After two manic days with exhaustingly spectacular performances from the Kaiser Chiefs and Catfish and the Bottlemen, the Boardmasters organisers rightfully decided that Sunday should be a more chilled affair. We placed ourselves further back to the Main Stage, where we could sit and bathe in the sunshine, while listening to some great acts.

The start of the day was dominated by two Bristolian rising stars. The first was band Coasts, who took the Main Stage mid-afternoon for a set that included their big numbers ‘Oceans’ and ‘Modern Love’, along with some more obscure tracks from their eponymous debut album. The second was possibly my favourite performance of the entire weekend – as Raleigh Ritchie took to the more intimate ‘Land of Saints Stage’, for a modest, and criminally short, half an hour set. 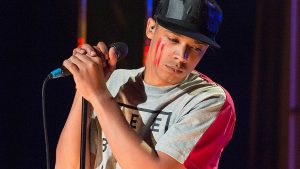 Raleigh Ritchie, better known Game of Thrones‘ Jacob Anderson, has been around a while, he is only just finding wider success with the release of his album You’re A Man Now, Boy earlier this year. Now, with the album being one of only two things I’ve ever given five stars, I was naturally very excited about seeing him live; and he did not disappoint. The smaller venue really suited his style of performance, which drew a devoted audience of fans in, to the point that they continued chanting his closest number, ‘The Greatest’, after Ritchie left the stage and everyone vacated the tent. Moving him away from the Main Stage only enhanced his set, as everyone in the crowd already seemed to know Ritchie and his songs, or left the tent converted to his fanbase.

After Raleigh Ritchie, we rushed to the Unleashed Stage to catch the last 15 minutes of MNEK‘s set. The young singer and producer has recently risen to chart prominence, and closed the set with his number one ‘Never Forget You’. Though the song was a diminished affair without its feature, Danish singer Zara Larrson, MNEK’s vocals can hold their own, and the tent was buzzing from his great vibes.

Trying to cram in as many acts as possible has its disadvantages. Having only seen 15 minutes of MNEK, we returned to the Main Stage over halfway through Primal Scream‘s set. However, what little I did see of them was very good, and fitted with the more chill, retro vibe of Boardmasters’ Sunday. We also caught Soul II Soul, who generated a far smaller audience than Friday and Saturday at the Main Stage, but still had people on their feet dancing to their classic, ‘Back to Life (Back to Reality)’. 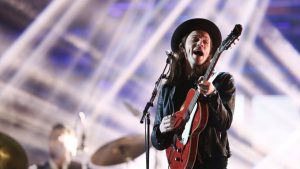 The entire festival closed with Cornish talent James Bay‘s first ever headliner set. Taking to the stage, he admitted his nerves for the event, but proceeded to perform a great set. My only criticism was that the majority of hits seemed to be performed at the start of his show, resulting in a rather lacklustre and slow second half, before he closed with the iconic ‘Hold Back the River’. Despite this, it was impressive to see a low-key, largely acoustic singer like Bay perform such an enthralling rock-n’-roll set.

Boardmasters 2016 was undoubtedly its strongest year yet. Having acts like the Kaiser Chiefs and James Bay has widely increased its profile, and its fans are always drawn to the idea of a week spent catching waves and sunrays on Cornwall’s beautiful beaches. From now on, Boardmasters is playing with the big guns.

Boardmasters’ 2017 dates have been confirmed for 9th to 13th of August.