Picture this: the year is 2012, the summer Olympics has just wrapped up in London and the end of the world, according to the Mayans, is fast approaching. But on November 10th, a far bigger, better, more anticipated and more spectacular event is about to take place. The air is sharp and brisk, the shade of autumn blending gradually into winter, as I huddle with a friend outside Alexandra Palace, surrounded by thousands of other people all dressed in various shades of black and interspersed flashes of neon, many with wild, backcombed hair and all with stupid, gleeful smiles plastered across their faces. But of course! Today is the day that Vans Warped Tour returns to the UK after over a decade of staying stupidly far away from it. Man, you really chose the right year to return, didn’t you Warped Tour. End of the world? Psshh, who cares? Warped Tour is back!

Making friends in the queue with the chivalrous offer of chips, we soon found ourselves inside, still huddled and consulting our stage times guide. 2012 makes Warped Tour my first ever festival – and, to be absolutely honest, I had only really come for Bowling For Soup. But alas, stage times clashed so we did away with the guide and headed straight for the Monster Energy West Stage, to sort of just… ‘go with it’ for the day. #Yolo was popular in 2012, right?

The Story So Far gathered a fair amount of fans and intrigued passers-by, somehow placed far too low on the bill. Breaking into a rendition of ‘Gangnam Style’, they transformed the crowd from slightly intrigued to completely amused, most people breaking into their own ‘Gangnam Style’ dances. Remember when ‘Gangnam Style’ was the coolest thing around? Anyway, the guys proved to be just the bit of fun and energy to kick off the day with a spark.

Everyone’s favourite electronic duo, 3OH!3, sprung on stage soon after with what turned out to be one of the, 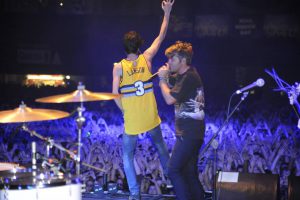 unexpectedly, best sets of the day. Sliding into hits like ‘Don’t Trust Me’ and ‘Starstrukk’, they ran, jumped, climbed all over both the East and West adjoining stages, turning their electronic vibe into a heavier, punked-up sort of sound, perfect for Warped. Cue drum solos, headbanging, and all things rock n’ roll.

After a drawn out half an hour of waiting, New Found Glory soon took to the stage, literally sprinting on in matching gym gear and diving straight into ‘All Downhill From Here’. The first time I had ever reached the barrier, I could feel the first heaving mass of the day, screaming for the pop-punk veterans as they lit up the stage with the most energetic set of the day so far. ‘WE LOVE YOU NEW FOUND GLORY’ screamed two eager fans at the front half way through their set, between songs. Frontman Jordan Pundik appears not to hear, but smiles with what I could only infer as gratitude as they swoop into loved-by-all hits ‘My Friends Over You’ and ‘Anthem For the Unwanted’ before sprinting back offstage to a thunderous applause.

As a last minute addition to the Warped lineup, the hype for The Used was slowly building yet still, most had no idea what to expect from the Utah-born quartet. Thankfully, the group, at the time celebrating the ten-year anniversary of their debut album, proved to be still going strong. With such an extensive career behind them, their set seemed to act as a tribute towards their past, staying more in the realm of the familiar and loved than edging into creating an extensive map of their, then, new stuff, with a passion and exuberance to rival even our headliners of the day.

But alas, the time was edging closer and closer to what we’d all been dreaming of for years. Okay perhaps not everyone, perhaps not my friend who I had dragged from Bring Me The Horizon’s set to the Jägermeister stage in order to get to the front for Bowling for Soup’s set. Perhaps just me. Perhaps. Anyway, the time had come – my first ever favourite band, the band that had formed the gateway to all things punk-rock for me, ‘the band that waved back’ – Bowling For Soup ran on stage and the crowd erupted into thunderous cheers and screams. ‘What’s up, warped tour UK?’ frontman Jaret Reddick remarked, before diving into ‘My Hometown’ to the more than appreciative cheers of the crowd below him.

The giddy, sing-a-long chorus of ‘High School Never Ends’ and the punchy riffs of ‘Let’s Go To The Pub’ shot through the air like an arrow from a bow, with the band never letting a dull moment intrude upon their fun. Simply put, BFS’ set was the most fun I’ve ever had a gig before. Offering an anecdote about the time they were mistaken for Fountains Of Wayne, Jaret quips “Hey! We’re not the ‘Stacy’s Mom’ guys, we’re the ‘1985’ guys! But then again, if you can’t beat ‘em, join ‘em”, before leaping into, of course, a rendition of ‘Stacy’s Mom’.

And then, it happened. A bit of backstory here, for some reason I decided to wear this stupid hat which was rudely 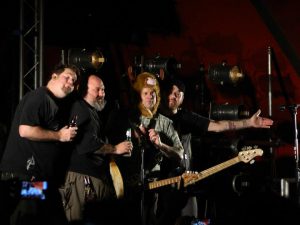 large and in the shape of a moose, complete with horns. Four years on and I still have no idea why I wore it to Warped Tour, but I am so glad I did. Minding my own business, happily watching from the barrier, Jaret suddenly turns, between songs, and points at me. “Hey! Can I wear your hat?” he says to my shocked, internally-freaking-out face. I nod vigorously enough to disconnect my head from my neck and throw over the hat, which he wears for two songs before giving it back and diving into the finale, ‘1985’, finally. Jaret Reddick, you just made my life.

And so, Vans Warped Tour came to an abrupt end. The 10,000 fans trundled out towards waiting parents, and cars, and the train station down the hill, covered in sweat and pure, passionate, unadulterated glee. Four years on and Warped Tour hasn’t returned properly to the UK after 2013, and I don’t blame it. It may have been away for thirteen years but it sure didn’t lose any of its prowess or passion in the time it was gone, diving straight into what will always be one of my most memorable days. How could it ever top that?