Read more
You are at:Home»Live»Review: Grad Ball 2016
By Rebecca James on June 8, 2016 Live, Reviews
Monday night saw the return of Grad Ball, the end of the year celebration for graduating students run by the Union, and it was a fantastic success.
For the first time, this year’s Grad Ball took place at the O2 Guildhall Southampton, one of the south coast’s top locations for touring bands. Far from the usual venue of Oceana, the change of venue proved to be a great choice to give graduating students a taste of a different kind of evening. With funfair attractions outside, and a series of acts on the stage inside, there was plenty of opportunities for students to celebrate finishing their degrees.
Without a doubt, the outside funfair attractions were one of the best parts of the whole night. There is something intensely appealing about driving around madly in a dodgems car, particularly when you have several friends attempting to chase you down on the attraction at the same time as you. Similarly, the spinning ride was great fun, allowing three of you to sit side by side as it flung you about – although anyone who sat on the outside of their bench, was likely to get very squashed as the ride sped up. The final ride, the Paratrooper, sent riders flying around into the circle, and when you stopped at the top you got a fantastic view of the Guildhall and the outside attractions. Alongside them were food carts and several funfair attractions, like a penalty shoot-out and shooting gallery. While it was great to see some additional bits added to the outside space, it was clear that the funfair rides were by far the most popular, with long lines throughout the night. 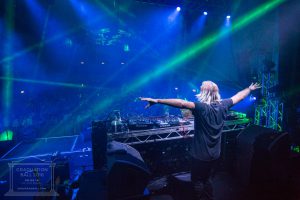 Image via The Union Southampton, Hattie Hall and Oli Crump

Inside the Guildhall, there was a Photobooth which not only took four pictures of you and your companions, but also created a gif – many of which were shared on Facebook throughout the night. Beyond this was the main stage where all of the acts of the night performed. A DJ set by Clean Bandit, followed by a set by DJ Fresh provided plenty of great tunes for the many gathered in the Guildhall, however it was headliner Subfocus who seemed to read the crowd best, playing song after song – all of which got a fantastic response from all of the students gathered there. His great understanding of the music that everyone wanted to hear, dropping the beat at exactly the right time with expert mixing, made his set the best musical part of the night.

However, the biggest surprise of the night was Masseoke. Beforehand no-one seemed to know what it was, and a set placed earlier in the night when most people were outside on the rides meant that most people missed it, however Masseoke returned at the end of the night, and proved to be a perfect closer. With a large screen in the middle of the stage providing lyrics like any other karaoke, and a live band playing crowd pleasing songs, finishing the night at 2am, singing ‘Bohemian Rhapsody’ alongside some of my best friends was certainly a great way to say goodbye to everyone who is graduating this year. 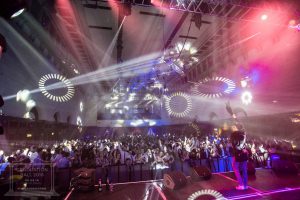 Image via The Union Southampton, Hattie Hall and Oli Crump

A small criticism would be that there was very little space to sit down and talk, with many people ending up sat on the steps outside the Guildhall when they wanted to chat and catch up with anyone. Additionally, if the main act wasn’t to your taste, there wasn’t any other place to dance or listen to any music – I think if something akin to the Disco room at Oceana, or a silent disco, could be added for next year in another part of the venue, it would be greatly appreciated, as one of the best parts about previous Grad Ball’s has been dancing with friends to the music that you grew up with.

While there were a few small issues, I think this can easily be put down to the fact that this was the first year at this new venue – I have no doubt that next year these will be addressed. I think that the selection of venue gave the night that extra bit of sparkle which has often been lacking at Oceana, and you could see on the faces of the people there that they had a great time.