Read more
You are at:Home»Live»Throwback: Fall Out Boy at Islington Academy, 2013
By Sophie Trenear on February 25, 2016 Live, Reviews, Throwback

I’ve seen the Chicago born four-piece – fronted by Patrick Stump, along with Joseph Trohman on lead guitar, Pete Wentz on bass, and Andy Hurley on drums – several times now, but their best gig, in fact one of the best gigs I’ve ever been to (overtaken by only the most recent Fall Out Boy gig I attended back in October 2015), was without a doubt the tiny – rather impromptu – gig they played at Islington Academy the year of their return. With Islington Academy holding a mere 800 people, not being one of the first fifty in line proved to be a futile concern. Even turning up ten minutes before doors, if you were lucky enough to get tickets, would offer a better vantage point than probably most of the gigs you’ve been to. I know I’ve never been closer, before or after. 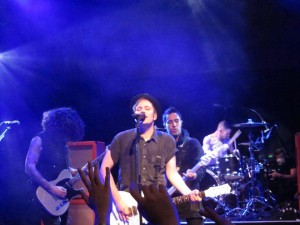 Renowned for their energy and Stump’s unrelenting vocal efforts, FOB didn’t disappoint. Opening with an electric rendition of ‘The Phoenix’, the entirety of the floor exploded. As Stump flew into his penultimate, towering “Hey, young blood”, we pushed, we flocked, we were pulled forward towards the band as if it were the only thing that mattered. And it was there that we stayed for the remaining two short hours.

I doubt there was any one person in that gig who didn’t sing along to every last word of every last song, or at least try for lack of breath. My sister, my friend and I were all separated, reunited and separated all over again, and I say that like it matters. It didn’t.

All that mattered was every individual on that tiny floor felt connected to every individual word, every single song, as if it were the only voice. Fall Out Boy’s hearts may “beat for the die-hards” but right at that moment our hearts were beating at 120bpm for them, and only them.

After a screaming, glorious show, Fall Out Boy closed with an encore of ‘Save Rock and Roll’, ‘Thnks Fr Th Mmrs’ (complete with their iconic ‘guitar swings’ – which, to be frank, have to be carefully coordinated, else how do they not throw every instrument, piece of equipment, fellow band members, off the stage as they jump and spin seemingly mindlessly? The talents of a rock star, I guess) and a final, elated ‘Saturday’.

And as a few of us waited after the show to see them leave the building, we could hardly speak. It was only the looks of wide-eyed disbelief, complete and utter elation that confirmed it; this was the best gig any of us had ever been to, one of the best experiences of our lives.

And as they left, pushed by their security into their cars, Stump, Wentz, Hurley and Trohman each grinned, waved to us, thanked us.

Yes, Fall Out Boy may have left us for three years but the grins on our faces, the grins on their faces – it was almost as if they’d never been away at all.