If there’s anything better than a lazy afternoon in the sun, it’s a lazy afternoon in the sun with some of the biggest names in rock and indie music soundtracking your day. Set within London’s iconic Finsbury Park, Community Festival 2019 will provide just that come June 30th, with bands such as The Kooks, Blossoms and The Amazons all looking to electrify your evening. 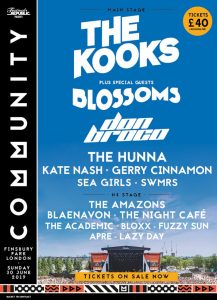 A self-described “one day celebration of the best in new music”, Community has made a name for itself in the increasingly crowded festival market of recent years as the place to see our favourite contemporary indie bands, from 2017’s headliners Catfish & the Bottlemen to last year’s Two Door Cinema Club, The Vaccines and Circa Waves. This year, it’s time for The Kooks, Blossoms, and Don Broco to make us cheer on the main stage; if performances from their recent tours are anything to go by, you’ll be going home with your head ringing in just the right way. With the wide-open main stage as their canvas, it’s all set to be an intense and explosive evening, with hits like ‘I Can’t Stand It’ and ‘Naive’ sure to enthrall the crowds and build an incredible atmosphere of sheer indie-rock delight.

But there are gems lower down the festival billing, too. Don Broco’s brand of heavy indie rock is the perfect warm-up to the powerful energy that Blossoms and The Kooks will certainly bring, whilst rising stars The Hunna are no strangers to a main stage and will be wanting to celebrate the success of their second album Dare. Meanwhile, rock-electronic experimenters SWMRS, Scottish indie singer-songwriter Gerry Cinnamon and the effervescent Kate Nash look to be perfect afternoon-filling acts in what will hopefully be glorious London sunshine.

But if you’re looking for something slightly different, there is always the N4 stage, which The Amazons are set to headline. Coming just weeks after the release of sophomore album Future Dust, expect their set to be exciting, intense and most of all heavy. The Amazons are real gems in the British rock scene and well-deserving of their headline spot on Community’s second stage. Earlier on in the day, look out for more chilled-out vibes in the ephemeral Blaenavon and upbeat summertime afternoon vibes with Fuzzy Sun.

With such a fantastic and varied set of acts all performing across one afternoon and evening in one of London’s most picturesque parks, Community Festival seems certain to reach new heights in 2019.