Farr Festival is now in its seventh year, and will be held in a space of deserted woodland in Hertfordshire (just 30 minutes away from London) between the 16th and 18th July this summer. This year promises to be brighter and bolder than ever before. 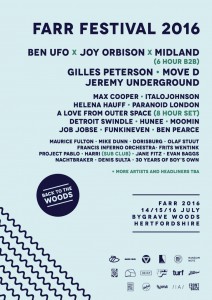 The lineup so Farr

The boutique festival began its life in 2011, when an extended party spiralled into a 600 strong two-day fiesta in the woods. Since then its success has spiralled, gaining more critical acclaim and even bigger names to its line-up. 2015 brought Âme, DJ Koze, Heidi, Waze & Odyssey, Future Garden and House of Disco to the eclectic spectrum of music. Likened to the vibe of BoomTown and Secret Garden Party, this year’s lineup so far entails a DJ set from Jungle, Ben UFO, John Talabot, Ben Pearce, and Chelou.

Although Farr Festival is growing every year, organisers have promised that it will stay true to its roots and continue to be the intimate festival that it has made its name for. Tickets are still available, so venture into the woods this summer for a magical weekend of music with Farr Festival.

For more information on the lineup, tickets, venue and anything else, visit Farr Festival 2016’s website by clicking here.