Bastille are back with their series of intimate gigs to promote their fourth album, Give Me The Future, which, after releasing on 4 February 2022, is now at number 1. The gig had around 500 people attending and having been to several ‘intimate gigs’ before including one of Bastille’s, this genuinely felt friendly, intimate and chilled out. Another great initiative is that the whole tour supports independent record stores and music venues. In Southampton’s case, it was run through Vinilo Record Store and was an outstore event at The Brook. Supporting these local venues is especially important given the recent pandemic. Before I start the review, I think I should put a little disclaimer that Bastille are my favourite band, I have seen them live about 7 times, and so I may be a little biased but this was genuinely the best gig I’ve ever been to… and I’ve been to a few. 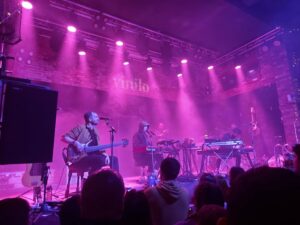 Firstly, I felt fairly covid safe, very few people were wearing masks, but they were checking Covid passports and negative text confirmations in the queue before we could enter the venue. The venue, The Brook, is gorgeous. It’s only about a fifteen-minute walk from the University of Southampton Highfield Campus so is a great local gig venue for students. It was spacious, across two floors, with two bars and a good view of the stage from pretty much anywhere in the venue. I loved the fairy light decorations and the fact they sell Pieminister too.

The gig was genuinely the most unique, engaging and beautiful concert I have ever been to. The tour is a stripped back, intimate and interactive set that changes slightly with each performance. The band members switch up each night, Southampton saw Dan Smith and Will Farquarson with special guest, Charlie Barnes. Smith’s stellar vocals, Farquarson’s guitar and Barnes’ stunning piano and fun use of looping and recording made the music sound chill, very different to the sound of the album and much like an MTV unplugged style set. I really enjoyed that. The iconic techno style of the new album is still fed into the show but overall, it was far more acoustic and stripped back than their albums and usual gigs. 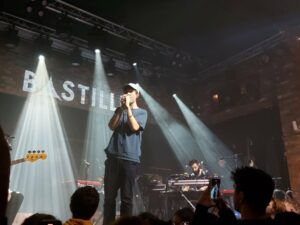 The interactive elements were really unique and enjoyable. On the way in I was asked if I’d like to ask the band a question, a few were then read out and answered. In the queue, some people were asked for their weirdest dreams that were then incorporated into their performance of Give Me The Future. I have never heard people’s dreams about being trapped in Tesco by their English teacher sung through a techno filter as the verse of that song before… or any song for that matter. I thought it was a funny and unique way of involving people in and promoting the album which is about dreams and technology. The audience, and people online, were also able to influence the set. Some songs were, of course, set in stone but, at one point, we were given two options and we had to shout the loudest for the one we wanted. Good Grief was chosen which was beautiful. One song was based on requests prior to the concert via Instagram too.

The atmosphere of the concert was great too. The stand-up comedy like chatter of the band involved the audience and was really fun. It felt like being in a room with loads of friends. Both these more structured chats and the improvised Q+A sessions and the dream song, which had the band laughing so much they had to stop singing several times. This made the concert feel very intimate and personal compared to usual, giant gigs. 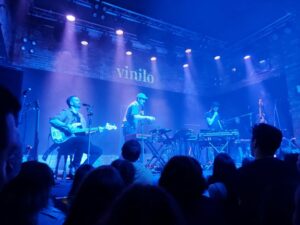 Overall, I genuinely think that the Bastille gig at the Brook was the best concert I have ever been to. It was laid back, intimate and personal. The stripped-back version of the songs were genuinely beautiful and the venue was gorgeous. To make it better, this and the whole tour, supports independent record stores and venues so is doing great work after the pandemic.