Reading Festival has still got it - with plenty of focus on smaller up-and-coming acts as well as big names, there's something for everyone here.

The third and final day of Reading Festival began slightly differently, with a trip to the NHS “on the move” vaccination van, where I was able to get my second COVID-19 vaccination early – a great initiative to encourage young people to get their jabs. 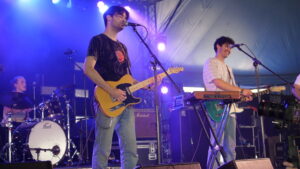 After that, it was into the arena for the final time. There was a significant change in the energy throughout the site; festival-goers were no longer decked out in party outfits, and instead were in hoodies and joggers, with hungover looks on their faces. Despite this, opening act Blondes on the Festival Republic stage still managed to get people moving with their sweet indie-pop tunes – even managing to get people to take their shirts off and wave them in the air for their last song.

Next up was Brighton fourpiece FUR, who stepped onto the BBC Introducing Stage looking (and sounding) like they had come straight from the 70s. Their sound is an effortlessly enjoyable vintage one, which harks back to the golden age of pop song writing. 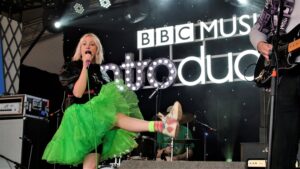 The BBC Introducing Stage had a great roster of acts throughout the day, as next up was Isle of Wight local Lauran Hibberd, who smashed out her set of slacker pop with effortless energy and confidence.

Keeping the day’s theme of up-and-coming artists going, we headed over to the Festival Republic Stage for Baby Queen, who wowed the crowd with her catchy pop songs and infectious attitude – despite it only being her second live show ever.

We then made our way through the crowds of rowdy Liam Gallagher fans to catch Wolf Alice, who brought some much-needed grunge to the stage. Lead singer Ellie Rowsell has gained much confidence over the years, and won many of the uninterested Gallagher fans over with her incredible vocals.

The evening wound down with Holly Humberstone and Josie Man. Humberstone’s soft voice and combination of electronic and acoustic sounds made for an emotionally honest set, which had the crowd swaying in appreciation. Lastly, adorable pop singer Josie Man graced the BBC Introducing Stage with good vibes aplenty for a short but sweet set, including infectious pop tracks such as ‘Grow’ and ‘Colours’.

All in all, despite the drunken teenagers, messy site and overpriced food, Reading is a festival full of great music and good times – you just have to be willing to get a bit dirty to endure it.