Read more
You are at:Home»Live»Dance»Triadisches Ballett: A Bauhaus Exploration of the Human Form
By Maddie Lock on April 7, 2021 Dance, Features, Live

The Triadisches Ballett is a bit of a hidden gem in the world of ballet. It was conceived in 1912 and premiered in Stuttgart, Germany in September 1922. This ballet was the work of leading Bauhaus figure and German artist, Oskar Schlemmer.

The Bauhaus art and design movement begun in 1919, following the end of WWI, and was based at The Weimar school in Germany. It has been praised for championing “a geometric, abstract style featuring little sentiment or emotion and no historical nods”, as stated by History.com. Most importantly, the movement/school had no set boundaries between or defining the varied forms of art. They practiced textile design, architecture, woodworking, theatre design, painting, and of course ballet to name a few, all of which came back to their geometric and abstract stylistic principles. 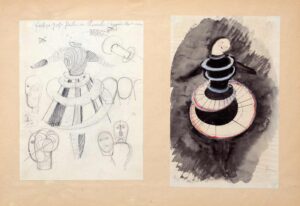 Schlemmer’s ballet featured two female and one male dancer, 18 costumes, and was segmented into three parts involving 12 choreographed sequences. Quite frankly, it is a historical masterpiece. Although not well versed in the art of ballet, even I can appreciate the beauty and storytelling within the Triadisches Ballett. Although there is no linear narrative to this performance, the overarching theme is that of exploring the body, its boundaries, and how these limits can be pushed. One way in which this exploration takes place is through the choreography, performing slow, beautiful and at times confusing movements that illuminate their exquisite and somewhat limiting costumes. Schlemmer described his choreography style as “a party in form and colour” and “artistic metaphysical mathematics”, linking back to the Bauhaus geometric themes. Overall, Schlemmer wanted the performance to leave audiences “in awe of every possible movement of the human body”, which is evident in the boundary-blurring choreographed movements of the performers. 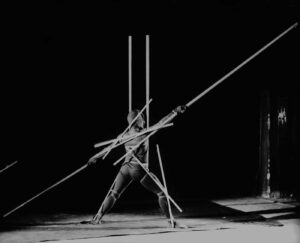 However, it is the costume design that is most enthralling about the Triadisches Ballett. They are extremely avant-garde in their design, and even without the choreography, they force you to consider the shapes and movements of our bodies. Not only are the costumes geometric masterpieces, but they are also aesthetically stunning and very unique in terms of fashion design. The colours compliment one other beautifully, the curves are wonderfully thought-provoking, and all-in-all the costumes truly make the ballet what it is – a visually engaging question of humanity and human biology. As Dirk Scheper explained, “draping the dancer’s body with movement-impending costumes was an extremely rare, even revolutionary act”, showing that the costume just as much as the choreography is what made Schlemmer’s ballet so powerful. 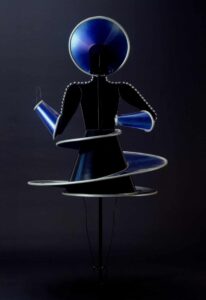 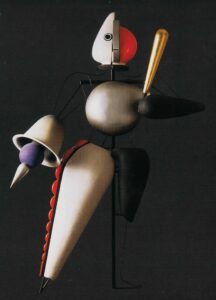 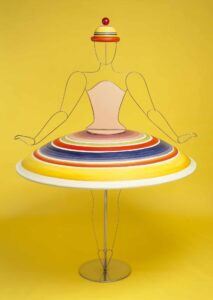 Schlemmer’s costume design is truly phenomenal and has left me staring in awe at the various swirls, curves, and mixed-material that are used to create these stunning costumes. Although the original was not recorded, thankfully int he 1970s the Triadisches Ballett was recorded. This can be found on YouTube, so if you’d like to be mesmerised by the groundbreaking choreography and design of Schlemmer, be sure to give it a watch. Although this is a recreation, with it being filmed in the ’70s it means we get to experience the colours of the staging and costumes, which arguably are what make this exploration of the body truly pop. Even if you don’t want to watch this performance, research the Triadisches Ballett, even just the sketches and designs – I promise you won’t be disappointed!