A fantastic introduction to SUSO.

SUSO is comprised principally of current university students ranging in their degree subject areas from the more obviously suited Music through to the Sciences, and to the other Humanities subjects.

The classical music on display under the energetic, but watchful eye of SUSO Music Director and Conductor, Susanna Riddell, had a distinctly Russian theme to it. Works by the wonderfully facially hirsute trio of 19th-century Russian composers Alexander Borodin, Modest Mussorgsky and Nikolai Rimsky-Korsakov were performed, including Rimsky-Koraskov’s classic, ‘Scheherazade’.

It seemed, to this admittedly completely unversed person’s ear, a clever programme of music for the night, allowing all sections of the orchestra and many individual players, the chance to showcase their talents.

Beginning the evening was a rendition of Borodin’s ‘Prince Igor Overture’. While not entirely agreeing with the programme notes suggesting that in this piece ‘Wisps of Russian folksong weave through the melody’, it certainly provided an opportunity in the middle to latter section of the ten-minute piece for the horn section to make their presence felt.

There then followed recitation of two works by Mussorgsky. The second of these, ‘Night on the Bare Mountain’, stood out the more with its deep foreboding opening. SUSO’s rendition enabled this viewer to easily imagine it as an excellent underscore to a scene of dramatic tension in Mussorgsky’s sadly unfinished opera, ‘St. John’s Eve’, which would have centred around a witches’ meeting on the St John’s Eve sabbath. The brass section as a whole seemed to particularly evoke the tension Mussorgsky sought in the piece. Meanwhile, in some of the string-dominated sections, the similarity of Mussorgsky’s work with Rimsky-Korsakov’s legendary ‘Flight of the Bumblebee’, appeared particularly striking to this audience member. 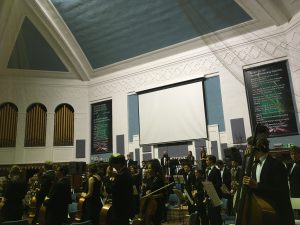 After a brief interval where most of the orchestra mingled with the audience, SUSO then performed Rimsky-Korsakov’s symphonic suite, ‘Scheherazade’, based on the famous tale in One Thousand and One Nights. This evidenced that the current SUSO have the ability to shine not just in shorter pieces, but also the skill level to impress when playing for near three-quarters of an hour with barely more than one notable pause.

It also provided a number of opportunities for solo efforts within the ensemble, with violin, bassoon and clarinet solos proving especially memorable. Indeed, recent graduate and violin co-section lead, Kath Roberts, and Bassoon section lead, Adam Melvin, excelled in the several solo parts they had. Roberts’s rendition of Rimsky-Korsakov’s violin solo parts portraying the vulnerability and gentle wisdom of Scheherazade as opposed to the menacing brass tones of the Sultan was perhaps the highlight of the evening.

The whole ensemble impressed throughout the night, all the more remarkable considering the comparatively limited time they had to practice together of just a week beforehand – apparently, the normal training period before a public concert lasts about 3 months.

Overall, the concert showed SUSO to be in rude health as its significant centenary year since foundation looms ever closer on the horizon.

SUSO ‘s next public performance is ‘Diana – A Tribute’ by US composer Lucius Craig Cervantes at the Turner Sims Concert Hall on the 11th November, 3pm.