Read more
You are at:Home»Live»Festivals»Preview: Parklife 2017
By Tom Webb on May 6, 2017 Festivals, Live

Parklife returns to Heaton Park in Manchester next month for its seventh year, kicking off festival season with an awesome, genre-spanning line-up on the weekend of 10th and 11th June. 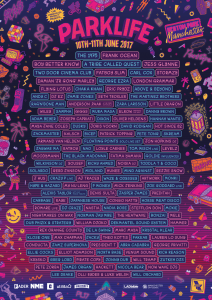 Manchester’s The 1975 headline on home turf on Saturday, fronting a Main Stage bill that includes the likes of Two Door Cinema Club, George Ezra, Rat Boy and The Japanese House.

Elsewhere, the outside stages have a largely electronic flavour but are not short of quality. Saturday’s Temple stage offering is very much grime-focused, headed by Boy Better Know and Giggs, whilst London Grammar will make a notable appearance on the Sounds of the Near Future stage. A set from Fatboy Slim on the Hangar stage will no doubt attract the masses, alongside household names such as Pete Tong.

The elusive Frank Ocean, however, is undeniably Parklife’s standout name, as the Blonde singer plays one of two UK festival headline slots this summer, gracing the Main Stage on Sunday. Ocean joins A Tribe Called Quest, Jess Glynne, Rag’n’Bone Man and Zara Larsson, and the former promises to deliver an intimate finale.

In terms of other stages on Sunday, it is hard to look past the Sounds of the Near Future stage, the line up of which gives some medium-sized festivals a run for their money. Fan favourite Stormzy headlines, joining a number of artists of real talent; Flying Lotus, Mura Masa, Sampha, Loyle Carner and Tom Misch to name but a few.

Warehouse Project, the festival’s organisers, deserve massive credit for securing such stellar names year after year, and this year’s line up is no exception. Having been impressed by Parklife’s south-coast understudy, Wildlife, last summer, I have no doubt that its big brother will live up its ever-growing reputation.

Whilst weekend tickets are sold out, day tickets for Sunday 11th are still available here.