Last week Reading and Leeds festival was back for another weekend of the biggest and best bands and artists the world has to offer. I was able to get up and close with the main stage bands of Leeds’ Friday leg of the festival, and with some of the biggest attendance numbers of recent years, fans from all reaches of the music world hustled to the main stage to witness one of the best main stage line-ups of the festival’s history do what they all do best.

Opening the first leg of the festival was State Champs, a band used to being the support. Still, it’s easy to see why they are always the opener, with a fast-paced energy and a childlike keenness to please and involve their audience as much as possible, they were admirable to watch. If they finally score a headline tour, it’s similarly easy to imagine them catapulted up the pop-punk ladder with the jolt they seemingly deserve.

Up next, a band where time seemed to slow down as they played. The Virgin Marys blared their way through song after song, each sounding all too similar to the last, with its three members playing more to each other than their crowd – much like Coheed and Cambria who followed. Why they were given a slot on the main stage at all is a mystery to me. 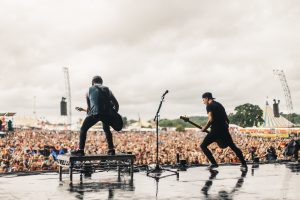 Sleeping With Sirens were the first really anticipated band of the day, and they did anything but disappoint. Opening with ‘We Like It Loud’, they provoked the first noticeable wave of excitement of the day in their crowd. After finishing ‘Do It Now Remember It Later’, frontman Kellin Quinn confessed his loss of voice, imploring the crowd to be the band’s frontman for the day and he the support. “I’m not a pussy, though, I’m not gonna not carry on just cos I’ve lost my voice. I’m here, we’re here, for you” he howled to the deafening roar of the crowd before swooping into their best song of the set, ‘Better Off Dead’. Finishing with ‘If You Can’t Hang’, rhythm guitarist Nick Martin collected his plectrums and gave them out personally to members of the crowd, thanking them as he did so. Honestly, the gratitude of some bands is something so refreshing, so jarringly appreciated in this day and age. Props to them.

Then came metal rockers Five Finger Death Punch who garnered an even heftier crowd and somehow proved themselves to be the nicest metal band on this earth. Frontman Ivan Moody offered a bizarre but completely welcomed abundance of thumbs up; he gave them to everything, after most songs, to every single crowd surfer, after every time he’d return to the stage after doing a bit of a Bruce Dickinson and changing outfits every two songs. But what was the kindest gesture of any band I’ve seen was Ivan’s insistence to stop a song in order to sign a sweatshirt a fan had thrown on stage, before giving it back personally to him. The music wasn’t great but they sure made up for it in pure gratitude and kindness. 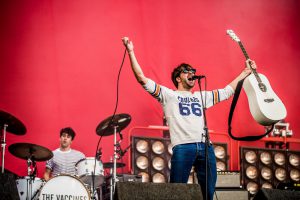 As rapper A$AP Rocky failed to show up due to ‘transport issues’, an hour and a half in the beating sun followed before being interrupted by a touching tribute to the late band Viola Beach, made up of a short speech by a BBC Radio 1 representative and a ten-minute video. Following this were The Vaccines, who delivered a surprisingly impressive set, made up of a number of their hits and several lesser knowns. Whilst ‘Wetsuit’, ‘Minimal Affection’ and ‘Handsome’ showcased the group’s infinite charisma and unending indie appeal, there was no beating crowd favourites ‘If You Wanna’ and ‘Norgaard’ which seemed to reflect the very energy and ardour the day had built up so far.

As Fall Out Boy’s set setup was finalised, and the hearts of fangirls and fanboys all over begun to quicken, dancers with fancy hair and dominatrix-type getups were spotted warming up at the sides of the stage. Fall Out Boy aren’t usually one to brandish stage gimmicks, let alone dancers, but as their intro video began and ‘The Phoenix’ took over, the dancers’ purpose became apparent. It seems fire and all things dangerous were the theme of FOB’s set – I was scared for frontman Patrick Stump’s life at one point. Newer hits like ‘American Beauty/American Psycho’ were mixed in with the older classics such as ‘This Ain’t A Scene’, along with several wild cards which nobody expected like ‘Hum Hallelujah’. This was one of the most heartfelt sets I’ve ever seen from Fall Out Boy, particularly the rendition of ‘Save Rock and Roll’ turned tribute to the late David Bowie. As the band ran off stage, the words ‘sometimes you have to crack a pavement before you can bloom’ appeared on screen. Cheesy, yes, but the boys are definitely teasing something here with this whole ‘bloom’ business… 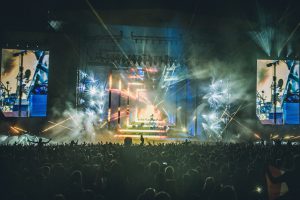 Finishing the day were the acclaimed boys of Scotland – Biffy Clyro. And what a show they put on. Under pressure from their 2013 headline slot, as the intro to ‘Wolves of Winter’ began it became clear that they had an abundance of complete and utter control. Interestingly, Biffy’s best songs weren’t the classics – ‘Mountains’, ‘Many of Horror’, etc – although amazing in their own right, but it was the newer, sparkly songs which stood out, particularly ‘Friends and Enemies’ and ‘Animal Style’. As frontman Simon Neil and bassist James Johnston sang/screamed to eachother during ‘57’, I’m sure it was then that the crowd unanimously decided that Biffy are one of the best live bands to grace this earth. Thank God for Biffy.

And as ‘Stingin’ Belle’ finished their set and the day’s antics, the crowd began to thin, either returning home with ringing ears or back to their tents to prepare for the second leg of the festival. Though, if I know anything, I know for sure that that second day couldn’t have even come close to the sheer brilliance of the first.