Read more
You are at:Home»Live»Festivals»Review: Saturday at Blissfields 2016
By Laura Cox on July 12, 2016 Festivals, Live

Although the long established saying about Blissfields (‘it never rains’) wasn’t true this year, Melanie and Paul Bliss, the festival’s organisers, hosted another fantastic weekend with a diverse range of artists including Dizzee Rascal and Everything Everything. The rain didn’t spoil the weekend; the carefree Blissfields spirit and excitement was tangible throughout the festival weekend. Here, I review the Saturday of the festival.

Spring King were a highlight of the Saturday of the festival. The four piece band, who hail from Manchester, have recently released their first album, Tell Me If You Like To. Their track ‘Summer’ was particularly popular with the crowd and is a must-listen; the sun even made an appearance for this track! Bigger crowds headed out to the Manor stage on Saturday than on Friday and the festival truly came into its own with the improvement of the weather.

In addition to Spring King, Blaenavon were another crowd favourite. The three piece band, who are originally from Liss in Hampshire, played Glastonbury this year and they look to be tipped for success this summer. Their energetic performance in The Den engaged the young crowd, who were more than happy to sing and dance along. 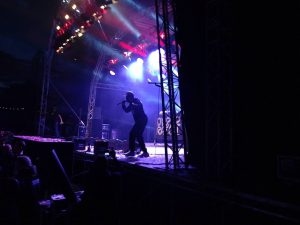 Dizzee Rascal headlined the Saturday of the festival, and his set was fantastic. The crowd danced and sang along to popular hits such as ‘Holiday’ and ‘Dance Wiv Me’ as well as earlier material, including 2003’s ‘Fix Up Look Sharp’ and ‘Just a Rascal’. Dizzee really engaged with the crowd and the ‘House Party’ theme of the festival was truly realised.

Although the music and atmosphere were fantastic, as a regular Blissfields-goer comes to expect, there were a few issues which could be ironed out to make next year’s festival even better. Blissfields offers the option of a paid ‘posh wash’ pass which offers access to cleaner toilet and shower facilities. However, this area wasn’t particularly well maintained this year – although it must be noted that this was also due to the condition of the fields as a result of the rainy weather. The Posh Wash pass didn’t seem worth the extra cost as so many people were using the facilities, resulting in lengthy queues. In addition, there didn’t seem to be as much variety in terms of food stalls this year. Several food vans ran out of stock on the Saturday evening, at the time when crowds headed out from the main stage to purchase dinner between acts. This isn’t the fault of Blissfields’ organisers, but could be avoided next year.

Overall, Blissfields 2016 was a weekend full of fun activities, great food and fantastic music, and I’m looking forward to the return of Blissfields next year! 2017