Andrew Garfield delights in a giddy -- and sobering -- look at one of musical theatre's greats.

“If I only ever get to make one movie, this is one I know I could feel proud of,” first-time director but certainly not first-time anything else Lin-Manuel Miranda summarises during a scene breakdown for Vanity Fair. This comes after twelve minutes of the Hamilton and In the Heights scribe lovingly pouring himself over the tiny details of tick, tick… BOOM!’s ‘Boho Days’ party scene; the sagging shelf, the musical alum cameos, the timing of the “lightbulb” line. “I think you’re gonna get to make at least one more movie”, laughs lead actor Andrew Garfield. I think he’s right.

The encylopaedic passion with which Lin rambles in this video is a microcosm of why tick, tick… BOOM! works so well. He’s talked at length about the ways Jonathan Larson’s work — Rent, too — has touched and inspired him. The affinity for the material is clear in speedy and inventively structured filmmaking; you would be forgiven for thinking that this was helmed by some wide-eyed newcomer. It’s all seriously elevated by an electric Andrew Garfield, studious as ever, who attacks his role with the same vigour with which Lin directs and pretty much carries the whole thing. If Spider-Man: No Way Home wasn’t looming, I would say that his portrayal of the late Jon is his most significant role in years. It’s easily one of the strongest performances of the 2021, making a character who could have been unlikeable in the hands of a lesser actor totally magnetic. I’ll be crossing my fingers for an Oscar nod; it would make Garfield the first Best Actor winner for a musical since 1964, fitting for a film that celebrates one of the medium’s greats. 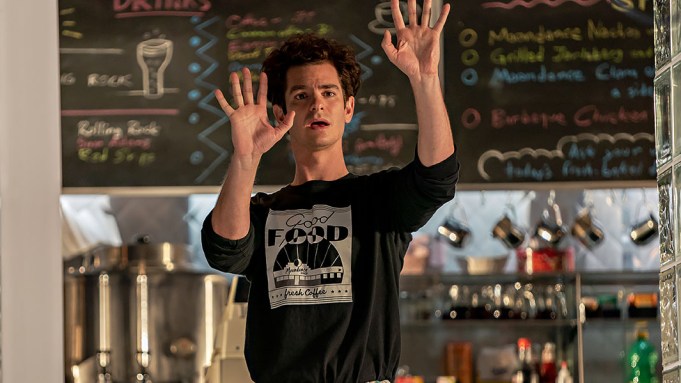 There isn’t necessarily a weak performance here; Joshua Henry’s vocal tone is like syrup, and Robin de Jesús puts in a great turn as Jon’s (mostly) BFF Michael. The musical numbers are stronger as a result, and there’s a nice ensemble feel despite Jon carrying a large bulk of the songs. The film is a surprising companion piece to October’s Dear Evan Hansen, whose flaccid choreography and editing ruin very good songwriting. Where Stephen Chbosky is quite happy just to film Ben Platt sing at static supporting characters (and maybe have him stand up or sit down a couple of times), Manuel-Miranda uses even tick, tick… BOOM!’s most pedestrian environments creatively. Whether this is Andrew Garfield dashing through a library towards a backtracking camera in the opening number and personal favourite ‘30/90’, or Jon visualising staves of sheet music in the kinetically edited ‘Swimming’, pretty much every song has some kind of cinematic flair that justifies adapting the musical to film in the first place. You could fill a book with its clever little moments; the ritz-to-subway match cut that concludes ‘No More’ is perhaps my favourite. It is air-punchingly good.

The film isn’t all hunky-dory, though. Some sequences are too stylish for their own good: ‘Come to Your Senses’ is stifled by gross oversaturated green screen, and the rhythmless ‘Sunday’ kills the film’s building narrative tension. Some of the songwriting is also a little patchy (the shelved ‘Green Green Dress’ should have taken the place of on-the-nose ‘Johnny Can’t Decide’ on the soundtrack) and Garfield’s vocals, though certainly serviceable, lack character and can land a little flat. I also wish there had been a few more piano-rock tunes in the style of the opener, as these bring out the best qualities of Larson’s songwriting, which I find stronger when earwormy than lyrically verbose.

Tick, tick… BOOM! is no doubt a definitive adaptation, though, directorally impressive and well-framed. It is emotionally potent, searingly well-led by Garfield and successfully celebrates Larson’s legacy as an unsung (or at least often forgotten) spearhead of musical theatre. Mainly, I can’t wait to see what Lin will direct next — as long as it isn’t Hamilton.

tick tick… BOOM! is available to watch on Netflix now. Watch the trailer below: