Venom's sequel is much of the same, for better or worse. Mostly for better.

Venom 2 is a strange film. I can actually hear the eyes rolling over this (there are so many rolling eyes that they became audible, yes) idea of a Marvel/Sony production being genuinely subversive, but it has to be said that Venom 2 really does go further than most comic book films have.

The cynic in me wants to look at a larger budget film like this and mourn over the downsides – the neutered violence, bound to only become worse with the post-credit sequence reveal, is a shame, and the brief runtime means that this film is often hopping from idea to idea before really allowing any of them to simmer.

Thankfully, often the abrupt endings to those ideas introduced in the film are at least used for self-aware gags which makes them less tiresome, and let’s all face it: we did not go to see Venom 2 expecting anything even remotely serious (making the clear nods to Christopher Nolan’s other-side-of-the-coin The Dark Knight an odd inclusion, though not as odd of an inclusion as a philosophical debate towards the end…).

We came for silliness – the amusing pairing of Tom Hardy’s Eddie Brock mentally fighting with his troublesome roommate Venom, who just happens to be an alien with an intense hunger for brains, Woody Harrelson speaking primarily in cryptic poetry and a wonderful CGI vs CGI battle to close things up. It brings me a lot of pleasure to say that in seeing Venom 2, you’ll get all of that in spades. Even if your buzz may be harmed by the post credit scene which you hopefully did at least stick around for. 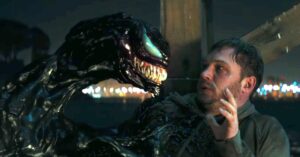 On the plus side, the new inclusions here are all fitting and make for greatness. Stephen Graham, who I was surprised to see involved at all and shocked to see actually playing a seminal part in the film as a whole, is typically great even if this isn’t the sort of role wherein he gets to shine as he usually does (we’ll have to wait for the upcoming Boiling Point for that, I’m afraid!), and both villains are very good in that campy tone that continues from this film’s predecessor.

There are plenty of smaller pleasures too. References to the underrated 1960s classic The Odd Couple are aplenty, Little Simz has a brief cameo (and her excellent song ‘Venom’ from her debut album is featured not once, but twice!) and this film actually dares to go further than the original did with the theme of self-acceptance, even having Venom give a speech about tolerance and acceptance at one point. It’s as strange as it sounds, but surprisingly cohesive.

Overall, Venom 2 is something of a mixed bag. It’s a film of intense highs and desperate lows. There’s a certain sadness to seeing actors as good as Michelle Williams, Tom Hardy and Stephen Graham playing roles that give them relatively little space to move that is never fully shaken off even if Hardy in particular gives this film everything he has, and as I said previously, the cinematic repercussions of that post credits scene actually did take away from the film for me, even though I’m sure it will excite a great majority. Fans of the first will get what they want in the appropriately sized serving – 90 minutes, funny fish-out-of-water gags, CGI bombast and a chuckle at the (second) oddly misguided Eminem track made for the series. It’s imperfect, but it could have been worse – I could have seen Dear Evan Hansen.

Venom: Let There Be Carnage is currently in U.K. cinemas. Watch the trailer below: