Read more
You are at:Home»Film»Cinema»Review: Sausage Party
By Carly-May Kavanagh on September 6, 2016 Cinema, Film
20%
20
Why did I pay to see this?

This film isn't funny, or so bad it's funny, It's just bad, too crude, and thinks that it's cleverer than it is.

It should be mentioned that my views on this film are definitely in the minority – it’s had rave reviews and is currently sitting pretty at 82% on Rotten Tomatoes. 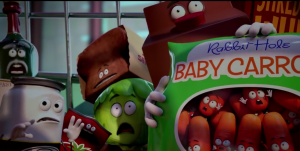 Sausage Party is set in a shop called Shopwell’s, where food items dream of being chosen by the Gods (humans) and going to ‘the great beyond’ (outside the sliding doors) where supposedly there’s nirvana. When a jar of honey mustard (Danny McBride) is returned to the shop, word spreads of what actually happens to food outside the doors. Paradise is where skins are peeled and baby carrots are eaten, and the food has been lied to in order to control it. They begin to question the lies and the meaning of existence.

And some parts were pretty funny. Like… the trailer. Just the trailer. Not really anything else. The faux-satirical jokes about the Isreali-Palestinian conflict with ‘the West Shelf’ and the Holocaust references (a sauerkraut wants to exterminate ‘the juice’) were more shocking or forced in than hilarious. The villain was a douchebag – literally – who drunkenly empties a juice box while talking about how if anyone asked this never happened? It’s just not funny. It’s trying so hard to be funnier and cleverer than it actually is and the amount of laughter in the full cinema was disappointing considering the decade that this film has been trying to get made for.

I know what you’re thinking, “of course it’s crude and inappropriate and not PC but it’s a SETH ROGEN film, what were you expecting?!” There are a lot of ugly racial stereotypes in the film but of course it’s just hot dogs and a gay Twinkie and a Native American firewater (and animated at that), so obviously it’s fine! Actually, no. If the firewater was played by an actual Native American actor or we had a black actor playing the grits insulting the ‘crackers’, that really wouldn’t be okay.

I thought there was no way a film in which Alan Menken had written a song could be bad. And like I said, it’s a popular film – it’s made nearly $90 million at the US box office so far. Maybe it was just the trailer that was funny. But for all of the jokes and the attempts at clever, deeper meanings the film tries to convey, it doesn’t really leave a lasting impression or have all that much to say.