Luke Scott's directorial debut results in a memorizing representation of the murky waters of abuse and human curiosity, posing some too-real questions about where our scientific curiosity is leading us.

In Alex Garland’s 2015 sci-fi hit Ex Machina, Nathan, one of the three central characters, remarks “one day the AIs are going to look back on us the same way we look at fossil skeletons on the plains of Africa. An upright ape living in dust with crude language and tools, all set for extinction.” Interestingly, he and Caleb, the film’s protagonist, spend a good chunk of the film looking on at the film’s AI, Ava, solely through a glass wall and through cameras – looking at her as a piece of remarkable technology and admiring a glittering consciousness of artificial design but also of extremely human potentialities. For that chunk of the film, such overt admiration imprisons them in a state of seeing her not as an evolution, as Nathan suggests, but as a discovery – a leap in scientific research. Nathan creates Ava before referring to himself as a ‘god’. With such power, artificial intelligence could never succeed their creators (but obviously they could, as I, Robot outlined all the way back in 2004), instead acting as a means of pushing human beings further to their own limits. Luke Scott’s Morgan trials a similar vein, keeping the artificial being in question in a confined box, more or less, for a hefty chunk of the film, begging the question of who really has the power, how human are our emotions anyway, and are we all just upright apes living in the dust our creations have left behind? Are we to become extinct at the hands of our curiosity?

Whilst following a similar vein, Morgan pales in comparison to Ex Machina, unfortunately. What probably showed up to its preliminary meetings and discussions as an insightful, unique premise results in what appears to be a shoddy retelling, reshaping of the premise of Ex Machina, the issue here being timing. Released before Ex Machina, or, equally, a few more years after, could have salvaged Morgan’s fifth star but sadly it stands hunched in the shadow of Garland’s film of only the previous year. Which is, really, a shame, as Morgan has a lot to say, and a lot of ways to say it. 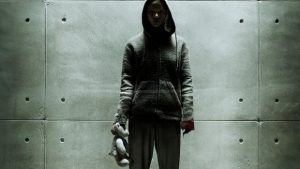 Morgan, tackling tricky issues of consciousness and being on top of even slipperier themes of morals and murder, gender and abuse, follows no-nonsense corporate trouble-shooter Lee Weathers as she is brought into a super secret science laboratory who are undertaking some super secret scientific research involving a certain synthetic being called Morgan, after ‘it’ throws a tiny little tantrum involving the gruesome stabbing of scientist Kathy in the eye – several times (considering the film’s focus on themes of sexuality and gender, Freud’s fixation on eye injuries being a symbol for the uncanny fear of male castration becomes something of a prominent, if not sickening, representation of gender issues here). Lee’s assigned job is to decide whether the ‘project’ must be terminated or not, whilst the scientists at the project’s facility are forced to face up to their respective feelings about the enigmatic Morgan, and their choice to protect her, or themselves.

What results is, independent of both preceding films and films to come of whatever similar likeness, is something idling on the edge of transfixing. Together, director Luke Scott (son of Ridley – face of Alien and The Martian) creates a stunning reflection of a truly scary world where a sparkling mixture of a manipulated evolutionary path and human capitalistic curiosity results in the scariest of conclusions – one of utter uncertainty. It’s a violent film, I’ll give you that, so be prepared for a lot of deaths, and a lot of ghastly ways of carrying them out. But not all of them are without reason (though those come in abundance too), and a lot of it hits home – hard.

Coming from an abusive past, so much of Morgan rang tantalisingly, almost unbearably true to me. Though my story is infinitely different to that of a synthesised human with superhuman qualities and some somewhat questionable, if not downright confused morals. Being strung all too close to the ever-feared ‘termination’ before (spoiler alert) making an impossible escape, and some even more impossible fatalities, the story of misplaced and manipulated trust and guilt and violence, violence for the sake of a relationship, that is so effortlessly intertwined into the plot is something that both relates to me and amazes me. Without taking an easy stance, without making Morgan the bad guy (the bad ‘it’, maybe? Gender is an unmistakeably prominent theme in Morgan), the easy, simplistic trope of perpetrator, and Amy, Morgan’s (romantic?) interest, the victim, Morgan reflects the always complex and often murky waters of power-relationships and abuse in an inspired and creative way. Morgan and Amy’s relationship can be substituted easily as a metaphor for any kind of abuse, emotional, physical, everything from a black eye to rape to a guilt-trip, and is one of the only mainstream sci-fi films of recent times to do so. Props to Scott. 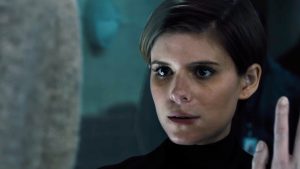 Another thing Morgan undertakes brilliantly is its portrayal of women. Not only do we have a totally badass female protagonist who doesn’t even come close to taking anyone’s shit and has a character-arc which doesn’t revolve around, centre on, or even include much of, any male character, but we are treated to a whole range of women, all with different arcs and different reactions to the story-events. We don’t just have the ‘necessary’ strong woman, included in many a recent film just to appear fresh-faced and libreral, but we have weaker women, women in power, women in charge, married women, single women, women of non-specified sexualities. We have scenes with just women in them; we have realistic and interesting interactions between women that don’t have a man standing in the conversation’s peripheral light. We have real women here, written well with dimension and impressive perception.

I can only hope that films to come will take note; Morgan seems to be part of a very sparse group of pioneers of the area. Whilst a tad too explicit and obvious in certain representations and symbols scattered throughout the film, Morgan does well to explore difficult themes in a creative and thrilling way. And with an ending I can only describe as a clever idea rushed to the point of losing intellect and substance, it remains only a scratch on an otherwise utterly impressive and transfixing film.