In being as strict and straight-laced as he is here, Michael Bay removes any of the real appeal his older work ever had, leaving his cinematic ineptness plain to see.

No matter what you think of Michael Bay, you have to somewhat admire the man. Despite delivering some of the 21st century’s most aggressively stupid releases, he’s also made some of its most successful ones too, and for every Transformers he’s unleashed on the world, there’s been a glimpse of something original not too far behind. They might not all be gold, but at least they’re very rarely boring. Well, until now, that is.

13 Hours (and its uncertain and positively pointless sub-title) tells the true story of a small, six-man security team deployed in Libya in 2012, following the fall of Gaddafi’s government. When the American Ambassador has his home attacked by local militia, the team scramble to his aid as their country’s last line of defence overseas, but the night gradually dissolves into all-out chaos as a series of explosive encounters leaves them battling for their lives.

It’s a classic American action tale, the sort Bay has been delivering for years. The only problem here though, is that the source material, a harrowing real-world stand-off, really doesn’t lend itself to Bay’s ultra-gimmicky style, meaning a lot of his standard hallmarks seem to fade away into the grittiness of the story. This isn’t really a film you can have fun with, and as a result, the usual gaping flaws which come with Bay’s general ineptness can’t really be forgiven, and stand bolder and more unmovable than ever.

Much like 13 Hours, Bay’s last original effort Pain & Gain was a total mess of ridiculous editing and poor narration, but the film was so trashy and upbeat, it simply slipped into being part of its charm. With a subject as serious as this however, there’s no where left to hide.

I never thought I’d say this but, I miss Mark Wahlberg. (Image via OCanada)

The most glaring mistakes Bay makes are in his editing. Never one for delivering short films, 13 Hours clocks in at a saggy 144 minutes, at least an hour of which is lost to a sloppy and painfully cluttered opening, which dives through so many unnecessary loopholes, it often feels frankly baffling. Instead of simply introducing his characters, riling up their chemistry and diving into the meat of the story, Bay flitters around with numerous, nonsensical Homeland-style missions which do nothing for the film’s plot other than take up vast amounts of time.

Had these sections been properly explained, there might well have been more to appreciate here, but in throwing his characters around manically with little more than the odd line of hurried exposition to tie it all together, Bay loses us, and fast. And here lies the film’s greatest issue of all: its impatience.

In cramming together so much unnecessary baggage, Bay ends up cutting back the moments that really matter, killing any real sense of tension before it gets a chance to develop. The battle sequences, although relatively well set-up, crumble under editing so frenetic, it becomes difficult to remember where each of the main players are, and as a result, they ultimately all start to blur into one. Wave after wave of faceless militia approach and are, as expected, mown down by American guns. The little variety that is thrown in, in the form of an insanely late but surprisingly well-shot mortar attack, disappears almost in an instant, with no real time to relish its dramatic weight. 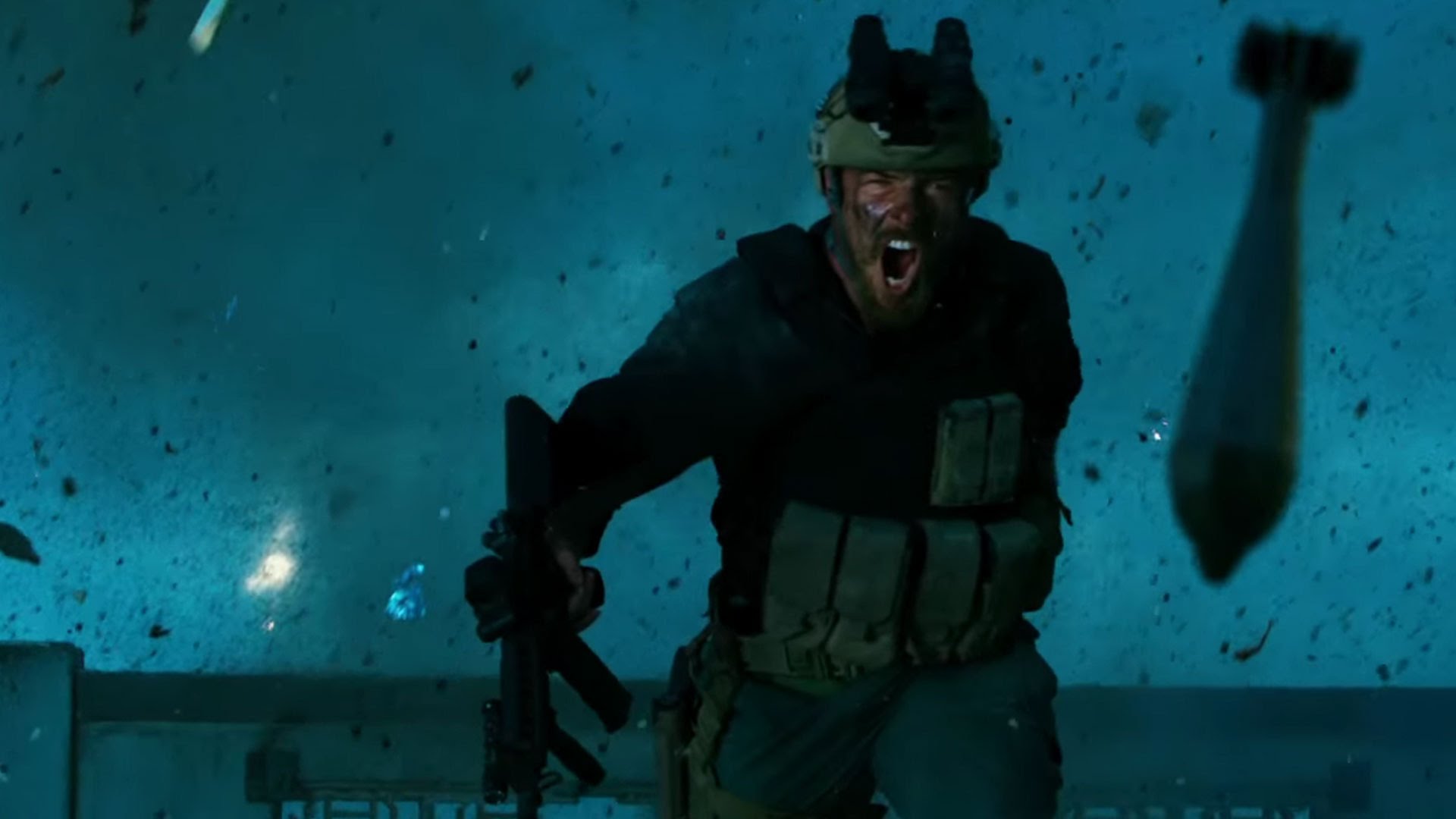 This almost extends to the cast too, who, although oddly kitted out with familiar faces like John Krasinski and Toby Stephens, find themselves all moulding together into some awkward blob of pulsating masculinity; a perpetually angry flash of beards and biceps. The few moments that they are given to shine towards the film’s end, the gang (Krasinski in particular) seize whole-heartedly, they just sadly come too few and far between.

13 Hours isn’t necessarily a terrible film. Fans of the Call of Duty era will likely salute its action, and its hamminess never quite reaches the uncomfortable levels of Bay’s previous war effort Pearl Harbour, but it does indisputably suffer from its director’s complete lack of tact. It’s the sort of film that expects to be taken deadly seriously, despite featuring scenes of grown men throwing tyres around in their underwear for precisely no reason. In another, more light-hearted film, you might find yourself laughing at how ridiculous that image is, but not here.

13 Hours is far too po-faced to get away with such things, and between this and its general ear for choppy editing, it’s all a bit of a faceless, and rather boring, mess. Michael Bay being sensible clearly doesn’t work after all; bring back the dancing robots.

13 Hours: The Secret Soldiers of Benghazi (2016), directed by Michael Bay, is released in the UK by Paramount Pictures. Certificate 15.