Read more
You are at:Home»Film»Cinema»Review: The Good Dinosaur
By Matt Clarson on November 30, 2015 Cinema, Film
60%
60
Good

Some of Pixar's latest film is fantastic, but the whole thing is let down by a lacklustre, disjointed story.

Being their second film of the year, Pixar’s The Good Dinosaur ticks many of the boxes we’ve come to expect from the studio – humour, emotion, childish fun, and boundary pushing animation. However, it fails to reach the same brilliant heights as the best that Pixar has to offer, most notably this summer’s Inside Out, held back by a less than ideal production, and a choppy, disjointed story.

The film follows Arlo, a young dinosaur in a world where his species were never made extinct by an asteroid strike, and have instead become the dominant intelligent life on the planet. We get to see how dinosaurs would farm, or herd livestock, use traps, and build rudimentary structures. All of this sets up the world with the kind of bright, unembellished intelligence that can be found in many of Pixar’s films – particularly A Bug’s Life and Monster’s Inc.

Arlo gets swept from his home by a river, and we get to see him struggle to make his way back. Along the way, he meets a wild human boy, who he names Spot. The two are initially at odds with one another, but as the film progresses, and their relationship develops, it quickly turns into what is almost a buddy-road-trip movie.

Though Arlo may be our protagonist, it is Spot who steals the show – he is incessantly adorable and the source of much of the film’s humour, action, and just all of it, really. Spot also gives Pixar the chance to employ one of their favourite techniques – creating emotion, character, and empathy without uttering a word, which is most apparent in what is hands down the best scene of the film (it involves sticks, drawing, and the holding back of man-tears).

The road-trip-ness of the film also lets Pixar show-off its most impressive aspect; its visuals. The Good Dinosaur is the most spectacularly gorgeous film Pixar have made to date, its landscapes drawn with breath-taking depth and realism. Watching this film makes you really kinda want Pixar to make an animated nature-documentary or something. That being said, the quality of the visuals may actually detract from the film for some viewers, or, rather, the juxtaposition of the hyper-realistic landscapes with quite cartoonish characters. 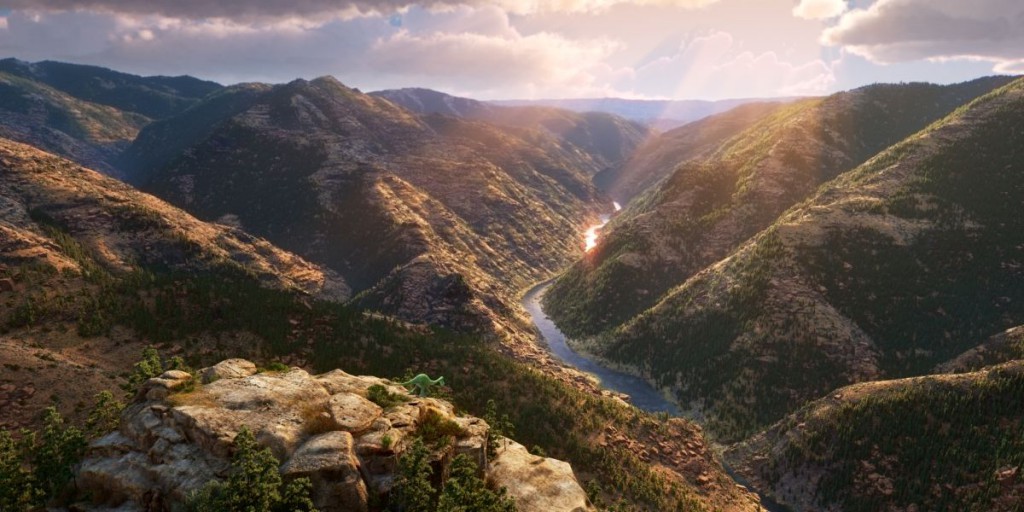 This is not real. This is animated. Look at it. Look at how beautiful it is. Photograph: Disney

As good as Spot is, and as superb as the film may look, however, The Good Dinosaur is a far cry from Pixar’s best. This may be in part because it’s made by a fairly junior team – director Peter Sohn has only directed a Pixar short before now (Partly Cloudy), and Bob Peterson (story) and Meg LeFauve (screenplay), though both having worked on films like Up, were never the driving forces behind those films (that would be Pete Docter).

It may also be because of the film’s widely reported production difficulties, which saw Pixar scrap much of the film last year, re-doing much of it for this year’s release. Whatever the reason, the result is a lacklustre story, one that feels lazy coming from Pixar – the plot is almost just Finding Nemo with dinosaurs – and one that feels disjointed, like various scenes were stitched to together without much thought for the overall narrative cohesion of the film.

Still, The Good Dinosaur is definitely a good film, though it’s hard not wonder what it might have been had it been done properly. It looks fantastic, it is never boring, and every now and then a scene that is particularly excellent provides you with the happy reminder that you are still watching a Pixar film.

The Good Dinosaur (2015), directed by Peter Sohn, is distributed in the UK by Walt Disney Studios Motion Pictures. Certificate PG.