Read more
You are at:Home»Film»Archive & Comment»The Sea Beast is more than a How to Train Your Dragon-styled pirate film
By Laura Carpenter on July 26, 2022 Archive & Comment, Cartoons, Cinema, Features, Film

The Sea Beast is a must-sea for any fan of good animation!

The Sea Beast (2022) is Netflix’s latest animated film, and the fourth directorial effort from Chris Williams, following his work on Bolt, Big Hero 6, and co-directing Moana. The film, co-written with Nell Benjamin, feels like a spiritual successor to Williams’ Moana due to the stunning seafaring setting, clever emphasis on exploration, and yet another purple crab monster. However, whilst Williams does revisit familiar territory, he refashions The Sea Beast in a way that harkens back to classic swashbucklers and seafaring stories, ergo resulting in a fantastic, animated feature that is on par with the dedication towards creating a liveable and believable fantasy backdrop, akin to the likes of artistic powerhouses – Laika Studios and Studio Ghibli.

The casting for the voice actors was superb, with selections such as Jacob Holland (Karl Urban) and Maisie Brumble (Zaris-Angel Hator), who are both a joy to watch with Urban’s (Butcher in The Boys) vocal performance as a charmingly rugged hero and the embodiment of sunshine, sass and sensitivity that is Zaris-Angel’s performance. Zaris-Angel has done an incredible job in her debut starring role with a solid and convincing performance which has sold me on her talents, and I look forward to seeing more of her in the future.

Beyond the incredible casting choices which bring realism and depth to the characters – and the terrific attention to detail such as keeping the seawater as realistic as possible (in turn highlighting the terror of the sea as a setting which amplifies how fear there would be in this world) – the film never tries to thrust contemporary dialogue or modern pop culture references (beyond a single, subtle nod to Xenomorphs during a dialogue exchange). Instead, the dialogue is tailored to complement the setting. As such, the focus on creating witty and, sometimes, powerful dialogue adds to The Sea Beast’s trait of treating their primary child audiences as intelligent beings rather than simply as a target audience to market toys at.

Some viewers may find the build-up of the film too slow for their tastes, but I would wholeheartedly defend the director’s choice; this isn’t really time wasted as it gives us an in-depth introduction to the literal crew of characters and a masterclass on worldbuilding by showing us the world of The Sea Beast. Unlike How to Train Your Dragon, which this film has been frequently compared to, due to their similar monster designs being made cute and marketable with big, round eyes as well as regular plots revolving around how deeply prejudice is rooted in society against things that are “scary and monstrous”. This progresses throughout the films to the dismantling of these social structures, and the people causing the wave of change are those who are labelled or considered to be outcasts. However, The Sea Beast is so much more than a pirate-themed How to Train Your Dragon. 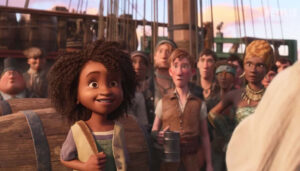 In one of the first scenes, we are introduced to a literal crew of characters with exciting character designs that showcase a variety of representations without feeling tokenised or, like in How to Train Your Dragon, the representation only exists to fulfil a joke. The Sea Beast, within another scene, makes a mockery of character designers who, in years past, have claimed that to create characters who divert from the Hollywood stereotype of the white, traditionally attractive (primarily male) person is ‘too difficult. Among the incredibly diverse background characters, The Sea Beast gives us characters in the main cast, including  Sarah Sharpe (Marianne Jean-Baptiste), the black, middle-aged, disabled female first-mate. It’s scarce in a film that a woman is allowed to be in power without being sexualised; even in a children’s movie, like Captain Amelia from Treasure Planet; her disability or cultural background as a woman of colour is never deployed as a joke in the film either. The representation is so integral to the character design without resulting in the character’s difference that the animators included even seemingly minor details like Maisie’s palms being of a different colour than the back of her hand. These may not be important for everyone, but for the many audiences who will identify with these characters, they may feel the same rush and joy that I felt when I saw my culture being represented in mainstream films like The Book of Life, Coco, and Encanto and be excited that representation and character design is always constantly improving and becoming more inclusive.

The Sea Beast is a visually-stunning adventure masterpiece with a variety of diverse character designs, interesting character dynamics, and incredible writing which displays both a mature understanding (of) and respect for the audiences’ intelligence. If you haven’t seen it yet, you’re missing out, so head over to Netflix. Now!