A former marine, choirboy and self-described “misfit”, Adam Driver has become a household name since landing the role of villainous Kylo Ren in the long-awaited return to the big screen of the Star Wars franchise. In anticipation of the next instalment, The Edge takes a look back at his varied career, from performing in off-Broadway theatre to his sudden launch into global fame.

At 33, Driver has already accumulated an impressive resumé, especially considering he didn’t make his feature film debut until 2011’s J. Edgar. Brought up in Indiana, he ran a fight club at school after being inspired by the movie of the same name. An initial attempt to get into drama school was unsuccessful, and then the events of 9/11 sparked a feeling of patriotism that led him to decide to join the U.S. Marines. After injury led him to be discharged on medical grounds, he gave drama school a second run and found himself with a place at the prestigious Juilliard, graduating in 2009. 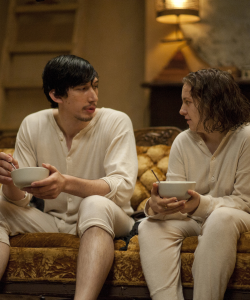 In 2012, after acting in several off-Broadway shows and supporting parts in both TV and film (J. Edgar, Law & Order, You Don’t Know Jack), Adam Driver landed his breakthrough role in Lena Dunham’s Girls. He played the wonderfully weird, slightly socially inept, but ultimately lovable Adam Sackler, the love interest of Hannah Horvath (Lena Dunham). Throughout the show’s six-season run, aspiring actor Adam exhibited an impressive trajectory of character development. When we meet him in season one, he’s admittedly unlikeable, playing with Hannah’s emotions and refusing to commit to a proper relationship. By the end of the season, she manages to tie him down, and he slowly morphs into an affectionate, if not slightly clingy boyfriend figure. Unsurprisingly this doesn’t last and they launch into an on-off scenario, dealing with cheating, mental health breakdowns, and being long distance for a time. Adam Driver is exceptional at portraying his character’s emotional complexity, helping us to understand the impact of the serious issues he deals with, and why he might not always act in the most endearing manner.

As well as starring in Girls, from 2012 to 2015 Driver also appeared on the big screen in a number of films. Several of these were directed by famous names, such as Steven Spielberg’s Lincoln in 2012 and the Coen Brothers’ Inside Llewyn Davis in 2013. 2014 saw him win the Volpi Cup for Best Actor at the 71st Venice International Film Festival for his role in Hungry Hearts as Jude, a father desperately trying to protect his child from its mother’s alternative and ultimately dangerous parenting techniques. In 2015’s While We’re Young, Driver teams up with Amanda Seyfried, the two of them playing a hipster young couple who befriend older husband and wife Ben Stiller and Naomi Watts, drawing them away from their boring friends with kids into a more exciting lifestyle. 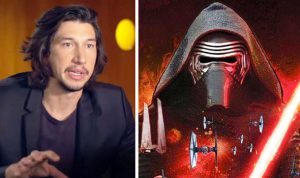 Star Wars: The Force Awakens exploded into cinemas around the world in December 2015, breaking box office records and inspiring a new generation of the Star Wars fandom whilst thrilling the old one. It saw Adam Driver playing his biggest role to date, earning him global recognition as resident bad-guy Kylo Ren, the grandson of Darth Vader. Considering he’s hidden behind a mask for the majority of the movie, it is even more impressive how he manages to convey a tangible sense of boiling rage simmering beneath a forced calmness, periodically exploding into fits of violence and anger. He makes Ren into the kind of villain that you love to hate, a sort of bad boy that you wish you could tame from the grip of the dark side. 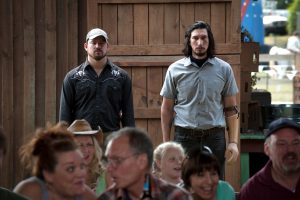 Driver has maintained a hectic schedule over the past two years, juggling Star Wars commitments with numerous other films, most notably Martin Scorsese’s Silence and the title role in Paterson, both in 2016. Earlier this year he starred as one-armed Clyde alongside Channing Tatum and a unrecognisable Daniel Craig in heist-comedy Logan Lucky, which sees the Logan brothers (Tatum and Driver) attempt to rob the Charlotte Motor Speedway. He also continues to work with his self-founded charity, Arts in the Armed Forces, which provides theatre-based entertainment to the armed forces for their enjoyment and emotional benefit.

Adam Driver has planted himself firmly in the spotlight, and with the return of Kylo Ren being hotly anticipated in the December 2017 release of Star Wars: The Last Jedi, it seems that he isn’t going away anytime soon. His prominence in such a legendary franchise has all but ensured him eternal global fame and recognition, and with his proven ability to turn his hand to diverse roles, I predict that we’ll see him in many more blockbuster hits in the future.

Star Wars: The Last Jedi will be released in UK cinemas on December 14th.