Oh, you beautiful, wonderful, ball of sunshine, you.

The film industry, much like the rest of the world, seems to be becoming more and more messy and dark day by day. Masses of egos wage war against each other and people are constantly determined to be right, and as I recently said in an article, celebrities have a tendency to ‘other’ themselves as much as we ‘other’ them. However, it seems that somehow, amongst all of this culture, you seem to keep your integrity. I admire you endlessly for this.

Growing up in Peckham, London, and a relatively rough area at that, you have shown the real progress you can make purely from hard work and dedication. You grew up in an area that was rife with drug abuse, gun crime and violence, yet you kept your head down, and got on with your education to achieve your dreams. A friend/neighbour of yours once said, “You would never see John on the street or hanging around gangs though. I only saw him in church or in acting school.” This is something that sounds similar to my childhood, albeit my acting school was instead my secondary school music room. I think this just makes you seem so real- an ordinary guy you can grab a pint with, or a guy you could bring home to your parents (My mum said she’d approve of you), and I think that is one of the many reasons you are so likeable. As well as this, you are never afraid to talk about your childhood, and you’re proud of where you come from. The fact that you never forget your roots is so important, and I think that it makes you a more humble person. You still seem to have a wonderful relationship with your family and friends from back home, even if you didn’t become a pastor like your dad wanted you to, and that’s a sure sign that you haven’t let fame change you. 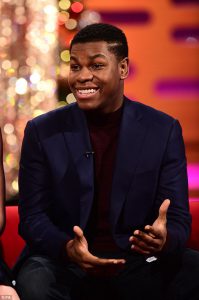 Another thing that shows your humble nature, is the fact that you never try to hide the fact that you weren’t just handed these roles. As you have said in more than one interview, a lot of people simplify your career into Attack the Block then Star Wars, but it wasn’t that simple for you. In fact, there were four years between those films that saw you face a lot of rejection. The fact that you kept your head up through all of this, and the fact that you perservered, is a testament to your steel will and determination. As well as this, you still seem to completely and utterly love what you do, you do it incredibly well by the way, and you’re just enjoying every moment.

You’re not afraid to freak out and be a fan like the rest of us too, which is nice. The viral video of your reaction to the Star Wars trailer is probably one of my favourite videos on the internet, and every time I rediscover it or re-watch it, I cannot help but smile so much that my face hurts. Also, you asked the original Star Wars cast, including your best friend Harrison Ford, to sign your action figures for you, which is incredibly sweet, even if it is slightly dorky and unprofessional! Speaking of Harrison Ford, your relationship with him is pretty awesome; it seems that you have a bit of love/hate banter going on, but you can tell that underneath that, you really love and respect him as an actor and person, and from interviews with him, it would seem that he feels the same about you. If you have Harrison Ford’s approval, surely that’s enough to show anyone that you’re worth liking. In regards to other relationships you have with other cast members, I’m still not over the fact that you call Daisy Ridley ‘Peanut’. It is quite frankly, adorable, and I hope that you continue to do it for the rest of both of your lives. You also have FaceTime conversations with your cat (which has an amazingly wonderful Nigerian name)- that’s just great. 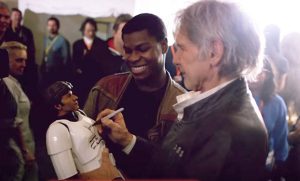 You also use your voice to speak out against issues in the industry, such as your response to the racist backlash of your casting in The Force Awakens. I’m sorry that those people couldn’t appreciate you, but as you’ve said, you’re proud of your beautiful chocolate skin, and if the racists were really going to be an issue, then the film wouldn’t have done so well at the box office… I’m so glad that you’ve been invited to join The Academy too, and I really hope that you are given the opportunity to use your voice for good. You clearly use your talents to bring joy, with your trip to a children’s hospital earlier this year also showing the ways in which you care.

At the end of the day, you are a young man doing a job that you are passionate about and you are just loving life. Your enthusiasm and love for what you do radiates out of you, and it creates such an encouraging and positive presence in the industry. You stand firm to your beliefs and openly discuss the things that matter to you, and I think that is using your platform in a positive way. As a young Christian in an increasingly secular world who wants to go in to a business that tends to denounce religion and faith, somebody like you is a massive encouragement. You’re an inspiration to many young people as you show the power of determination, working hard and never giving up on your dreams. You’re a great role model, and you just seem like such a wonderful guy. I’ve never met you, but the genuine authenticity you emit leads to believe that you would be very easy to talk to, and accommodating to pretty much everyone you’d meet. Please keep being you, and continue to stay positive in the increasingly negative and difficult industry. You rock.