Read more
You are at:Home»Film»In Defence of: The Amazing Spider-man 2
By Harry Geeves on December 15, 2021 Film

It feels a little like a pipe dream that the standard for superhero films was once not cinematic universes, nor indeed multiverses (is nothing sacred?), and it feels even more like a pipe dream that The Amazing Spider-Man 2, a film I once thought of as a car crash, could make me nostalgic for this. But the big lumpy mess of blue lightning that is Marc Webb’s sequel was not only a refreshing blast from the past on rewatch, it was also shockingly (sorry) enjoyable on its own merits. I will try, probably on deaf ears, to make a case for its quality. 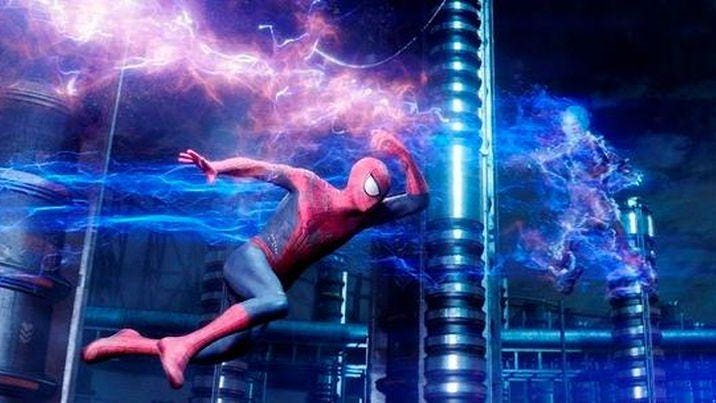 We should get the glaring stuff out of the way. Dane DeHaan is horrendous. The father subplot is rubbish. Paul Giamatti is… European? The structure of the film is held together with string and paperclips, setting up Jamie Foxx’s Electro as the main antagonist only to sideline him while Peter messes about with a calculator and an awfully written Harry Osborn for, like, a full hour. If there’s anything that defines the film’s problems, it’s its structural misjudgements and poor juggling of characters. It’s about the mid-point where cracks definitively appear in the film; Green Goblin is created over a bizarre tiff concerning Spider-Man’s blood (this entire plot point is ridiculous) and Electro transcends into pure energy or something. Some tweaking could and should have been done.

But there is also a lot to praise about The Amazing Spider-Man 2 (an absolute credibility-killer of a sentence). If it weren’t such played-out phraseology you could say it felt like a comic book, maybe most so out of all the live-action interpretations of the character. Colourful grading and delightfully wacky moments — Spider-Man donning a fireman’s helmet while he hoses Electro is a favourite — do wonders for a sense of fun. The introduction of the Osborns even features green-tinted lighting and costumes, reminiscent of Shyamalan’s use of purple in Unbreakable and adding a charming sense of visual coding. The action is also a feast: the Times Square sequence is eye-popping and Electro’s lightning against neon lights holds up as absolutely clean — I might be the only one on the planet who doesn’t hate the character’s blue re-design. Spider-Man’s web-swinging is also the best it’s ever looked, with the suit rippling as though real (a wicked attention to detail during the opening sequence) and the character shaking with momentum as he arcs his movement. It’s all a lot of fun to watch.

However, none of this would be so convincing without Andrew Garfield. With later, more weighty roles like Desmond Doss and Sebastião Rodrigues fresher in the mind, it’s easy to forget how watchable he is simply as a quippy leading man. His Peter Parker is not nearly as angsty nor annoying as in 2012’s forerunner and his Spider-Man is even more wisecracking and energetic (save for the odd line – “Sparkles” is not good). Peter’s relationship with Gwen is also rammed with chemistry, helped by Garfield and Stone’s dating status at the time, and makes for a really engaging dynamic. Gwen’s death is touching as a result — I love the visual effect which turns Peter’s web into an outstretched hand — and it feels as though the film actually follows through its constant warnings that the two being together is dangerous. It’s a shame that Dane DeHaan’s revolting makeup work is entwined with the claustrophobic finale.

It’s not a perfect film by any means, but if Spider-Man 3 can get its redemption as it has, and films like the tedious Zack Snyder’s Justice League can have respected camps of apologists, I think The Amazing Spider-Man 2 deserves a bit of re-evaluation. It’s a shame we never got a full trilogy to see out the finale’s Sinister Six tease — at least until No Way Home.

The Amazing Spider-man 2 is available to watch on Netflix and to buy on Blu-ray and DVD. Watch the trailer below: