Read more
You are at:Home»Film»Features»On Edge: Anticipating No Time to Die
By Christian Wise on September 16, 2021 Features, Film

Daniel Craig will make his fifth and final appearance as James Bond in the upcoming No Time to Die. While it will be sad to say goodbye to this version of 007, it’s fair to say that he’ll be going out with a bang. Craig has always been one of the best parts of the recent Bond films, even managing to elevate the more substandard material that he has been given at times. In No Time to Die, he looks set to give yet another strong performance, with the trailer showcasing the character’s trademark restrained anger while still giving him a few light-hearted moments and quips – perhaps courtesy of co-writer Phoebe Waller-Bridge.

Waller-Bridge’s involvement is a cause for celebration, given that she is the first credited female writer on a Bond movie since From Russia with Love. This may potentially give No Time to Die a somewhat fresh feel and voice compared to many of its predecessors. Her experience as showrunner on Killing Eve should mean that she feels right at home in the spy genre. Meanwhile, director Cary Fukunaga seems to be bringing the same moody, crisp-looking aesthetic that he brought to Netflix sci-fi drama Maniac. It will be interesting to see how Fukunaga approaches the action scenes but, based on the glimpses we’ve seen, it looks like No Time to Die will have some very impressive set pieces. 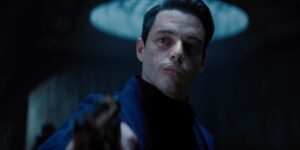 There’s more new talent in front of the camera as well, with 00 agent Nomi (Captain Marvel‘s Lashana Lynch) being the most notable addition to the cast. Nomi should add buckets of fun to the mix due to looking both charming and badass, and is set to have a challenging partnership with Bond. Also making their franchise debut is Ana de Armas, who will be playing the CIA agent Paloma. Given that she has only recently worked with Craig on mystery-thriller Knives Out, de Armas will undoubtedly have great onscreen chemistry with Bond. Not much is known about the new villain Safin, but Oscar-winner Rami Malek seems to be bringing a sense of soft-spoken menace that evokes memories of classic villains like Dr. No. Add in returning cast members Ralph Fiennes, Naomie Harris, Ben Whishaw and Jeffrey Wright (reprising the role of Felix Leiter for the first time since Quantum of Solace) and it looks like we have one of the best casts for a Bond film in years.

The music for Bond films in the past has been composed by the likes of John Barry, Marvin Hamlisch, Bill Conti, and Thomas Newman. Now the reins go to Hans Zimmer, who is no stranger to the genre having worked on the Mission: Impossible franchise and the 007-inspired Inception. Furthermore, Billie Eilish has made headlines through becoming the youngest person to ever perform an opening theme to a Bond film with a moody but slick song (also called ‘No Time to Die’). How Zimmer incorporates her work into the film’s score is a riveting prospect.

All signs seem to point towards No Time to Die being a fun, action-packed and satisfying conclusion to Daniel Craig’s tenure as James Bond. There has been some ups and downs over the last decade and a half, but with a fantastic cast, the top talent behind the camera and some big set pieces, Craig’s farewell looks like it’ll be another great adventure.

No Time to Die, directed by Cary Joji Fukunaga, will be released in the UK via Universal Pictures on 30th September. Watch the trailer below: