Read more
You are at:Home»Film»Features»Hidden Gem: Tomorrow Never Dies
By Christian Wise on May 9, 2020 Features, Film

Pierce Brosnan’s second Bond film is one of the most overlooked instalments in the series. Following up on his highly beloved debut in GoldenEye, Tomorrow Never Dies seems to be frequently dismissed as nothing more than a fun, throwaway actioner that has very little to offer. On the contrary, this film has aged significantly better than its peers and deserves a lot more attention and praise. 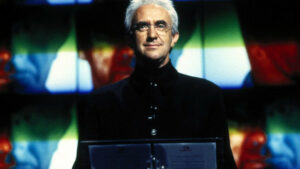 The film’s plot revolves around Elliot Carver, a powerful media mogul with a plan to start a massive war between the UK and China, creating an environment of panic and hysteria in order to sell more newspapers and ultimately gain cable rights in China. The idea of the media having that level of power and control over the masses may have seemed laughable back in 1997, but, with the rise of social media and increased prevalence of “fake news”, Carver’s tactics feel remarkably prescient in regard to modern media scaremongering. One only needs to take a look at the coverage of the ongoing coronavirus pandemic to see this in full effect. Given how many Bonds have ended up looking outdated due to shifting societal values, it is refreshing to see Tomorrow Never Dies carry a message that stands the test of time. 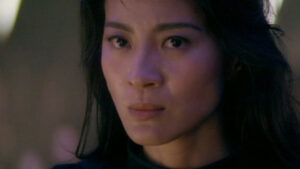 Of course, the film’s continuing relevance isn’t the only reason why it deserves more attention. Carver himself is a brilliant villain, with charisma and clear motivation, brought to life by a deliciously hammy performance from Jonathan Pryce. Brosnan likewise is fantastic, switching effortlessly between the different emotions of the character: from cheerful, Roger Moore-esque cheekiness to cold, calculating ruthlessness, as well as a quieter, more introspective attitude. Both the Bond girls featured are great. Carver’s wife Paris (Teri Hatcher) does a good job of showing the damaging effect that Bond’s callous womanising has on the women he leaves behind. Paris’ interactions with James are alternately fun and brutally honest. Michelle Yeoh as Wai Lin is a true badass, one of the very few Bond girls that actually lives up to the claim of being his equal. She is cool and funny, with her very competitive relationship with Bond providing a lot of humour 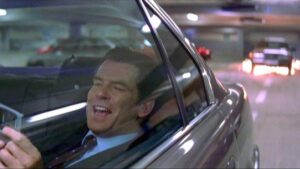 Tomorrow Never Dies is genuinely funny across the board. While GoldenEye is great, its script isn’t exactly one of its strongest points. By contrast, Tomorrow Never Dies features countless memorable lines, post-kill send-offs (“they’ll print anything these days”, Bond remarks after throwing a henchman into a printing press) and clever innuendoes. The action is slick, with a chase through a car park being a particular highlight, and there’s a robust apology for the lack of gadget action in its predecessor. The soundtrack, the first to be composed for Bond by David Arnold, is superb, mixing the traditional Bond sounds of John Barry with contemporary electronic music. I have a soft spot for Sheryl Crow’s opening theme, although it is nothing compared to k.d. lang’s closing song ‘Surrender’.

Tomorrow Never Dies is by no means a perfect film. It suffers from formulaic box-checking at times, and does degenerate into a fairly generic shoot-’em-up during the climax. That being said, it has a fantastic cast, great action, and a phenomenal villain. Largely as a result of that villain, the film carries a message that felt hammy and ridiculous at the time, but continues to grow more relevant with each passing day.

Watch the trailer for Tomorrow Never Dies below: