Read more
You are at:Home»Film»University of Southampton Student Film Festival 2017: The Final Round Up
By Sophie Trenear on March 31, 2017 Film

On Thursday 23rd of March, the 2nd annual University of Southampton Student Film Festival rolled out its red carpet, threw open the doors to Union Films, and saw a whopping sixteen stunning short films unveiled on the big screen. There were suits, there were heels, there was a lot of free prosecco, but the class didn’t just swarm over the 200 plus guests in attendance; there was plenty to marvel at over the two hours worth of student filmmaking, shortlisted from an impressive twenty-nine entries. Put together originally by former Wessex Films President Pippa Short and former Film Editor of The Edge Ben Robins, this year saw the event put together by a 13-membered committee, headed by founder Pippa Short and current Film Editor of The Edge, Hollie Geraghty, and it was bigger and better than they’d ever imagined. In fact, the whole night was pretty remarkable.

We had the ponderous apocalyptic drama of Karim Shabankareh’s Fighting Chance, and the sci-fi retelling of Aladdin with Iman Bahmanabadi’s A-1, as well as the A.I infected Safe Zone, a thriller by the night’s very own ‘Best Dressed’ winner, Red O’Sullivan (also won by our very own Deputy Editor Ashleigh Millman). We also saw the strikingly symbolic Blind Love, headed by Tom Pethick, and hilariously inventive stop-motion From Russia With Murder. Wasa Sitali’s comedy The Good, The Bad, and The Awkward made us chuckle with its retelling of every humanities student’s trek to Avenue campus, whilst Julien Mathus’ An Infinite Jest tested the limits of one child’s battle with early onset existential crises.

But if that doesn’t float your boat, fear not, because Georgina Morgan’s chirpy music video Turn It Of’ might do just that, or maybe an in-depth documentary about sexual consent at university takes your fancy. You’re in luck, as David Williams’ Undercurrent: Sexual Consent proves to be an interesting, not to mention extremely relevant, take on the matter. Emily Llewlyn’s profound drama Nora stunned audiences with its fantastic production design, whilst Liam Beazley’s insightful Concrete Paradise left some significant food for thought in its wake, and action-thriller Statera showcased Karim Shabankareh and Pippa Short’s knack for edge-of-your-seat excitement. And still, there’s more, with a unique look at friendship in Letting Go, the dark-comedy promo-video of Brian, or even the discussion of humanity and freedom in EVE and the warmth of Leo Barton’s Fortune Cookie. Whatever your tastes, the University of Southampton’s Student Film Festival 2017 was the place to be to celebrate them, and to be completely dazzled by the sheer talent this university has to offer.

After leaving the cinema astonished, it was time to indulge in more prosseco, the prop-littered photobooth, and, of course, the hotly anticipated voting of the audience award, whilst the judges made their verdicts inside. Ten awards were given to the best of the best, decided by our very own Film Festival Head of Operations and The Edge’s Film Editor Hollie Geraghty, Co-founder and Film graduate Ben Robins, Head of the university’s film department Lucy Mazdon, and film lecturers Corey Schultz, Beth Carroll, Michael Williams and Louis Bayman, and here they are, in all their newfound glory:

Best Sound: Won by Iman Bahmanabadi and Andreea Bianca for A-1. The film, a clever retelling of the classic Aladdin tale with a sci-fi spin, relies somewhat on its sound effects and design, above all brandishing a pretty nifty robotic voice for G-3-N-1-3 (see what they did there?) which helped the pair take home a highly deserved award for their efforts.

Runner up: Julien Mathus and Iman Bahmanabadi for Fortune Cookie

Best Music: Won by Bethany Stenning for Nora. Opening the night, Nora wowed audiences in various outstanding elements, but fighting its way to the top was its unique score that seemed to trace the troubled path of its eponymous lead-character and illuminate her inner psyche. Both playful and eerie, Stenning proved worthy of her win on the night.

Best Editing: Won by Iman Bahmanabadi and Leo Barton for The Good, The Bad, and The Awkward. Once again bringing

The Good, The Bad, and The Awkward, dir. Wasa Sitali

together the dream-team who dominated last year’s festival, Bahmanabadi and Barton’s work on Wasa Sitali’s comedy was highly commendable. A Western-film parody about the cyclist-scattered trek to Avenue campus, the effort spent on its editing makes itself apparent rather soon into its four-minute run-time. Progressions from the relaxed, anticipating long-takes to the snappy, rampant cuts between student and cyclist serve only to elevate the already admirable film, and add to its comedic effect.

Runner up: Penn-Lea Lim for Brian

Best cinematography: Won by Leo Barton for Fortune Cookie. This year’s festival saw an impressive number of films sat snugly in the realm of the overtly cinematographically adept, but it seems there’s no beating the reigning champion. Marking Barton as two-year Best Cinematography titleholder, his efforts in Fortune Cookie show the best of his abilities. Demonstrating an expert use of focus, lighting and shot framing, Fortune Cookie’s palette compliments the film’s tone and story which follows three different people in their own times of tribulation, connected by one tiny fortune cookie. It’s all very relevant and relatable, and the judges seemed to think so too – see below, where it wins, like, every award.

Best Actress: Won by Flora Whitmarsh in Fortune Cookie. Fortune Cookie brandishes a cast number that could rival even the most intimidating of Hollywood casts, fulfilling its fragmented structure without creating those tempting two-dimensional characters. To do that in just over 11 minutes is pretty darn impressive. But even more impressive is Flora Whitmarsh’s effort in winning the award for Best Actress, despite hailing only a supporting role, which just goes to show the talent she’s got bubbling under the surface. Having starred in Barton and Bahmanabadi’s winning effort last year, Cycle, this year she revels as Nicki, the friend-to-the-end of Alice, who offers her the highly coveted fortune cookie that’s suddenly oh-so popular.

Runner up: Pippa Short for Brian

Best Actor: Won by Benedict Evans in From Russia With Murder. Perhaps the most inventive film of the night, this stop-motion detective noir “with the bits left in” might just be the next Monty Python, and Evans’ part as Blackitt McFoolio might just be one of the leading forces to bring that to realization. The film follows two police detectives as they try their very hardest to figure out who or what has chopped up someone and sent the dismembered remains to the police in a cardboard box, and it’s as fantastically obscure as you think.

Best Screenplay: Won by Julien Mathus for An Infinite Jest. A wholeheartedly well-constructed film, An Infinite Jest surrounds the depth of existentialism of one child who refuses to do his homework. It’s funny, it’s witty, it’s impressively well-written, and absolutely deserving of taking home the award for Best Screenplay. Plus Mathus’ acceptance speech was one of the most humbling of the night – so that’s nice.

Best Director: Won by Liam Beazley for Concrete Paradise. A raw comment on the refugee crisis, among that of war, hunger and societal alienation, Concrete Paradise showcases Beazley’s knack for unique direction and storytelling, and, even more so, that of a story that should be told. It follows two siblings from a part of Africa, seeking refuge in Europe, devastated by the journey to their Concrete Paradise. A worthy win for Beazley. 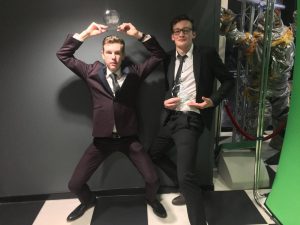 From Russia With Murder winners, Ben Hughes and Benedict Evans.

Runner up: Pippa Short for Brian

Audience Award: Won by From Russia With Murder. An audience favourite, the film made up a lot of all that was talked about during the half-hour interval between the films’ screening and the awards ceremony, and a great deal after everyone had gone home. And rightly so, for the sheer inventiveness of From Russia With Murder alone deserves recognition, and the genuine talent that makes up the screenplay and direction is, honestly, overwhelmingly impressive. Major props to Benjamin Hughes who wrote, directed and edited the project. 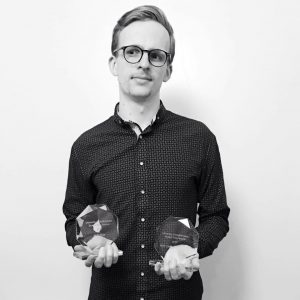 Leo Barton: The conclusive champion of this year’s festival.

Best Film: Won by Fortune Cookie. Yeah, it’s that guy Leo again. But you’d be wrong in thinking there’s nothing left to say about his efforts and that of his crew. Fortune Cookie expertly blends all the best bits of cinema into one nearly twelve minute rollercoaster ride of emotions and awe. From its cinematography, down to its editing, all the way to its direction, there’s a certain naturalistic sense in its complexity, one that no doubt engages every audience it comes across. Fortune Cookie, let’s get this straight, is a very pretty film. But it also has a great deal of depth behind it, and an impressive amount of work put into it. A wholly deserving win for the film, for Barton, and for the crew behind it.

Runner up: From Russia with Murder

Watch this space for The Edge’s review of Fortune Cookie. You can watch the audience award winning film, From Russia With Murder below.