Read more
You are at:Home»Film»Q&A with Denzel Washington
By Eddy Tesfay on February 11, 2017 Film, Interviews

The auditorium in the Curzon Mayfar, which had developed into an excited hubbub of conversation and anticipation after its screening of Fences, erupted into a rapturous ovation as Denzel Washington appeared down the isle, making his way to the stage. It was an applause that lasted for several minutes before eventually quietening down. Bowing in definite tongue-in-cheek fashion, Washington proceeded in his familiar charismatic, down-to-earth fashion as the conversation began about how Fences, the Pulitzer-winning play, first fell into his lap.

“…He [Scott Rudin] sent me August Wilson’s screenplay and he asked ‘what do you wanna do, wanna act in, wanna direct it, wanna produce it?’ and I said ‘well, I want to read it!”. He went on to discuss how up until then, he hadn’t read the play so he felt that originally, he might have been too young for the role, stating that he remembered James Earl Jones appeared as Troy Maxson in the Broadway adaptation in 1987. However, this said, he called Scott back up asking if he could do the play, kickstarting the 2010 revival which united much of the same cast that the film did, which included Viola Davis, Stephen Henderson, Mykelti Willamson and Russell Hornsby. 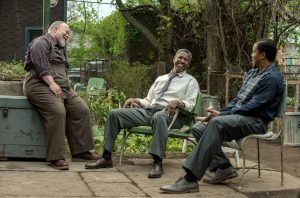 Despite fantastic reception for the Broadway revival, which received several Tony awards, Washington was reluctant to take the play to adapt it for film. “I was running and hiding” he remarked, which simultaneously caused the audience to chuckle but also indirectly lead onto an issue in Hollywood today. There’s no questioning the lack of roles for minorities in Hollywood, highlighted by the controversial #OscarsSoWhite campaign of last year. However, with the likes of Barry Jenkins’ Moonlight and Theodore Melfi’s Hidden Figures black-led casts this year, as well as Fences, there seems to be a shift in attempting to remedy this problem. Washington also touched upon on the fact that August Wilson famously stated that he refused to accept an adaptation which didn’t have a black male behind the camera. When asked about how, in the future, can the film industry advance in terms of diversity and should filmmakers who happen to be a minority press on without backing from studios, Washington replied “You can’t make a movie in a vacuum. You still need a theatre to put it in. It needs to be collaboration [with]studios”.

Washington then spoke about the process of adapting the play into a feature film, “August Wilson wrote a masterpiece. In America there’s Tennesse Williams, Edward Albee, Eugene O’Neil, August Wilson and Arthur Miller. He’s one of the great playwrights in American and world history and it’s the gift that keeps on giving. The most difficult part of making this film was the editing process because there’s just so much good stuff”. He continued, speaking about how gifted and fantastic the performances were, stating that he’d often (when behind the camera) dwell on the likes of Viola Davis for fear of missing out on great material, and also emphasised how he rarely gave notes to anybody onscreen. When questioned about how he approached Rose’s (Viola Davis) role and how strong her character is, he stated “I didn’t need to [approach it specifically]. Viola’s strong already and August Wilson wrote one of the greatest roles for an African-American woman of all time, she brings it to life like no one else could”. 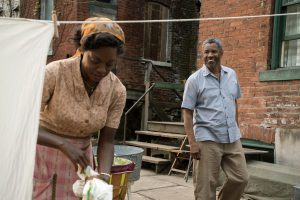 Washington impassionately discussed the process he went through and how hard it was not relating to his character and the father/son relationship, it’s evident that it was made from a place of great love and respect. “What I told them (when bringing the cast back together from the play) was let’s start from a place of love” Washington remarked. That love, as well as affinity for the work of August Wilson, seeps into the film despite this only being Washington’s third directoral effort.

With Fences being part of Wilson’s ten-part ‘Pittsburgh cycle’, there was always the chance that with a warm reception, the other nine plays could also be adapted. When questioned about this Washington smiled ruefully and stated “the other nine, we’re planning to do with HBO and I’ll probably start working on that next Monday”.

As the questions pressed on, Washington was asked how he approached adapting the play from a theatrical standpoint, as Wilson’s work was very much suited to the stage. “The actors asked me that and I said don’t do anything different. Honesty is honesty, it’s just that there’s a camera now”. Despite stylistically being the case, thematically it did not deter from the power that the story originally had. “I don’t think there’s too many words. If that’s the case, nobody should adapt Shakespeare”. Despite not having many directorial efforts underneath his belt, Washington was not a complete novice to the role. Having helmed the critically-acclaimed The Great Debaters (2007) and the equally well-received Antwone Fisher(2002) he knew what it took to wrestle many different thematic and technical aspects on screen. In the case of the deliberate decision to strip the film down to its bare bones in terms of camera work and set design, this corroborated with Washington’s desire to place Wilson’s work and the work of his actors at the forefront of the production.

The evening ended on a rather poignant note as the final question touched on what Washington was hoping would come of this adaptation of Wilson’s work and he remarked “I just hope they appreciate it. Black, white, blue or green it’s just great writing and there’s something in it that just touches us all. It’s beyond race, it’s beyond gender, he wrote a masterpiece and however he got to it I don’t know. I’m just glad to be a part of it”.

Fences (2016), directed by Denzel Washington, is distributed in the UK by Paramount Pictures. Certificate 12a.