Read more
You are at:Home»Film»Press Conference: The Light Between Oceans
By Anneka Honeyball on October 26, 2016 Film

On the afternoon before the European premiere of their latest film, The Light Between Oceans, Michael Fassbender, Alicia Vikander and director Derek Cianfrance made a welcome appearance at the film’s press conference in central London. Situated in the swanky Mirror Room of Claridges, we were lucky enough to be sat on the front row as they discussed the film’s themes, genre and performances.

Answering the first question about his initial attraction to M.L. Stedman’s novel, Cianfrance cited the emotion of the story as his main influence in adapting the tale. “When I first read it, I was so taken with the emotion of it. I was on a subway train in Brooklyn and I was crying during rush hour. It was so embarrassing but I felt if anyone else was reading what I was reading they would be crying too.” 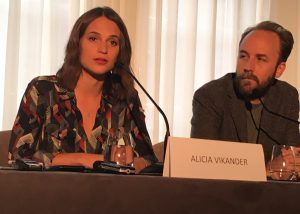 Attention then drew to Vikander, whose rising star and magnetic presence is as effervescent as ever following her recent Oscar win. Speaking of her character, Isabel, Vikander discussed the different layers of her character and how complex she was to decipher. “She’s an interesting character. When you find her at the beginning of the story, she’s still young and becoming a woman. She’s still quite naive but she has this immense amount of life spirit within her. What I loved in both the book and the script was that there was an element of this young woman that is almost unlikeable at the beginning because she’s so upfront and acts and says things without thinking. But she never does anything without it coming straight from the heart. She wants to do good. I admire her for wanting to believe in life and create life and believe in love and find a husband and create a family. It’s a big arc for her in the story, becoming a woman and a mother.” Vikander later added that it was “interesting” to play “ordinary, good people that don’t make the best decisions. They’re relatable, they’re flawed but they only act with true emotion and goodness.”

Fassbender also chimed in with words on his character, Tom, and what he had to bring to the performance. “It was something that Derek and I talked about; what Tom is bringing with him when we meet him. I was very aware that it had to be written on his face, in his soul that he’s almost carrying this sort of shadow of death and France and trench warfare and the horrors of World War I with him. Everything about him is that war. The fact that he survived it. He’s carrying around this sort of survivors guilt with him and the fact that he seeks a job that puts him in absolute isolation meant it was something I had to be focused on.”

Expanding on the themes of guilt, religion and faith, Cianfrance revealed that he drew upon his own experiences as a Catholic when it came to thinking about the journey these characters embark on. “These characters definitely live in that world, especially Tom at the beginning of the movie, of guilt and sin. Throughout the course of the movie, one of the things I loved about the story is that it’s ultimately a movie about forgiveness. Forgiveness of his sins, of their sins, of the human error really. To me, this movie was ultimately just a human story. Rather than humans that make mistakes, they make mistakes with good intentions. To me the role of religion was people forgiving other people for just being human”.

Vikander agreed, noting that the story was very different to the tales we are used to. “We can all relate to these characters. Normally in stories nowadays like this we try to find a protagonist and a villain and you can’t really in this story and that’s the beauty. You feel for all these characters, even the ones who have made a terrible, terrible choice because in the end they find a way of taking responsibility for their actions”. 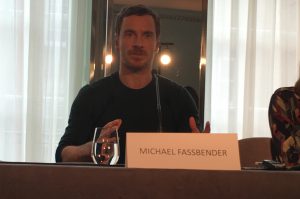 After forgetting the question momentarily and flashing a dazzling grin, Fassbender also chimed in with his thoughts on how faith shaped his character. “For Tom personally, his experiences in the war warrant me to believe he is a religious person. In the book, he makes a pact with god, that if he gets out of this alive, he promises not to bring any harm to another human being again. And so I think perhaps being in that scenario as a soldier and being so close to death and the possibility of dying, one would find a newfound faith if he hadn’t already. So I think he’s somebody who believes in god and that there are consequences in this life and the next.”

Cianfrance then went on to discuss his thoughts on the melodrama as a genre, revealing that his “entire childhood” was spent watching the films of Douglas Sirk, Emeric Pressburger, Victor Fleming, David Lean and the popular US melodrama, Days of Our Lives. “My entire childhood was like sands through the hourglass watching Days of Our Lives,” he quipped. Citing the “emotional truth” of the genre as his main focus, Cianfrance explained: “When these characters make emotional decisions, their emotions have to be heightened. These characters are emotional – they’re in such a ripe, emotional state all the time in the movie, so all we thought about was to approach those emotional moments as truthfully as possible and I had two of the greatest actors on the planet attacking that with me. We were all kind of like truth metres for each other.”

In response, Fassbender contemplated on the film’s complexity and the difficulties of playing to such strong emotional climaxes in the story. “[The melodrama] is a scenario where the good is good, the bad is bad and they’re all played pretty one dimensionally. I could call this film a melodrama at times but in a weird way the good people aren’t making bad choices… it’s an interesting thing. All we do as performers is try and give as many options in a given scenario, playing scenes with different intentions and emotional content for the director to mould into their vision.”

Discussing the picturesque location of the film, Cianfrance revealed that scouting for a space suitable to shoot proved tricky. “I spent like six months trying to find the perfect place. We were going to shoot in Australia but then Pirates of the Caribbean came in to town and took all the tax credit away, so we had to go find another spot. So we went to New Zealand which is such a gorgeous country. It’s further south so the light was really beautiful there.” After turning down various islands because of their “indigenous lizards” and “stuffy” lighthouses, the crew eventually decided on a remote island an hour and a half away from any sort of civilisation. “I like going to camp when I’m making a movie and I thought the isolation would be a good factor to us in making the movie and I think it was in some ways. We had nowhere to go, we didn’t have technology to escape to, we didn’t have many distractions, we just had each other.” 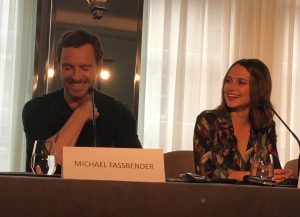 Bringing focus back to the challenges of their roles for the penultimate question, Vikander and Fassbender revealed their first impressions of their characters in the novel. “The biggest challenge taking on Isabel was the fact that when I read it I didn’t immediately fall in love with her, ” Vikander revealed. “I was impressed by her energy and force but she was also a girl who sometimes was a bit naive and outspoken.” Fassbender also gushed about the admiration he held for his character. “With Tom when I read it I was so taken to him. He’s like a hero to me, a man from a bygone era, there’s a stoicism to him. He’s a quiet man; he doesn’t vocalise what he’s feeling and yet he has huge dignity to him and loyalty.”

Answering the final question about his favourite part of creating the film, Cianfrance enthused about his leading couple. “To get on set and have the story start to become real and have these two great actors living in these roles is the most thrilling moment to me. Over the course of my life as a director, there are only a few days to shoot so to me that’s where essence is. My experience, observing these guys, Michael was like the heavyweight champ and Alicia showed up like the thoroughbred who kept running – they kept raising the bar for each other. It was just wonderful to watch these two great performers constantly raising the bar and pushing each other.”

The Light Between Oceans, directed by Derek Cianfrance, is distributed by Entertainment One. Certificate 12A.