Read more
You are at:Home»Film»One to Watch: Manchester by the Sea
By David Mitchell-Baker on October 25, 2016 Film

With a great cast, a talented director and a simple yet effective story, Manchester by the Sea is undoubtedly a movie to keep on your radar when it opens here in the UK on January 13th 2017. 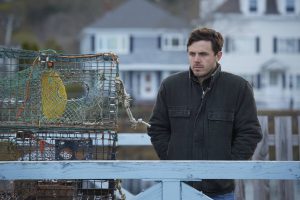 Starring Casey Affleck, Michelle Williams and Kyle Chandler, Manchester by the Sea tells the story of a man (Affleck) who suddenly becomes the legal guardian for his nephew (Lucas Hedges) after the death of his brother (Kyle Chandler). Whilst director Kenneth Lonergan only has thus far two directorial credits to his name (You Can Count On Me and Margaret), he is perhaps better known as the screenwriter for both Analyze This and Gangs of New York, so we can almost definitely expect a stellar screenplay to accompany the already heartfelt and interesting story of the film. On top of this, Casey Affleck has previously received critical acclaim for his lead performances in The Assassination of Jesse James by the Coward Robert Ford and Gone Baby Gone, so a role such as this seems like one which he will be able to really sink his teeth into and provide us with another excellent lead performance.

But are you really sold on the film so far? Well if not then it’s important to note that through its debut at the Sundance Film Festival and recent screenings at the Telluride Film Festival, the film has received unanimous critical acclaim, with many claiming it to be the best film of the year and an easy front-runner for the Academy Awards. Praise thus far has focused on Lonergan’s direction, the lead performances and its emotive and heartstring-tugging themes. And, all things considered, it’s easy to see why. Manchester by the Sea is another success story in the long line of recent independent smash hits, many of which have received high acclaim and significant popularity after breaking out of their indie limitations. This is just another reason as to why you really must catch Manchester by the Sea in cinemas; the independent scene is growing in quality and fame year on year and with our money and support, it can continue to excel and earn the popularity and profits they so richly deserve.

I predicted just a few months ago that Manchester by the Sea would be one to watch for the Academy Awards, and as its highly anticipated release approaches, it’s looking clearer with each passing week that this could be one of the great American movies of recent years.

Manchester by the Sea, directed by Kenneth Lonergan, is expected to be distributed in the UK by Studio Canal on 13th January 2017. Certificate TBC.