Read more
You are at:Home»Film»On Set With: Three Acts
By Harley James Mitford on September 20, 2016 Film

The Edge recently had the opportunity to visit filmmaker Tom Sands and his team on location in Tunbridge Wells as they shot the upcoming film Three Acts. A contemplative drama that focuses on an actor who suffers from multiple personality disorder, the film is a radical departure from his recent high-octane thriller The Holly Kane Experiment. Back when The Holly Kane Experiment film was being made, The Edge visited the filmmakers on set and penned the first ever ‘On Set With’ about the experience. We were lucky enough to see Tom Sands at work again. 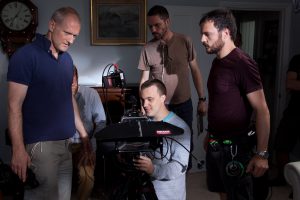 When I arrived at the location the door was left ajar. Not sure whether or not to knock I made the blunder of walking straight in, interrupting a shot in the process and getting sharply shushed by producer Phil Harris. An inauspicious start then, but once I was introduced to the various cast and crew members and started chatting with them in-between shots, the initial awkwardness of my intrusion soon subsided. Speaking with director Tom Sands during one of the few lulls in the frantic activity, he explained to me what the film was about, as well as the process of creating it…

Could you catch me up on the premise?

Tom: So it’s about an actor struggling with dissociative identity disorder, which is what’s formally known as multiple personality disorder. He has three personalities: his ‘vulnerable’ personality, his ‘angry’ personality, and his ‘sexual’ personality. He gets a role in a play where he is required to be constantly angry, he simultaneously falls in love with the make-up girl, and he enters therapy all at the same time. So it’s a pretty intense couple of weeks for him. On the surface the story is about the play and whether he can pull that off, but it’s also about the breaking down of his personalities and him coming to accept his condition. We’ve worked with a psychotherapist for a year with the script, trying to get it accurate. We’ve had meetings with him, Sandy’s (lead actor) met with him, Adam’s (supporting actor) met with him. We’ve also been speaking to people with dissociative identity disorder, so we’re hoping that it’s going to be the first film that’s done it in a compassionate way. 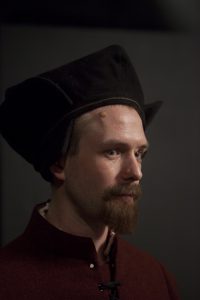 I guess you’ve got to be careful if you’re tackling something that complicated, to represent it in a fair way.

Tom: Yeah exactly, you have to. I think it’s your duty to do it justice. Obviously we have to take some liberties, for example: the film ostensibly happens over a two week period. There’s no way that the amount of progress they make in the film could happen in that short a time. It would have to be over two years or more. But apart from that we’ve tried to keep it as accurate as possible, and obviously for Sandy it’s a huge performance; it’s three performances in one really. So it’s a tough role for him but so far he’s doing brilliantly… It’s been fun to shoot in Tunbridge Wells as well because I grew up here.

Oh ok cool, so it’s kind of a homecoming?

Well I was wondering, because it seems like a sort of ‘mate’s house’ situation.

Tom: This (the house being filmed in) we got literally from flyering and knocking on doors, trying to get the location.

It’s a lovely house, just spacious enough to get everybody in. 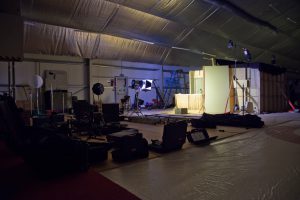 Tom: Just! But next week we’re in an ice rink. It doesn’t have any ice in it, but we’ve built a set for Rupert’s (Sandy’s character) flat. So that’s much more spacious. On the outside it looks like a piece of plywood, but from the inside it looks like a real flat. That’ll be really fun- to work in a stable environment. Then after that it speeds up a bit and we’ve got a new location every day, so there is a bit of that guerrilla element to it too. It’s been really nice to have a bit more time (than on Holly Kane) to work with the actors. We’ve been doing six or seven takes, instead of one or two!

So specifically today, is it a conversational scene you’re shooting?

Tom: Therapy scenes. Adam is playing Angus, Rupert’s therapist. So it’s talking, but also shouting! They are quite intense therapy scenes. We’ve just filmed the climactic one, and we’re about to shoot Rupert on the other side of the door just as he’s walked out- quite an intense emotional reaction. And then we’ve got a couple of scenes in the kitchen with Angus playing off his own home environment. They should be fun to shoot. 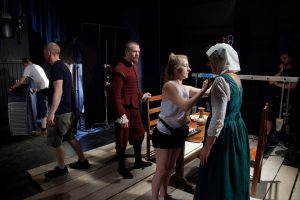 We left it there as Tom had to get back to shooting. I soon got chatting in the meantime with costume designer Alicia Lording, who told me excitedly about the Tudor costumes she got to work with in the theatre scenes. She also enlightened me as to the importance of the lighting in regards to its effect on the colour of the costumes, and how the two arts are so heavily interlinked. Actors Sandy Batchelor (Rupert) and Adam Astill (Angus) both spoke about their characters, the complex personal relationship between the two, and the various challenges that the respective roles presented.

During my visit we all stood round watching the playback of the climactic therapy scene. So powerful was Sandy’s facial expression as he rushed through the door that you could’ve heard a pin drop in the room. The atmosphere was incredible; stunned into total silence the crew and myself watched the footage aware that we were witnessing something special- a great actor giving an extraordinary performance. And just off the strength of that one facial expression I’m already convinced that, like The Holly Kane Experiment, Three Acts will prove to be an engaging exploration of thoroughly original and delicately nuanced ideas.

Three Acts, directed by Tom Sands and produced by Substantial Films, is currently in production, Certificate TBA. Watch the trailer for the recent film The Holly Kane Experiment below.