Read more
You are at:Home»Film»In Criticism of The Revenant
By David Mitchell-Baker on May 17, 2016 Film

Over budget, off schedule, a frantic globe trotting filming process and some of the biggest and critically adored names in the business on board, Alejandro G. Iñárritu’s revenge western The Revenant is a big ol’ bruised beast of a movie. The film had a well chronicled troubled production; location changes at the bequest of Iñárritu and his cinematographer, Emmanuel Lubezki, to maintain their desire for natural lighting, snowy landscapes melting away, DiCaprio apparently torturing himself for the lead role of Hugh Glass and the seemingly constant need for more money to finance the project. Given the circumstances, the studio must have been over the moon to see the movie strike gold with audiences (over $520 million worldwide at the box office) and critics (12 Academy Award nominations). 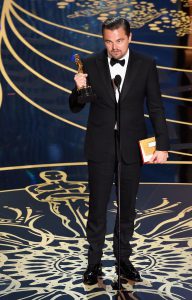 From day one of the marketing, when those first images of Leo in full frontiersman mode hit the web, the movie seemed a sure fire bet for Oscar’s gold and to achieve status as an instant classic. How could it possibly go wrong with Iñárritu (the reigning best director in the world), Lubezki (2 time Oscar winner), Tom Hardy and Leonardo DiCaprio as part of the team? The movie proved monolithic during awards season; DiCaprio nabbed pretty much every award possible (including that elusive Oscar), Iñárritu grabbed himself a number of directorial awards and the film won several Best Picture/Film awards including the BAFTA and the Golden Globe.

Surely, surely, the Best Picture statue at the 88th Academy Awards was in the bag? The analysts seemed in agreement that the film would take the top prize and it seemed to be the people’s choice to win also, no one had a bad word to say about it, how could it not win Best Picture?!
Morgan Freeman stepped onto the stage, envelope in hand. “And the Oscar goes to…” everyone waited for the inevitable “… Spotlight“.
The little indie film about an ambitious and brave team of journalists had felled the Goliath of the awards season. “How could this have happened?” people cried. “The Revenant was robbed” and “Spotlight was mediocre” others claimed.
Well, I think it may have lost because it’s not the transcendent masterpiece that everyone claims it to be…

To get the obvious out of the way – yes, the movie is a stunning visual triumph.
The cinematography is breathtaking, the use of natural lighting sets the scene perfectly and helps for a more immersive experience, the effects (both practical and special) are excellent and it’s honestly very difficult to tell the difference between what is real and what is fake. Iñárritu showcased his astonishing visual capabilities with Birdman and the translation of these skills from modern day New York to 19th century American west is a successful one.

And yes, Leo is great in the movie. Best lead male performance of the year? No, that belongs to the criminally under seen and under appreciated performance from Jacob Tremblay in Room. I personally preferred Tom Hardy’s performance as John Fitzgerald, he played the role of the heartless murderer with real conviction and grit, when he wasn’t mumbling about pelts that is. Domhnall Gleeson and Will Poulter, especially the latter, are both excellent also.

The film’s opening 40 minutes are exhilarating, tense and savage. Several well crafted sequences, most notably the opening Native American attack on Glass and his party, set the movie off on a nice pace and have you gripped from the get go. There’s some remarkable filmmaking at hand. 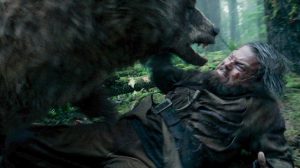 The bear attack (image via IMDb).

The famous bear attack scene is both the film’s best and worst scene. Best because of how well constructed the whole ordeal is; one continuous take, no use of score, DiCaprio’s raw and frightening performance. It’s quite brilliant.
So why is it also the worst? Because this is where the movie nose dives.

The middle third of the movie is a real slog. Good Lord does this movie get boring. As pointed out by the Honest Trailers team, most shots transition with a 10 second shot of the sky, or a tree, or a mountain, or a river, or some other form of nature. Yes Iñárritu, we know that the environment is still there. These shots may be beautiful, but they add up to a run time of over 2 and a half hours which really should be shorter. This whole section of the movie chronicles Hugh Glass’ struggle to get back to his party and, more importantly, Fitzgerald. We follow Glass across fields, valleys, rivers, mountains, forests… more fields… more valleys… more rivers… you get the picture. It’s a seemingly never ending patchwork of Glass vs nature, some of these survival scenes are good (his horse suicide dive is where the movie picks up again), but most of it is just lethargic. The story does hardly anything to serve the movie during these parts as well, to the point where you kinda forget that there’s meant to be one.

DiCaprio’s performance here is reduced to a number of grunts and screams, as well as some grimaces, and not much else. It’s solid but unspectacular work from a man who can do so much more, one can’t help but feel that this maybe wasn’t the role for him? I’d like to throw the idea out that maybe he and Tom Hardy should’ve switched roles, Hugh Glass seems to be a physical role more suited to Hardy’s strengths. As great as Leonardo DiCaprio is in parts, one can’t help but wonder what kind of masterful performance Tom Hardy could have given. 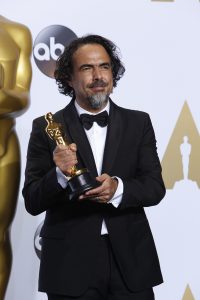 Iñárritu and his second consecutive Academy Award for Best Director (image via oscar.go.com).

With little to no dialogue at times, The Revenant is a difficult movie to engage with, especially considering how phenomenal a job Iñárritu did with Birdman, a far superior movie that is somehow not getting the praise it deserves in comparison to The Revenant. Iñárritu’s writing was a strong part of Birdman, as much as the visuals were breathtaking, so it’s disappointing to see the Mexican director be restricted in one of his strongest areas by the source material. His direction, whilst still very good, pales in comparison to what we know he can do, his Oscar win was highly debatable given the strength of direction in Room and Spotlight (with regards to Mad Max: Fury Road, I personally feel that the movie’s strengths were in its editing, cinematography, effects, stunt work etc. things not necessarily under George Miller’s direction). Whereas Room and Spotlight were tight, well paced and phenomenally constructed across the board, The Revenant is a bloated and uninteresting Frankenstein’s monster of a movie.

To sum up just what is wrong with The Revenant, I like to use this analogy. Think about the scene at the beginning of Anchorman when Ron Burgundy is sat in front of his mirror and he says “I look good. I mean really good. Hey everyone… come and see how good I look!” The film is way too concerned with looking the part of an excellent movie and telling you that it’s such a visual phenomenon that it lacks the depth to be anything more. It’s the eternal struggle of style over substance and The Revenant clearly lacks in the latter.

It’s not a bad film, it is very good, it just simply is not as good as Iñárritu’s masterful Birdman and it very much is not of the quality that many claim it to be.

The Revenant (2015), directed by Alejandro G. Iñárritu, is distributed in the UK by 20th Century Fox. Certificate 15.