Read more
You are at:Home»Features»A Quiet Place and the Rejuvenation of the Horror Genre
By Nathan Jones on April 14, 2018 Features, Features, Film
Horror films – something we love to hate. There isn’t another genre out there that has us quite on the edge of our seats like a good horror movie and a shaky bag of popcorn. However, this genre is constantly changing to meet audience expectations and make sure that people are still jumping, shaking and biting their nails all the way through. But, has the horror film always changed for the better? As an audience we’ve seen German Expressionism give us The Cabinet of Dr. Caligari, Hitchcock’s psychological thrillers Psycho, Rebecca and The Birds (to name a few) and the late seventies and early eighties bring us almost meaningless bloodshed in the form of the slasher, notably A Nightmare on Elm Street and The Texas Chainsaw Massacre. It can be said that the horror genre has definitely been there and got the t-shirt.
Thus, stating that we’ve reached a point in horror where everything’s been said and done doesn’t seem an exaggeration. There has been an array of remakes, with It, A Nightmare on Elm Street and The Texas Chainsaw Massacre all being rejuvenated (although not always for the better) at some point in the last ten years or so. Have we reached a brick wall of the imagination? Although we now have better special effects, meaning that films such as Saw have us throwing our lunch up at the sight of severed limbs, it seems that the narratives have suffered. 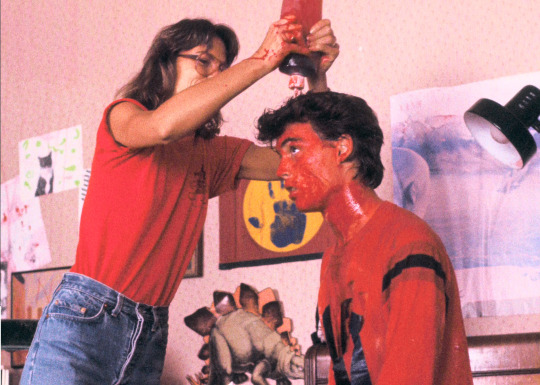 Johnny Depp behind the scenes of A Nightmare on Elm Street (1984). Credit: Jim Doyle/Vulture/New Line Cinema

For instance, Johnny Depp being sucked through the bed and splashing out what appeared to be 100 bottles of ketchup from the local supermarket may have been a bit unbelievable, but I’d watch the original A Nightmare on Elm Street over the 2010 version every time. For me, all of the Saw movies have blended into one giant mess of blood and guts. The recent Jigsaw provided much of the same. Films including Insidious and The Conjuring provided a little hope with their ability to create suspense and fear without much gutsy bloodshed. James Wan and Leigh Whannell crammed their creative minds together and provided us with something different from the slashers that seemed to be what was out in the cinema from the horror genre. However, they’re not exactly the most critically acclaimed masterpieces. Could John Krasinski’s A Quiet Place be the answer to this repeated predicament within the genre?

The film received a whopping 95% score on Rotten Tomatoes and 81% on Metacritic (and also five stars from us!). What is it about this horror that rises it above the rest? In a clip provided by Paramount Pictures Krasinski explained that “The only people these family have to rely on is each other.” This is the answer to the film’s success (especially in comparison to other horror films). In this narrative we are provided with in-depth characters that are easy to relate to and empathise with. We easily can place ourselves in their position. Emily Blunt (who co-starred in the film alongside her husband) did exactly that: “For me in many ways as a mother it represented my deepest fear”, she admitted.
This isn’t a horror for the sake of a horror. Krasinski provided us with a family, a family that through our understanding and compassion, we want to protect. Therefore, when the sound seeking alien type monsters come for them, we have a deeper fear as we are more invested in the narrative. A Quiet Place avoids the typical character tropes of the horror genre such as the promiscuous girl that is always killed first, the jock that was most likely involved with her and Carol J Clover’s ‘Final Girl’ who is always left standing, tropes which have made horror narratives predictable and therefore, often tedious for the avid cinema goer. A Quiet Place provides us with a refreshing look at the horror genre and marks itself as a serious contender for some great critic reviews and hopefully some wins during the next awards season!
A Quiet Place (2018), directed by John Krasinski, is distributed in the UK via Paramount Pictures. Rated 15.
Share. Twitter Facebook Google+ Pinterest LinkedIn Tumblr Email