Read more
You are at:Home»Features»Anticipating Infinity War: bringing ‘The Event’ to the big screen
By Sam Law on February 21, 2018 Features, Features, Film

On April 27th 2018, Disney and Marvel Studios look set to drop the cinematic event of the generation in the culmination of the Marvel Cinematic Universe to date, as Avengers: Infinity War makes its way to our screens. To say this film is highly anticipated is an understatement: the trailer racked up a record-breaking 230m views in its first 24 hours alone. But aside from watching Earth’s mightiest heroes take on their greatest adversary to date in Josh Brolin’s Thanos, I’m excited for the release of Infinity War for one other very important reason. Since one end-of-credits Easter egg back in 2008’s Iron Man, Marvel have been edging closer and closer to the realm of comics in creating a vast shared universe with films that not only tell their own stories, but advance plot points set up by previous entries in the MCU. With Infinity War, this trend is set to come to a head with the first true ‘Event’ in film history, closing the gap between comics and film, and possibly having a lasting and dramatic effect on the entire blockbuster film-making industry. 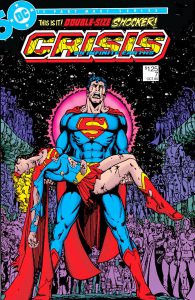 Comics have a decades-old history of telling stories in detailed and intricate shared universes, with team-ups such as the Justice League and the Avengers first appearing on the pages of our favourite books over half a century ago. But with such a wide array of characters, team-ups, and stories to tell, comes the temptation to produce blockbuster series, featuring all the heroes and villains we know and love, and placing them in the middle of some monumental plotline whose aftermath has far-reaching consequences for the shared universe as a whole. This, in a nutshell, is the ‘Event’: an extensive run of comics that draws on the influence of the past of the comic’s universe, while setting a course for the future for pretty much every character you care about. Are you a Spider-Man fan, or are you more into the Guardians of the Galaxy? Either way, you’ve got to read the event to understand where all the key players are in your hero’s next big comic book run.

The best events have completely reshaped a universe’s continuity (Crisis on Infinite Earths, Flashpoint), reintroduced corners of the universe many had forgotten about (Annihilation), or challenged our heroes in shocking but captivating ways (Age of Apocalypse, Avengers Disassembled) – If you’re into your superheroes at all, go read about those stories online, and if they sound at all intriguing, find a physical or digital copy to read. It’s worth it. Considering their magnitude and promise of spectacle, it’s therefore unsurprising that events have proven to be some of the most popular runs in all of comics: Marvel’s 1980s Secret Wars storyline, in which a motley crew of the publisher’s most widely-recognised heroes and villains were transported to a mysterious battle-planet (it sounds ridiculous but it’s awesome), was a major factor in igniting the ’90s comics boom and even led to a 2015 “sequel”, whilst the 2006 event Civil War directly inspired the 2016 Captain America film of the same name, if on a much smaller scale.

That last one is important. For although events have a long tradition in the comics, they are yet to have had any real equivalent on the big screen. But since 2008, Marvel have been working tirelessly to change all that, and in the process have almost single-handedly shaped the contemporary blockbuster landscape. With this year’s Infinity War, they look set to do it again. 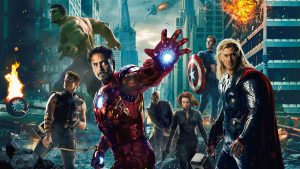 Before Samuel L. Jackson’s surprise end-credits scene at the end of Iron Man, shared universes were pretty much contained to the comics. Obviously, you had sequels both in and out of the superhero genre – who doesn’t want to see more of the characters and worlds from films they adored in the cinema? – but the idea of a character from some other movie franchise turning up in the middle of the film you’re currently watching, and the plot threads of those characters weaving together, was foreign to most movie audiences. 2012’s Avengers and its $1.52b box-office haul shattered all of that. Suddenly, everyone wanted a shared universe, from DC quickly setting up a Superman reboot in 2013 leading into 2016’s Batman v. Superman and 2017’s Justice League, to Universal attempting their own “Dark Universe” of their classic movie monsters (which unfortunately but dramatically failed after 2017’s critical and commercial failure The Mummy). Of course, shared universes are still far from a given in film (particularly as they’ll typically only form out of blockbusters, whose sequel-friendly make-up naturally lends to shared universes itself), but it’s a far cry from the days of Tim Burton’s Batman and Batman Returns, in which continuity was basically a non-given.

So how is Infinity War looking to change all this? Well first of all, by taking place over two films (2019’s as-yet untitled Avengers 4 was formerly known as Infinity War: Part II, and still looks set to follow on from this year’s massive event). Comic events, by definition, need be huge in scale, often requiring multiple books from other series to lead up to them and being released over numerous entries themselves. With so many plots to cover, and so many characters to check in on, events can take months to complete; DC’s 52 run took place over the course of a whole year. So it makes sense that, for Infinity War to tell a complete event, it must also be split into separate parts – with the upcoming Ant-Man and the Wasp and Captain Marvel serving as tie-ins to the whole, gargantuan thing. This is partly why, despite being adapted from an event, Captain America: Civil War plays more as a team-up movie in the style of the first two Avengers films. Despite clocking in at a hefty 147 minutes, it just doesn’t have the size or the scope to tell a full event, whilst the continuity of the MCU wasn’t as affected as you might expect from an event; none of its main characters died or had their backstories dramatically altered, and we were only fleetingly introduced to two new characters – Spider-Man and Black Panther – who both had their own solo films scheduled by that point anyway (films that don’t require you to have watched Civil War to understand them). 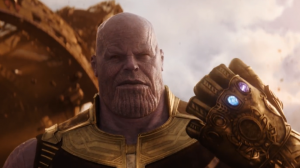 Infinity War and its sequel, however, look set to break the mould. There are only two MCU films scheduled post-“Part II” to carry on the MCU, giving directors Joe & Anthony Russo and producer Kevin Feige unrivalled scope to determine the long-reaching consequences of these films. For the first time in the MCU, we don’t know what’s coming next, so we don’t know who will survive and who won’t; Black Panther was a terrific film, but lacked some dramatic tension due to the fact that we knew the titular hero would feature in the upcoming Infinity War. We knew he would survive his film, and probably come out stronger. With Infinity War, there are no givens. In the style of a true comic book event, anyone could die; anything could happen. This is probably the first time a superhero film has been this way, and it’s incredibly exciting. The fact that many of the franchise’s main actors’ contracts run out after Avengers 4 (Robert Downey Jr., Chris Evans, Scarlett Johansson, Chris Hemsworth and Tom Hiddleston, to name but a few) – meaning they aren’t guaranteed to appear after that film – only adds to this tension.

Getting back into scale – I just want you to understand how massive we are expecting Infinity War to be. A rumoured 67 characters are scheduled to play a part, and a massive 40-character splash-page fight is set to dwarf Civil War‘s infamous (and exceptional) airport scene. Literally the entire Marvel Cinematic Universe has been building towards the next four films (but especially Infinity War and Avengers 4). If this isn’t the cinematic equivalent to a comic book event, I don’t know what is.

So how far-reaching could we expect the effects to be? To be honest, outside of blockbuster cinema, I don’t expect Marvel’s adaptation of the comic book ‘Event’ to have much of an impact. Cinema has evolved over the past century and a half to tell self-contained stories, told in one sitting over the course of 90-150 minutes on average. By-and-large, Infinity War won’t change that. But in the blockbuster landscape, and to directors savvy to the appeal of interconnected stories to today’s interconnected world, the effects could be profound. Already we have J.J. Abrams building up his Cloverfield universe, with 10 Cloverfield Lane and The Cloverfield Paradox building upon the original 2008 hit over the past couple of years. Activision are working on building a Call of Duty cinematic universe which, if executed correctly, could spawn the next generation of war and action hits. Lego built upon their 2014 hit with last year’s Lego Batman and Lego Ninjago movies. Even Lucasfilm are expanding beyond the traditional “saga” films to explore everything the Star Wars universe has to offer. And of course, the remaining studios owning film rights to superheros are following Marvel and Disney’s lead, having developed huge cinematic universes of their own over the last decade.

All that said, this could all be simple hyperbole. The failure of Universal’s “Dark Universe” and the critical panning of The Cloverfield Paradox demonstrates just how difficult it is to craft a cinematic universe. Such difficulty may well lead to Marvel becoming the exception rather than the pioneer, as studio after studio fail to build their universes up enough to even attempt an ‘Event’ in the vein of Infinity War. But if that’s the case, then Infinity War should be even more cherished: as the one Event that actually made it to our screens. Either way, anticipation is through the roof for Marvel’s latest as it looks set to be the cinematic event of a generation that cannot be missed.

Avengers: Infinity War releases in the UK on April 27th. Watch the trailer below: