Read more
You are at:Home»Features»How Game of Thrones brought the world of Ice and Fire to life
By Sam Law on March 20, 2017 Features

Game of Thrones. Over the last six years, those three words have become synonymous with epic battle scenes, shocking plot twists, and, maybe most importantly, a fully realised and immersive fantasy world. Possibly more than any other show on TV, Game of Thrones has succeeded in bringing to life the world that its characters inhabit, with the sunny vistas of King’s Landing standing apart from the bustling canals of Braavos and the cold, hard bitterness of Castle Black. With the recent teaser for the show’s seventh season racking up 3.5 million views in just 48 hours, it seems a fitting time to look at how Game of Thrones took George R. R. Martin’s epic fantasy world from page to screen, becoming one of the most believable and engaging fantasy series of our time in the process. 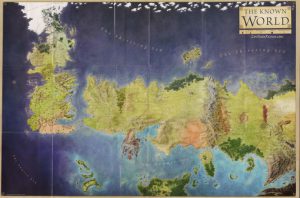 The known world, according to George R. R. Martin. Image by Jonathan Roberts

Of course, before Game of Thrones could bring the continents of Westeros and Essos to life, those continents needed to have been dreamed up to begin with, and for that we can thank the author of the Song of Ice and Fire books that Game of Thrones is based on, George R. R. Martin. Over the course of six huge main books, as well as multiple spin-off stories set within in the same universe, Martin has crafted a massive and diverse yet believable world for his characters to inhabit. In fact, the world he has created is so immense that there is a 336-page book dedicated purely to mapping it, and people have felt compelled to compare the size of Martin’s planet to our own (planet Westeros is about 90-105% the size of Earth, if you’re wondering). Needless to say: the world of ice and fire is gargantuan.

But what’s more impressive is just how populated the world of Westeros and Essos is. From the eerie icy wildernesses beyond the Wall such as Hardhome, to far-off isolated city states like Qaarth and the strongholds of the great houses of Westeros such as Winterfell, each location has a story to tell, and this more than anything else sells the illusion that Martin’s world is real. Think about it: would you feel as connected to Castle Black (especially during its battle with the wildlings) if it wasn’t falling into disrepair from centuries of indifference from Southern lords and kings? Or would you care so much about the Iron Throne if it hadn’t been the seat of the Queen or King of Westeros for the past 300 years? The world Martin has created then is both huge and yet also finely detailed, with its size, scope and history bringing it as much to life as is possible from the pages of a book. 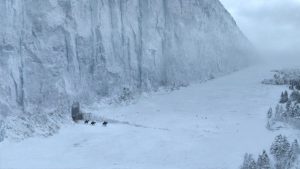 The triumph of Game of Thrones is to take the world of Westeros and perfectly visualize it on screen. Utilizing fantastic art direction and cutting-edge visual effects, showrunners David Benioff and Dan Weiss have faithfully recreated many of the more important locations from Martin’s books. More than that, Game of Thrones‘s script and the performance of its actors, just as in Martin’s text, alludes to greater mysteries lying further afield, and of the histories of the places we get to see. When Jon Snow is told that the land beyond the Wall is a perilous and lawless place, we dread any expeditions he takes North without ever having seen him encounter a white walker or wildling. Similarly, Pedro Pascal’s fine performance as Oberyn Martell in season 4 had us eagerly anticipating seeing his homeland of Dorne for the first time in season 5.

Naturally, solid character development and storytelling go a long way in building an immersive and believable world. Without great characters to inhabit it, and compelling adventures for them to undertake, a fantasy world would fall flat on its face, no matter how finely crafted. This is where Game of Thrones truly shines. Notorious for having an impossible-to-remember-ly large cast, the lands of Westeros and Essos are densely populated with a variety of interesting characters, from the humorous fan-favourite Tyrion, to the determined, ambitious Daenerys and the walking middle-finger that is Joffrey. What’s more is the genuine and yet unpredictable ways these characters interact, crafting a story with more fan theories than grains of sand on Earth and enough shock twists to keep even M. Night Shyamalan on his toes, exploring the full depth of the fantasy world of Westeros. 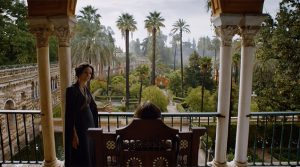 The Dornish water gardens, filmed on location in Spain. Image via HBO

The locations we see on-screen do just as much as the narrative and performative elements to bring a fantasy world to life, and Game of Thrones is no exception. Filmed across six countries to fully realise the diverse landscapes of Westeros and Essos, Benioff and Weiss spared no expense to immerse us in the world their show is building. The location often provides the perfect touch of authenticity to a scene, foregoing the need for CGI which runs the risk of falling into the ‘uncanny valley’ and breaking the illusion that what you are watching is truly, tangibly real. Just take a look at the Dornish water gardens of seasons 5 and 6, filmed in the incredible Alcazar de Seville in Spain to truly capture the Dornish climate and architecture as described in the books. Game of Thrones is full of perfect filming locations, and this connection of the physical world to what we see on TV really helps bring Westeros and Essos to life.

Finally, Game of Thrones‘ score plays a subtle yet vital role in immersing us within the show. Composed by Ramin Djawadi, the sounds of Game of Thrones compliment the imagery, making us relate to what we are seeing on-screen. Add in themes for each major house and location, and you have an almost unnoticeable extra layer that connects us to the characters and distinguishes them from each other.

There are still many locations and characters from Martin’s books yet to be introduced and explored in Game of Thrones, leaving the possibility open for Benioff and Weiss to build an even larger world on-screen than the one they have crafted over the past six years. However, as the show converges plots and characters as it gears up for its final two seasons, it seems unlikely that the world of Game of Thrones will exapand in the near future. But that’s not to say we’ve seen all we’re going to see of Westeros on our screens – with an array of side-plots, prequel books, and historical events, Martin has filled up his world enough for a Game of Thrones spin-off show to conceivably air in the next few years (HBO are certainly up for carrying on with Westeros). As long as any spin-offs follow Game of Thrones‘s example of perfect world-building through fine scripting, terrific acting, filming in the right locations, and composing an impeccable score, you can sign me right up.

Check out a behind-the-scenes look at Game of Thrones below: