Read more
You are at:Home»Features»Wait, isn’t he a songwriter?
By Sarah Whittington on November 29, 2016 Features

So, someone won the Nobel Prize for Literature last month. Awards, articles and a measure of eternal literary fame now beckon, obviously. Recipient: Bob Dylan. Wait. Isn’t he a songwriter? Or is this for one of those (probably ghost written anyway) celeb autobiographies? What even is literature? Why is the sky blue? What has the world come to? 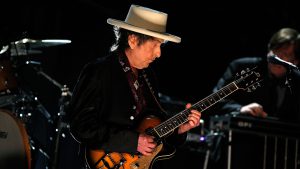 There’s the opening argument, of course, that something along the lines of Rihanna’s ‘Work’ isn’t exactly brimming with the hallmarks of classic literature. Isn’t literature something written by Jane Austen; novels brimming with long descriptive passages, overarching moral themes and a human message? If it’s not, and literature is simply at its basic form, words on a page, then where do we draw the line? We might want to be that liberal, but is anyone going to read the words “McDonald’s advert chosen for literary prize” and not think it’s a bit of a rubbish joke? The point there is left to argue: but Dylan? He’s one of the greats, isn’t he? Hum a few bars of ‘Blowin in the Wind’ or ‘Knocking on Heaven’s Door’ and you’ll probably get some response, even if it’s “oh yeah, heard that on some X Factor audition”.

There are however, two main standpoints that favour Dylan’s admission to the Nobel line up; the first being that everything written is literature, songs included, and the second, that high quality written work is literature and he can be considered on these grounds. Both are subjective in their own way, although the second will likely have a better consensus on what is literary genius and what is a catchy hook designed for the Top 40. The only disqualifier then, is simply that as a song, Dylan’s work cannot be considered literature under any circumstance. Add a few chords and that’s it all over. That hardly seems fair. Why do we consider classic literature to be exactly that? Beautiful prose, haunting couplets, plotlines that expand what we thought a genre could be or offer up new characters to be copied at varying success rates; why should all of these features be confined to a book? Aren’t songs just poetry set to music anyway? Dylan is certainly, at the very least, an artist to have left a lasting impact through his music. Countless others cite his work as inspiration, supposedly even Eminem. Clearly songs can and do have a profound impact on the time and generation they’re released in, whether they are throwbacks from the ’00s, or in Dylan’s case, related to the Vietnam War. A famous (and relevant) quote states that “art decorates space, music decorates time”. Dylan’s impact, courting controversy or not, is undoubtedly an ‘impact’ worthy of note and recognition. That’s certainly how the Nobel panel have seen it.

It may not be literature in quite the same way as Jane Austen or Charles Dickens, but if we mark out the boundaries too soon, we cut ourselves off from what these greats represented back in their day: progress. Why shouldn’t we recognise beautiful writing with more than just a Grammy? Maybe in twenty years ‘Work’ will be a literary classic of its own. Maybe it won’t. For now though, Dylan seems a good start.

Third year English and History student that will forever defend autumn as the best season.