Read more
You are at:Home»Features»Don’t Be Afraid: Celebrities Speak Out Following US Election
By Holly Hammond on November 14, 2016 Features

The world has been shaken in the wake of the 2016 American Presidential Election and discontent is rife across the United States; with university walk-outs, street protests, and petitions calling for legal action. There are even people hoping to impeach the new US President just a matter of days following the election results where it was revealed that the American people voted for Republican, Donald Trump, to be 45th President of the United States.

Celebrities, some of the most vocal in the run-up to the election, have spoken out in attempts to comfort and reassure the public. With so many people chiming in on one of the most controversial elections in history, I’ve collected the best, the brightest, and the most powerful of the responses to the President-Elect Trump.

Celebrities seem to be devoting themselves to standing for equality with Marvel’s Captain America actor, Chris Evans, tweeting out that there would be:

No more fear. Only hopeful optimism. I gonna let love be my guide. All my energy will now go towards protecting the rights of ALL Americans 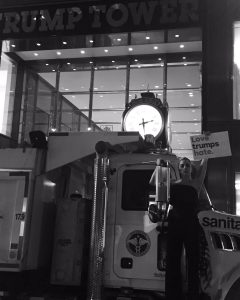 Lady Gaga took to Twitter within hours of the election with the simple statement:

This was accompanied by a picture of her one-woman protest outside Trump Tower.

Misha Collins was another of the more outspoken celebrities advocating for people to vote in the weeks before the election. Following what he considered to be a disappointing result, he sent out an emotional video urging that, “The political process is but one way to affect change. I am going to make movies that change minds. I am going to spread a message of love and kindness that is infectious and I am not going to give up. I love this country too much.”

In an open letter for Vice’s ‘Broadly’, Jennifer Lawrence expressed her confusion and dismay over the state of politics in America with her message, “We’re all allowed to be sad that the present isn’t what we thought it was. But we mustn’t be defeated.” She finished with an impassioned cry for the groups who have most come under fire in the Republican President-Elect’s campaign: “Do not let this defeat you—let this enrage you! Let it motivate you! Let this be the fire you didn’t have before. If you are an immigrant, if you are a person of color, if you are LGBTQ+, if you are a woman—don’t be afraid, be loud!”

Ellen DeGeneres also spoke out on Twitter commending Trump’s rival, Democratic candidate Hillary Clinton, for her bravery, saying “We are stronger together.”  She went on to add that:

There is so much good in this world. My job is to find it and to show it to you. I’m not giving up on that. 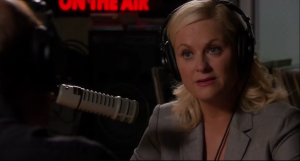 It is not just real celebrities consoling the public. Fictional character, Leslie Knope, from Parks and Recreation penned ‘A Letter to America From Leslie Knope, on Donald Trump’ where, after a long anecdote about a tortoise, cheetah, and a T. Rex, with a quote from Winston Churchill, she declared, “I reject out of hand the notion that we have thrown up our hands and succumbed to racism, xenophobia, misogyny, and crypto-fascism. I do not accept that. I reject that. I fight that. Today, and tomorrow, and every day until the next election, I reject and fight that story.” She went on to add: “He is the present, sadly, but he is not the future. You are the future. Your strength is a million times his. Your power is a billion times his. We will acknowledge this result, but we will not accept it. We will overcome it, and we will defeat it.”

Aaron Sorkin, Oscar-winning writer of The Social Network and The West Wing, also brought pen to paper, though this time it was a letter to his wife and daughter where he expressed his fear and disappointment that, at the election, “Hate was given hope.” He quickly adds that American people should “remember that we’re not alone.” He added: “We’re not powerless and we’re not voiceless. We don’t have majorities in the House or Senate but we do have representatives there.” Sorkin’s letter is all the more touching and powerful as he writes to his daughter, Roxy, of the what it means to be American: “America didn’t stop being America last night and we didn’t stop being Americans and here’s the thing about Americans: Our darkest days have always—always—been followed by our finest hours.”

Sorkin’s message is one that resonates with people all over the globe as they come to terms with what Donald Trump as President will mean for them. Letters, tweets and statements of hope and reassurance are coming from all over with the repeated message: “I am not alone, we are not alone”

Woke up feeling like I’d had a nightmare. Then started crying again. Mantra: I am not alone, we are not alone.

You can watch Saturday Night Live‘s Cold Open reaction below: