Read more
You are at:Home»Features»Are spin-offs spinning wildly out of control?
By Eleanor Joyce on October 16, 2016 Features

Reviewer Mike D’Angelo observed in 2015 that “If What We Do in the Shadows often plays more like a TV pilot than a movie, at least it would be kicking off a damn good show.” And so it might – Paranormal Event Response Unit (PERU) is a six-episode series announced in September that will follow hapless police officers Mike and Karen as they attempt to protect New Zealand from disturbances of a supernatural nature. Once again written and directed by Taika Waititi and Jemaine Clement, the series has been granted $1 million and promises to once again showcase the very best of Kiwi comedy – but could it be a victim of its own success? 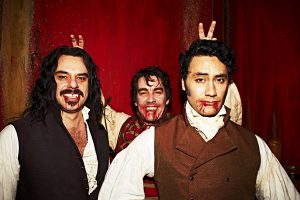 The tale of one of our earlier successful television spin-off begins in 1996, when the Coen Brothers’ Fargo opened in cinemas to critical and commercial acclaim. The dark comedy about an indebted car salesman who hires two criminals to kidnap his wife in return for a ransom from his father-in-law, was named as one of the greatest films of all time by the American Film Institute – and its ten-episode spin-off series of the same name premiered in 2014. It forms a common theme and chronology with the film, but stars an array of famous faces like Billy Bob Thornton, Martin Freeman and Kirsten Dunst as all-new characters in different locations to the Coen Brothers’ original; though as executive producers on the show, they approved the tone and feel of the series. It amassed fans from all over the globe during both its first and second seasons and achieved a total of eight Golden Globe Award nominations. Its popularity has been so great that creator Noah Hawley announced that Season three will air in 2017, starring Ewan McGregor and Carrie Coon.

Even films that flopped in cinemas have gone on to produce spin-offs that have gained more approval and acclaim than the original. Wet Hot American Summer, the 2001 ensemble comedy starring names like Paul Rudd, Amy Poehler and Bradley Cooper, received mostly negative reviews from critics and received a theatrical release in fewer than thirty cities in the USA. However, it became a bizarre cult classic and received an eight-episode prequel miniseries in 2015 called Wet Hot American Summer: First Day of Camp with the entirety of the original cast, which aired on Netflix to generally favourable reviews. A further series has been commissioned, Wet Hot American Summer: Ten Years Later, which follows the same characters in their older years.

Marvel has also bought into the spin-off craze by airing several new series based on, and expanding from, their hugely popular comic book films. Agents of S.H.I.E.L.D., Jessica Jones and Luke Cage are just a few of their recent successes, all of which have developed a huge fan base and often tie in with each other. With all the positive examples in the world, however, there are some film-to-TV adaptations by huge franchises that you may have heard of, but would prefer to forget.

Disney is particularly good at churning out spin-offs like there’s no tomorrow – The Lion Guard, Dumbo’s Circus and Buzz Lightyear of Star Command are just a few samples of the obligatory TV series where the plucky main character is enabled to save the day in new and exciting ways. Of course, PERU is worlds apart from the animated universe of Disney, but the warning is clear for the writers to quit while they’re ahead. Although a sequel is already in the works for What We Do in the Shadows (titled We’re Wolves, focusing on the werewolf population of Wellington), Waititi and Clement would do well to avoid the dreaded ‘sequelitis’ and only produce a spin-off that they truly feel is in step with the existing universe and retains the heart and humour of the original film.

Overall, the sheer charm of What We Do in the Shadows is its self-aware sitcom-style format, allowing the vampires to interact just like housemates at university, only with slightly more biting. In this writer’s opinion, this definitely lends itself superbly to a shorter, snappier style that can only be found in the world of television. Paranormal Event Response Unit has perhaps come at the perfect time – in a culture where Netflix makes television more accessible than ever, it can follow in the well-trodden footsteps of recent successes that have set the bar high for spin-offs everywhere.