Read more
You are at:Home»Features»Is it okay for white people to cover songs that were written for people of colour?
By Rehana Nurmahi on October 14, 2016 Features

Last Sunday (9th October), the London branch of the world acclaimed musical Hamilton tweeted a link to West End Actress, Carrie Hope Fletcher’s cover of ‘Burn’. It’s a cover that is professionally sung, showing off Fletcher’s incredible vocals which earned her the role of Eponine in Les Miserables at the Queen’s Theatre for 3 years running, and more recently the part of Truly Scrumptious in the UK tour of Chitty Chitty Bang Bang. As well as being a beautifully sung rendition, it oozes with emotion – you can tell that Fletcher is drawing on personal experiences, and means every single word she sings. However, she has now unlisted the cover on YouTube, and both her and the Hamilton account have had to apologise, because she received so much abuse from people who shamed her for singing a song written for a person of colour to perform. This begs the question – are there certain songs that it’s not appropriate to cover?

Since its birth, Hamilton has been celebrated for the diversity of its cast and the opportunities for roles that it offers for ethnic minorities. Lin-Manuel Miranda, its creator, has been famously quoted as describing the show as “telling a story about America then, that looks like America now” and this vision has seen fans the world over, especially people of colour, excited by something that feels frustratingly new in the Broadway world. Philippa Soo, who played the original Eliza, who sang the song in question here, is of Chinese descent, and others who have had the role since then have been of African American origins as well as Indian ancestry. This is why a lot of the Internet has got up in arms about the fact that Carrie Hope Fletcher, a white British female, has recorded a cover of it that the musical themselves have acknowledged.

I personally think that the backlash is unprecedented. I’m saying this as a fan of Fletcher yes, but I’m also saying it as someone who deeply respects the diverse vision of Hamilton, as well as being a person of colour myself. As Carrie, and others have pointed out, if she was trying to audition for the show, and take away these roles from the people of colour they were intended for, then of course, it would be completely unfair. However, that’s not what she was doing; instead she was just expressing herself through a song that actually had a lot of personal relevance to her. ‘Burn’ is a song with universal themes; it’s about being cheated on and betrayed, and this is something that Fletcher unfortunately had to go through rather publicly (much like Eliza Schuyler Hamilton did), a few years ago when her then boyfriend Alex Day’s infidelity and manipulation were made public knowledge. It makes a lot of sense that she connects with this song, and it makes a lot of sense that you can tell that she connects with this song when she sings it. 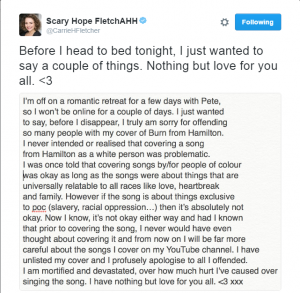 The thing that baffles me most, is the fact that she seems to have been specifically targeted by POC for this offense. However, when you search on YouTube for Hamilton covers, many of the ones you will find are sung by white people. Have all of these covers received the comments and abuse that Fletcher’s has? No, they haven’t! The tweet following Hamilton‘s post about Fletcher’s cover was actually a retweet from me, and it was a cover of the opening song of the musical by a good friend of mine. The friend I posted a video of was white, and neither he nor I received any abuse for that. The offense is technically the same, so why has Fletcher’s punishment been so much greater? Of course there’s the fact that many of the YouTube covers are younger people, therefore a lot less acceptable to criticise online, or maybe it’s just the fact that these people aren’t any of consequence as they aren’t on the public’s radar. This could be plausible. Although, this wouldn’t explain the fact that other high profile white YouTube based singers, such as Peter and Evynne Hollens, have been able to leave their covers up and escape relatively unscathed. Think of all the covers of ‘Reflection’ of Mulan that have appeared over the years – have these people been charged with the same offence? How about white couples recording covers of ‘A Whole New World’ from Aladdin? or ‘I Know Where I’ve Been’ (which actually is about specific POC experiences) from Hairspray? or the fact that Stevie Wonder was always covered on Glee by a white guy?

I’m curious to know whether this backlash is something that is specific to the experience of a white person singing songs by POC too. Would there be a similar situation if a straight person sang a love song written by a gay person? Probably. Is that because we as a society are becoming more easily offended, or because these are actually affecting the experiences of minorities?

I’m not saying that it’s okay to take these opportunities and songs away from the people for which they were intended. What I am saying is that surely the main thing we need to do here is to look at the purpose of covering songs. Recording a cover of a song gives you the opportunity to sing a song you wouldn’t get to sing otherwise. It’s singing a song because you love it, even when there’s no way that you would be cast in that show and given the opportunity to sing it otherwise. Covers are usually just a good bit of fun, too! I’ve previously covered Elvis Presley, Ed Sheeran and Taylor Swift among others. I can’t claim to have had the life experiences of any of these people, but that’s not a problem, because the whole point of a cover is that you’re allowed to sing it anyway. We shouldn’t be censoring creative expression. We cannot tell people that they do not connect with a song, because we cannot determine how other people feel and relate to the human experience.

I care so deeply about people like me, from ethnic minorities, being given the roles and chances that they deserve to have just as much as white people. I care deeply about the industry stopping ‘whitewashing’ and not eradicating the few roles that are actually there for us. I care deeply about diversity and the world on screens and on stages reflecting the one I see around me. However, I do not believe that a white person recording a song that was originally sung by a person of colour, but does not reflect the specific struggles of people of colour, to be in opposition with those beliefs.

The whole point of a cover is to sing songs that we can’t sing otherwise. Yes, be sensitive to other cultures. If the song isn’t universal in its themes, and details a specific ethnic group’s experience, probably don’t sing it. However, Hamilton is constantly and increasingly relevant, and I think we should all be able to enjoy that; whether we are White, Latinx, Black, Asian or otherwise.