As we welcome a horde of new students to the University of Southampton this week, we felt like it was a fitting time to reflect on the films about that pivotal time in our life: the teen-age. The High School Movie is a quintessential part of our culture, and does in fact shape the way in which we view every stage of the education system. Basically, as you start uni, this film genre is essential. 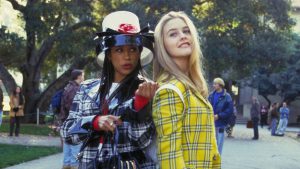 There are few films we can really label with the whole ‘timeless’ sticker. Silence of the Lambs, yes; Ghostbusters, definitely; Citizen Kane, without a doubt. But Clueless… well if I could marry a film, it’d probably be Clueless. And not just because of a super young, super fresh faced, super adorable Paul Rudd. Clueless is timeless because it’s just so relevant all of the time. Cher’s life may be expensive, but it’s not exclusive. And it perfectly captures what it’s like to be young, single, and free, without sugar coating it. Oh and the soundtrack – it has a banging soundtrack. It’s every girl’s high school experience in, more or less, a nutshell – minus the poking into teachers’ love lives and dating your step-brother. I think that might just be an American thing….

Frankly, to put together a list of the best films of this genre and not include this John Hughes classic would be a crime. The Breakfast Club, though simple in its narrative, has become a classic for good reason. I am yet to find a film that understands teenagers so holistically and completely as this film does. Following five misfits as they spend their Saturday in detention, the film is largely character driven, but I’d challenge you to find yourself unable to relate to at least one of the characters throughout the course of the film. With many of its iconic scenes being improvised, it’s clear that the young actors brought a lot of themselves to the part, and with that a sense of realness and authenticity. Everybody should watch this film, it understands teenage life better than you probably do.

The thing about school and uni is that they can be some of the best times of your life, but also some of the worst times as well. So in that respect, no film better encapsulates the experience of this period in life than The Perks of Being a Wallflower. When the film is at its highs, you’ll have a ton of fun with it and it’s ridiculously feel good. However when it hits its lows, you’ll feel all the sadness and despair that comes with it.

But above all, the characters all feel so real. They all have experiences and emotional reactions that you know you would have yourself. Logan Lerman’s character of Charlie is the biggest example of this; I always find myself identifying with his character so much. He’s introverted and shy, but then he feels exhilarated and alive when he’s with his friends – their acceptance means the world to him. But he isn’t always on top of the world, he falls on hard times and life gets incredibly difficult, and you feel every moment of it. His best friends Sam and Patrick are the same; they are lively and vivacious people who are struggling emotionally as well. The film is so fantastically well rounded that nothing can beat its unquestionable realism.

As a Film and English student, the plot and sentiments of Dead Poets Society touched my soul in the deepest and most intimate of ways. The film, which follows a group of repressed schoolboys as they are taught the beauty and meaning of poetry by an unorthodox teacher, is both tragic and inspiring all at once. In one of his most subtly poignant roles, the late Robin Williams preaches the wonders of poetry and the reaffirming verve that only language can give. One of the key aphorisms that the film centres on is ‘Carpe Diem.’ This sentiment, which inspires the central characters to take confidence and pursue their passions and lifelong dreams, is one that we should all aspire to live by. University is supposed to be the place where you truly grow into yourself and realise what it is you want to do and be. So in the words of John Keating (“O Captain, my Captain”); “Carpe Diem. Seize the day boys. Make your lives extraordinary.”

The film that gave Emma Stone her first leading role and chance to shine,  Easy A is most definitely one of my favourite teen films from the last decade. Following a teenager after a rumour of her losing her virginity is spread around school, the film is about rumours, slut-shaming and trying to live up to an image of yourself. It is not only hilarious, but actually rather thoughtful; it demonstrates the negative consequences of some of things we teenagers do so flippantly. As well as this, it boasts a wonderful cast, many the reference to 80s movies, and the pinnacle of #parentgoals in the form of Stanley Tucci and Patricia Clarkson. This film is a gem, and puts a smile on my face whenever I return to it.

“Dear Diary, my teen angst bullshit has a body count.” We may be rational, tolerant adults now, but it wasn’t too long ago that we were hormone-fuelled, angst-ridden teenagers – not too dissimilar from the characters in Heathers. This black comedy follows Veronica (Winona Ryder) – a girl who has worked herself into the ‘in crowd’ and is now desperate to get out. When she meets the new bad boy in town, J.D. (Christian Slater), Veronica finds herself embroiled in a plot that disposes of her enemies in the most permanent and gruesome of ways. The film touches on this angry, transitional stage of life with heaps or irony and dark humour, and perhaps the reason why it has evolved into such a cult classic is because, secretly, it’s a feeling we can all relate to. Oh, and J.D. is, like, a total babe.

Strictly speaking not set in either high school or university, it is as sure as hell where many kids around our age would have wanted to get a part time job. Empire Records follows a group of teens and twenty-somethings trying to navigate through a single day of perpetual angst, young love and misspent youth. No less poignant is it’s coming of age message, as it covers the nostalgia summoned by the eclectic bunch of people you share your school days with, many of whom you may never encounter again, moving in very different directions in life, but being a family none the less. While many of us in the story would mostly identify with Corey, the High School student destined for Harvard, many of us will have known and may still know an A.J, a Gina, and a Lucas back home. This message is about one single day that captures the not knowing, the fear, the sadness and the excitement of embarking on new adventures in life, but does not forget those you left behind.

An Edge favourite and placed on many lists across the website, such as our favourite Shakespeare adaptations; 10 Things is a classic 90s teen movie, of the same high calibre as Clueless. Probably the best retelling ever of Taming of the Shrew, this film is fun, moving and just so great. Heath Ledger and Julia Stiles are magnetic, and baby Joseph Gordon Levitt is an absolute wonder to behold. I remember watching this film so many times during GCSE English lessons, and even now, whenever it’s on tv, I can’t say no! That end poem as well… man… all the feels.

Of all the movies of the ‘High-School Movie’ genre, this is the one we all remember! Welcome to the catty world of the Mean Girls, as new-girl Cady joins the school’s band of ‘plastics’ led by Regina George, the ultimate popular-girl. In her own words, “I’m sorry that people are so jealous of me. But I can’t help it that I’m popular”. What follows is an hour and a half of pure backstabbing brilliance. Cady, originally sent to spy for her arty friends, pretends to become a plastic only to become embroiled in their world and soon enough, plotting against Regina after she takes her crush Aaron from her.  From stunts including giving her protein bars disguised as slimming bars, and turning her friends against her, Regina is ready to respond by publicly blaming her for the ‘Burn Book’. Mean Girls is essentially what we all remember high school being like (even if it never lived up to the epitome): several different clichés all against each other as they plot, scheme and battle for popularity. Thrown in to complete the picture is your stereotypical gay student whose “too gay to function”, a whole load of pink, and a Halloween Party where all the girls get to dress as sluts. It’s a perfect film for a bitchy night in with friends, and to reminisce about the easier life before exams at university. Ah the bliss!