Read more
You are at:Home»Features»The Top 10 best coming of age movies of the 21st century
By David Mitchell-Baker on September 14, 2016 Features

Whilst we may not be in the midst of the golden age of the coming of age movies as we were in the 1980s (The Breakfast Club, Stand By Me, Ferris Bueller’s Day Off to name just a few), the genre is still very much alive and in full swing. Case in point: Taika Waititi’s Hunt for the Wilderpeople and Ira Sachs’ Little Men, both set for UK release this month. In honour of this, I’m going to take a look back at the past 16 years and rank the top 10 coming of age movies of the 21 century so far. Please bear in mind that this is a subjective list and these are what I believe to be the best, so it may not reflect the opinion of everyone. 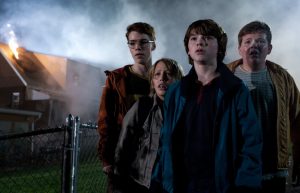 An homage to coming of age and Spielberg films of old, JJ Abrams’ super underrated (if you’ll pardon the pun) sci-fi mystery movie perfectly blended the two genres to create a riveting and endearing adventure movie. Set in the summer of 1979, Super 8 tells the story of a group of friends who witness a freak train crash when trying to film their own movie; the crash leading to a series of mysterious and unanswerable events which the friends try to investigate. The dynamic and chemistry between the lead group is fantastic and arguably one of the strongest elements of the film; Joel Courtney, Riley Griffiths and Ryan Lee all give excellent performances. Through this, the emotional development of the movie is heightened as we learn to love and connect with these characters and their stories. It’s as emotional as it is gripping, and the development of Courtney’s lead character is one of the finest arcs within a coming of age story in recent memory. 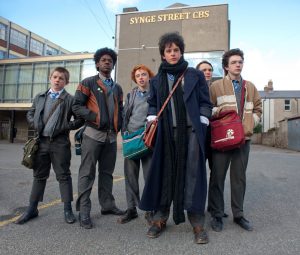 Image courtesy of The Weinstein Company.

The newest entry on this list and possibly the most fun, John Carney’s (Once, Begin Again) Sing Street is arguably the best film of 2016 so far. Set in Ireland in the 1980s, Sing Street is an uplifting and life affirming exploration of music, friendships, family and love. The plot centres around a boy who loves a girl and his quest to win her over by starting a band, but soon the band means a whole lot more to him and his new-found friends, all this happening just as his family starts to struggle and his love life gets complicated. Anchored by some fantastic lead performances (a common pattern in the best coming of age movies), irresistibly fun musical moments, and some heartfelt scenes, Sing Street truly earns its place on this list despite its youth.

8. The Kings of Summer, dir. by Jordan Vogt-Roberts

As much a suburban fantasy movie as it is a coming of age movie, The Kings of Summer is probably the one film on this list that you might not have even heard of. However it shouldn’t be written off; it’s a fantastic film. Starring Nick Robinson, Gabriel Basso and Moises Arias, The Kings of Summer tells the story of three teenagers who decided to quit their life at home and move into the woods and build a new home for themselves there. Together they must work to live, eat and survive, all whilst enjoying their new-found freedom and liberation from the confines of their old homes. You may recognize Nick Robinson from last summer’s Jurassic World where he played a rather by the numbers jerk older brother, but here he is charismatic, enigmatic and downright outstanding in the lead role as Joe Toy. The movie lives and breathes because of him and it’s a real career defining performance from him, but  this is not to discredit Basso and Arias – they are just as game and are equally fantastic alongside Robinson. A real hidden gem of a movie, do yourself a favour and track down a copy of this one – it’s a real treat.

7. Me and Earl and the Dying Girl, dir. by Alfonso Gomez-Rejon 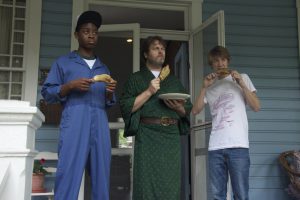 Another more recent entry, Me and Earl and the Dying Girl, based on Jesse Andrews’ novel of the same name, is a quirky, pop culture infused dramedy that is perfectly cast and extremely well written. Me and Earl and the Dying Girl centres around the story of high schooler Greg (Thomas Mann), who makes amateur parody films of classics with his ‘co-worker’ Earl (RJ Cyler). Upon learning that his classmate Rachel (Olivia Cooke) has contracted leukaemia, Greg’s mother (Connie Britton) forces him to spend time with Rachel and the two soon begin to bond and become friends. A friendship that goes deeper once Earl introduces Rachel to their amateur films and the duo are persuaded to make a film for her. The acting from the lead trio is stellar, the cinematography is Wes Anderson-esque, and the writing is smart and witty, it has all the makings of a great coming of age movie; what is there not to love about Me and Earl and the Dying Girl? 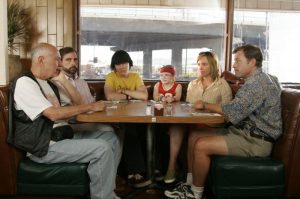 Little Miss Sunshine: the little indie that could. A low budgeted, original indie movie which made huge waves coming out of Sundance 2006 was soon purchased in a record deal, made over 12 times its budget at the box office and scored two Oscars from four nominations. Little Miss Sunshine was, and still is, one of the best and most significant independent films of all time. And it’s also one of the finest coming of age films of the century. The film tells the story of the Hoover family (Greg Kinnear, Toni Collette, Steve Carell, Alan Arkin, Paul Dano and Abigail Breslin), their mission to get little Olive (Breslin) to her beauty pageant in California, and their coming of age along the way. The casting is on point, and the writing is sublime. It’s dark, it’s touching, it’s emotional, it’s outrageous and it’s hilarious. 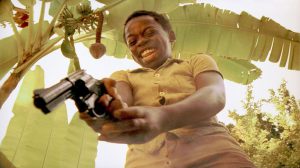 This couldn’t be further from the case with City of God, undoubtedly the most shocking, harrowing and sobering film on this list. In fact it’s likely to be one of the most shocking, harrowing and sobering films on any list of any categories of films ever. A stunningly directed and powerfully acted tale of the lives of the poor and underprivileged and how they will take any means necessary to escape from their limitations, City of God pulls back the curtain and shows Brazilian slum-life like no other. The contrasting paths of Rocket (Luis Otavio/Alexandre Rodrigues) and Li’l Ze/Dice (Douglas Silva/Leandro Firmino da Hora) are told in parallel; one seeks to escape the slums and become a photographer, and the other seeks to take it over and do onto others what others have done onto him. City of God shows us the dark side of society, status and humanity, it’s important and it’s damn terrifying.

4. The Perks of Being a Wallflower, dir. by Stephen Chbosky 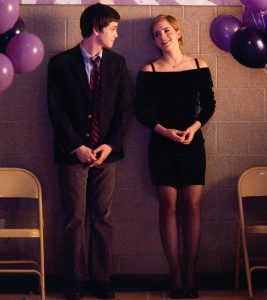 Whilst it may not top the list, The Perks of Being a Wallflower may just hold the claim for the best performance in a coming of age movie of the 21st century. I’m talking of course about the simply magnificent central performance from Logan Lerman as Charlie. Yes, yes… Ezra Miller and Emma Watson are both excellent, but I don’t think anyone saw Lerman’s performance coming. The young actor had often been written off as just another pretty face and wannabe franchise star, often filling cringy pretty boy roles where he could exhibit some charisma but it often fell flat. This was a total 180 from Lerman and it’s a performance that completely holds the film together. The arc of Lerman’s Charlie is one that has us completely hooked from the beginning; he’s a tragic, empathetic, yet endearing protagonist and I defy you not to feel an ounce of sadness during his scintillating “Stop crying” scene. You’ll know what I mean when you see it. On top of Charlie, the other characters are so wonderfully fleshed out and have their own stories and their own growth over the course of the film. No film this century has better portrayed the high school experience than The Perks of Being a Wallflower, and for that reason it deserves its high ranking.

3. Inside Out, dir. by Pete Docter 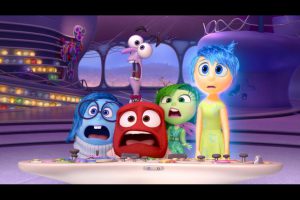 Inside Out is possibly Pixar’s most ambitious and daring movie yet. Talking toys? No problem, lets trilogy it. Monsters? Too easy. A trash cleaning robot? Pfft. Talking dogs? Simples. Actual emotions? Ummmm…

Yet they pulled it off, and did a damn good job. Such a good job that it’s probably one of Pixar’s best, as well as being one of the best reviewed films of the decade. Inside Out is so unique and different in comparison to everything else on this list, not only do we witness a child’s coming of age and their coming to grips with their own emotions, but actual emotions come of age. How the hell did Pixar pull this off?! The funniest and most heartfelt movie of 2015, Inside Out is also one of the very best. It taught audiences many a lesson, but most importantly it taught kids that you will feel sad at times and that that’s OK. We really need more films like Inside Out. 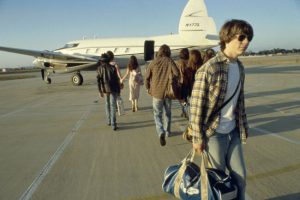 What makes Cameron Crowe’s Almost Famous so special is the backdrop it provides for this coming of age story. A teenager, William (Patrick Fugit), finds himself on tour with rock band Stillwater as a journalist for Rolling Stone, writing up a cover piece on the band. Along the way, William comes face to face with an adult world full of children, and heroes who aren’t all they shape up to be. Throughout the course of the movie, the world of 1970s rock & roll is explored, along with the lifestyles that went with this, making William’s coming of age that much more powerful as he soon becomes the most adult among them. William only wants to live out his dream as a music journalist and be among the stars, but he has such a heartbreaking struggle with this that his arc is made that much more gripping and empathetic. Fugit is great, as is Kate Hudson in a star making turn as groupie Penny Lane, and the rest of the ensemble are also excellent including the likes of Billy Crudup, Frances McDormand and Phillip Seymour Hoffman. Above all else, what makes Almost Famous so fantastic is that it’s vivacious, entertaining, powerful and alive. 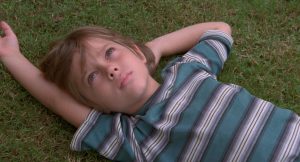 As powerful as City of God may be, as relatable as The Perks of Being a Wallflower may be, as unique as Inside Out may be, and as entertaining as Almost Famous may be, none of them can touch Boyhood. Not only is this the best coming of age movie of the 21st century, it’s arguably one of the best movies of all time. It’s an epic, pure and simple. The film tracks the life of Mason (Ellar Coltrane) from aged six to eighteen, along with his family and the cast of characters who float in and out of his life over the 12 years. The film was actually shot in real life, meaning that production began in 2002 and finished in 2013, filming took 45 days over these 12 years and was shot in a way that each year would be like a short film, before finally being edited together and released in 2014. The performances of Patricia Arquette and Ethan Hawke are magnificent, the writing is stellar and Richard Linklater’s direction and inherent vision is unmatched by anything I’ve ever seen. Boyhood explores life and humanity in a way that I don’t think any other film ever has or ever will.