Read more
You are at:Home»Features»Closer to The Edge: Books for the Beach
By Rehana Nurmahi, Tash Williamson, Sophie Trenear, David Mitchell-Baker and Sophie McEvoy on August 1, 2016 Features

As the summer rages on, and heatwaves come and go; herds of people are flocking to the beach. Some beach-goers like to swim in the sea, some like to work on their tan, and others like to curl up on their beach towel under a parasol and pull out a good book. To those inclined towards the latter, this week’s ‘Closer To The Edge’ will offer you some recommendations for your holiday.

The Hitchhiker’s Guide to the Galaxy by Douglas Adams

The greatest book in the universe, The Hitchhiker’s Guide to the Galaxy, is the only one you’ll actively need this summer for all your holiday travelling needs. As witty as it is cleverly spun, the first book in the series of five introduces you to Douglas Adams’ wonderful world, and the iconic characters that make up his universe. They are truly classics in their own right, although the silliness does become more of an issue as the series goes on – you have been warned. 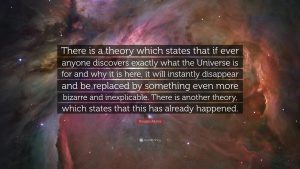 Nonetheless, his stories remain infinitely inventive, superbly told timeless odes to anyone and everyone who has ever looked up and wondered if there’s something more out there. Adams’ answer: a wonderfully ridiculous and messed up universe that proves we’re not alone and not bat shit crazy alone either, which is a warming thought.

It’s something short, light and hilarious to fill those poolside snoozes and wet weather blues, and if it’s raining, why not pop off to the restaurant at the end of the universe? There are plenty more planets in this cosmos that are more than just ‘mostly harmless’. Remember to pack a towel though – you know what happened last time.

The best-selling YA novel which has found its way onto many the school syllabus since its 1998 release, is a great choice for a satisfying, as well as quick and easy, read this summer. The heat of the current climate is matched by the setting of  Camp Greenlake, so as you sit in the sun and read, it is not hard to place yourself in the shoes of the characters.

The book follows Stanley Yelnats IV, a young man whose family is supposedly cursed, leading to his being sent to the detainment centre where they are forced to dig holes every single day. Alongside this, we get to read other stories that become significant to the central narrative; such as the tale of ‘Kissing Kate’ Barlow, and the journey of Elya Yelnats, the man on whom the curse was originally placed.

This book was original and fresh when it first came out, and continues to be so today. It’s fun and smart and you become invested in every plotline the narrative details. Also, you can probably read it in an afternoon; thus making it perfect to take to the beach with you!

The Girl With All The Gifts by Mike Carey

Last summer I was consumed with one book and one book only. An ex-boyfriend had given it to me the Christmas before and I hadn’t been at all bothered to pick it up until the inevitable summer of boredom hit. Y’know, the bit of summer after all the excitement and anticipation has faded away and you realise you have zero plans. So I picked up the nearest thing to me to keep me occupied; enter stage left – The Girl With All The Gifts. 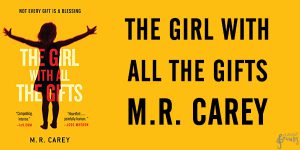 Several weeks later – don’t judge me, I’m a slow reader – and I turn the last, crisp page, breathing that last, heavy sigh of absolute finality that comes with reading a super amazing book. Because it was super amazing, and clever, and utterly captivating until the very last page. It tells the story of Melanie, a young girl (the very girl with all those gifts) who’s just that little bit different.

In fact, she’s really quite different – she’s a child “hungry”; fully grown “hungries” have been infected by a variation of the fungus Ophiocordyceps unilateralis and lose their mental powers, feeding on the flesh of healthy humans – in other words, zombies with some legitimate science behind them. Child “hungries” still retain their mental capacity but are subject to some pretty cannibalistic urges *sadface*. The camp where these pre-pubescent “hungries” are investigated and experimented on is, all of a sudden, bombarded with disaster (gasp) and a group of scientists and officers escape – with Melanie. Cue all things action, tension and drama.  A lovely mix, and, by far, an amazing book.

Paper Towns by John Green totally encapsulates what I want in a summer read. There’s intrigue and mystery, fun and relatable characters, great humour and a real enjoyable adventure at the heart of it. John Green has always written thoroughly enjoyable books, but, for me, Paper Towns has always stood as the most entertaining book of his back catalogue. Yes Looking For Alaska has the fantastic chemistry and dynamic between its central leads, and The Fault in Our Stars has the sheer emotional gravitas, but Paper Towns is just entertainment at its finest. It has the character dynamic akin to the aforementioned Looking For Alaska and the hilarity central to Will Grayson, Will Grayson, but as usual, Green makes these characters grow on you and by the end of it, you’ll be rooting for them and wanting to be a part of their gang. It teaches some good messages too; your dream girl may not be all you’ve made them out to be, love is not essential for happiness, and friendship is something that should never be underestimated or overlooked. I think it’s a fantastically well rounded book and perfect to delve into in your summer, you certainly won’t regret it! 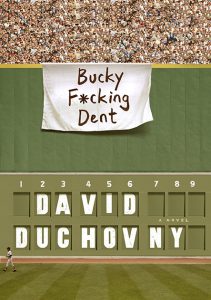 Having only written two books, David Duchovny is becoming one of the most distinctive voices in literature. His recent endeavor entitled Bucky F*cking Dent, is a book that you wouldn’t even be able to judge by its cover. And a book that I haven’t been able to put down all summer.

Its title is a reference to the prolific baseball player Bucky Dent, a shortstop for the New York Yankees in 1977 and 1978. He was also known as Bucky ‘Fucking’ Dent to supporters of the Boston Red Sox, as he most famously hit a home run in a tie-breaker game between the two teams in the 1978 season, earning him the prestigious title.

You’d think that Duchovny had written some sort of biography or account of Bucky’s venture that season; instead Duchovny uses this as a backdrop to highlight the relationship between father and son, the failings of an aspiring writer and the highs and lows of surviving middle age in 70s America. Duchovny’s wit and writing style is something to get used to, but if you’re familiar with his first book Holy Cow and the two episodes he wrote for The X-Files, this is a must read.

The Princess Bride by William Goldman

This classic children’s novel and its film adaptation have been a fundamental part of my life since I was a child, but are still such a fundamental part of it now. “Fencing, fighting, torture, revenge, giants, monsters, chases, escapes, true love, miracles”- The Princess Bride really does have it all.

A classic fairytale but with all the smarts, wit and fun of any truly brilliant novel; it is an essential read this summer if you’re yet to discover its brilliance. This book has traveled with me to Cornwall, Scotland, Italy, and pretty much any holiday I’ve ever gone on. It’s an absolute gem, and such an easy read (well easy if you don’t mind a copious amount of parentheses being used). The premise of the book is unique as well, as it’s set up as a book within a book; the classic tale by S. Morgenstern being ‘abridged’ by William Goldman. Truth be told, it took me more years than I’d care to admit to realise that S. Morgenstern was a figment of Goldman’s imagination- but I guess it’s at least a testament to the novel’s creativity!

As well as being unique in its form, the book’s dry wit makes for so many ridiculously brilliant quotes that will have you laughing out loud on the beach, and not even caring. Some of my favourites include: “There’s a shortage of perfect breasts in the world, it would be a pity to damage yours.” and “True love is the best thing in the world- except cough drops. Everybody knows that.” If those nuggets aren’t a good enough preview to encourage you to read this book, well… then I feel sad; because you really are missing out on a ‘classic tale of true love and high adventure’.

I’ll make a confession. I want to herald Stephen King’s self-declared ‘magnum opus’, The Dark Tower series, made of eight full books, as the best summer read you could ever come across in your lucky little lives, but alas, I haven’t even finished the first book The Gunslinger. 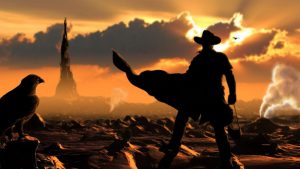 However, whilst I still have seven and a half more books in the series to go, it is clearly one of King’s best literary endeavours. Bringing together a mixture of genres including science fiction, dark fantasy, horror and even western, it delves deep into what it means to be alive and human in this, and various other, existences. It also draws together various characters and concepts existent in many other of King’s works, solidifying the idea that a great deal of his books are alive in the same universe. And I’ve gotta say, so far I am loving it.