In honour of National Dance Day, created by Nigel Lythgoe, the co-creator of So You Think You Can Dance and co-president of the Dizzy Feet Foundation, we take a look back and celebrate the best dance movies to have graced the big screen… 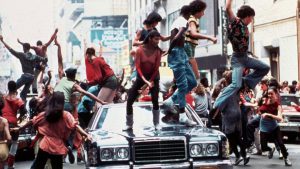 In this dance classic, men and women audition for spots at the New York High School of Performing Arts. The film tells a story of performance and dance,  but also highlights the realities of the industry. The characters must also deal with issues of abortion, suicide and homosexuality, and of course, heartbreak and rejection. This 80s classic has what is possibly one of the most recognisable soundtracks from the era- you won’t be able to keep your feet still!
Dirty Dancing (1987)
“Nobody puts baby in the corner!” Dirty Dancing is the true American dance classic.
Frances ‘Baby’ Houseman falls for bad boy Johnny, the resort’s dance instructor. Johnny (Patrick Swayze) and Baby (Jennifer Grey) pair up to become an unstoppable dance duo, performing in a holiday resort in New York’s Catskills Mountains. Dirty Dancing will be the reason you want to dance, and leaves every girl longing for her own Johnny. You really will have ‘the time of your life’ watching it. 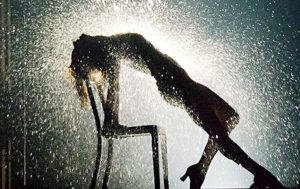 Flashdance (1983)
Flashdance is quintessential 80s. Welder/dancer Alex, (Jennifer Beals) has big dreams to join a ballet dance company. Self taught, she has an incredible passion and connection to the music she performs too. This girl shows that you don’t need to be from a certain background and have particular training to make it- you just need the passion and the determination. If you haven’t seen Flashdance, no doubt you’ve still seen dancing inspired by this film.

Saturday Night Fever (1977)
Brooklyn teenager Tony (John Travolta) is king of the dance floor, where he busts out his disco dance moves on Saturday nights. Struggling to find happiness at home or work, he notices Stephanie (Karen Lynn Gorney), whom he partners with to train to for the club’s dance competition. This film will give you a whole collection of classic dance moves to try out in the club.
Footloose (1984)
Kevin Bacon is smoking in this dance classic. Rebellious teenager Ren moves from Chicago to a small Midwestern town where dancing is illegal (sounds like a nightmare!). Only Ren has the courage to challenge the system and introduce music and dance back in time for the school dance. Bacon’s performance is electric and features some of the most original dance sequences in film. Let’s hear it for the boy! 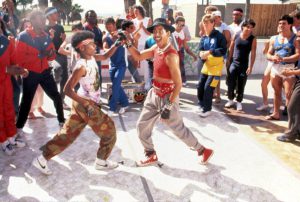 Breakin’ (1984)
You haven’t seen real break dancing until you’ve watched this film. A struggling jazz dancer Kelly (Lucina Dickey) meets the incredible break dancing duo of Ozone (Adolfo Quinones) and Turbo (Michael Chambers). The three decide to team up to break the tradition of only professional jazz dancers having a chance at going professional. With a poppin’ and massively nostalgic soundtrack, this film will give you an insight into the dance craze which took over the 80s.
Girls Just Want to Have Fun (1985)
New girl in town Janey (Sarah Jessica  Parker) makes friends with the crazy and fun loving Lynne (Helen Hunt) who both share a passion for dance. The pair jump at the chance when their favourite “Dance TV” programme is searching for a new dance couple. This is a truly uplifting and fun filled film with a bubbly, girly soundtrack which will leave you barely able to sit still.
Billy Elliot (2000)
Talented young Billy (Jamie Bell) falls in love with Ballet from the moment he sees it, but is held back by his unsupportive family which appears to be breaking apart. With a soundtrack and choreography to leave you inspired and uplifted, Billy Elliot shows that there are no limits to potential, and that your background won’t stop you from achieving success.
Share. Twitter Facebook Google+ Pinterest LinkedIn Tumblr Email