Exams are over, the sun is shining, everyone’s heading home; so what better thing is there to do but lock yourself inside and watch a movie or binge your favourite TV show? Here at The Edge, we love entertainment, and we’ll all be doing exactly that. Here’s what is on our summer watch-list this summer break- have a read to get to know our writers better, as well as find some inspiration for what to watch yourself!

Coming in under everyone’s radar back in 2013, Nat Faxon and Jim Rash’s Sundance hit The Way, Way Back is the perfect summer movie to both revisit or discover for the first time. 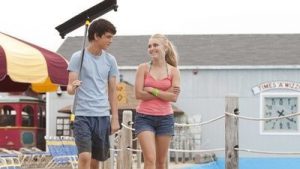 The film tells the story of 14 year old Duncan (Liam James), a mundane misfit, who is dragged out on summer vacation with his mum Pam (Toni Collette), her new boyfriend Trent (Steve Carell, in a terrifically douche-y turn) and his daughter Steph (Zoe Levin) to Trent’s beach house. His outlook on life starts to improve when he meets the local water park manager Owen (the MVP of the film, Sam Rockwell) who takes him under his wing and encourages him to come out of his shell.

For me, summer is about time off and having fun, but it’s also about finding yourself and your identity. The Way, Way Back is a fantastic blend of this. It’s a joyously uplifting film, laced with some heartfelt and touching moments, the performances across the board are excellent (including the hilarious, scene stealing Allison Janney as the boozy neighbour).

If you haven’t seen The Way, Way Back before then do yourself a favour and watch it this summer, I know I will be!

I know, I know, I’m late on the bandwagon with this one. I’ve always intended to watch Marvel and Netflix’s acclaimed series, Jessica Jones, for many reasons, but life, and you know, rewatching How I Met Your Mother for the fifth time in a year, has got in the way.

Jessica Jones is Marvel’s first ‘anything’ to feature a female lead, in the form of Krysten Ritter, who plays the eponymous hero. Jessica is a private detective with mutant abilities that include superhuman strength and limited flight, but she’s retired from the ‘superhero’ game after a haunting past. This is where my main reason for wanting to catch Jessica Jones comes in, as the brilliant David Tennant plays her sparring partner, the chilling Kilgrave, a villain that instantly surpasses any threat seen in Marvel films. Due to it premiering on Netflix, Jessica Jones is far darker than most superhero shows/films, and is made all the better for it. I caught the first two episodes earlier in the year, but I look forward to being able to get my teeth into it over the summer.

I promise, I won’t get distracted by HIMYM again. Probably. Who am I kidding?

It’s taken about as long as possible for Jennifer Saunders’ fabulous pièce de résistance to come to fruition, but Absolutely Fabulous is finally coming to the big screen this July. Originating from a small sketch in 1990 on the French and Saunders Show, the show spent a total of twenty years gracing our television screens, starring Saunders herself as the heavy drinking, drug abusing career women Edina Monsoon and Joanna Lumley as her partner in crime, Patsy, whose own exploitation of sex, drugs and rock n’ roll far eclipses Eddy’s own. And after five years of speculation, rumours and ambiguity, the celebrated ‘Eddy and Patsy Show’ has finally got a release date for the cinema. 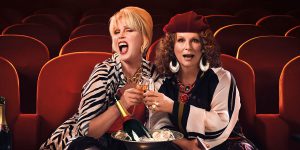 The film, this summer’s most anticipated team-up this side of Suicide Squad, sees the pair, in attempt to secure her for Eddy’s PR department, find themselves in a bit of a pickle which may or may not involve killing supermodel Kate Moss before fleeing to the South of France where “everyone’s a criminal here, darling”. Cue a multitude of blunders! Action! Celebrity cameos!

The pair claw their way back onto the modern fashion scene, and our screens, on July 1st and sweetie, darling, sweetheart – it’s going to be fabulous.

Okay, so I know that I’ve already watched this film twice since it was added to Netflix UK (which admittedly was only a few weeks ago), but for me, as well as being a childhood favourite- The Road to El Dorado is the perfect Summer movie. I mean, it is essentially a buddy road trip film, and don’t those just epitomise the summer season?

The story follows two Spanish con-men, Tulio and Miguel, voiced by the ever-talented Kevin Kline and Kenneth Branagh; as they venture on a search for the lost city of gold- El Dorado. The film hosts a wonderful array of colourful characters, all of whom have such incredible dynamics, especially the two leads. This could be due to the fact that in the initial script the pair were written as gay lovers. Although the world apparently wasn’t quite ready for that sixteen years ago; the subsequent film that was made is still an absolute treasure, and one that I will never understand how it flopped at the box office.

As well as it being a wonder to look at and an absolute dream to quote, the film is also accompanied by an amazing soundtrack written by Elton John, which makes for perfect listening on a hot summer day. This film is an animated classic, and one that I will definitely be watching again and again this holiday.

It may be a little late in the game, but all of the volumes of Skins are available to watch on Netflix. It’s one of those rare British gems about being a teenager, being in love and being at school that I never received an initiation in. Starring the new generation of British talent, from Nicholas Hoult to Dev Patel, this series is no mere high school musical. These age appropriate actors are thoroughly believable; we experience all the angst, ugliness, love and heartbreak that comes with being a teenager through honest portrayals by teenagers themselves.

Notoriously secretive, you receive an intimate perspective of one teen’s life per episode, and can witness the heartbreaking effect of the failures of people in their lives, but their ability to bounce back and pick themselves up. Most recently, Chris’ (Joe Dempsie) episode really kicked me in the feels, a beautiful and bittersweet cyclical narrative that ends in much the same way it begins. For this episode alone, it’s worth a watch.

You know life is probably going to get better for them, and for him, but right now, it’s all they have and it’s all he knows.

Really, the main piece of TV anyone should be looking forward to this summer is the return of Robot Wars to the BBC. It is a show with a simple premise- build a robot, send it into The Arena and watch in horror as your beloved creation is smashed to pieces by the mechanical menaces that are The House Robots. (For record, my favourites are Sergeant Bash and Sir Kill-a-lot).

Although; we won’t quite get the entire original package- presenter Craig Charles has chosen to forfeit his position to Dara O’Briain and Angela Scanlon which is somewhat disappointing. However, Jonathon Pearce of Match of the Day fame is once again lending his expert commentary skills to the show. Robot Wars is so watchable because it is pure adrenaline-fuelled robotic violence. What more could you want? The battles are unpredictable, and can change each moment, making every episode unique. What’s more, bigger and stronger doesn’t necessarily mean better. The BBC have already tried to reboot a few shows recently, with varying success, but surely even they can’t get Robot Wars wrong… right?

Over the summer I plan to catch up on the various super hero movies which I have never seen before. Although I haven’t always been a big fan of super hero movies, within the past few years, I have watched the newer releases and have come to love them. I watched the first two Captain Americas just before Avengers: Age of Ultron came out and it definitely made me enjoy Avengers more having understood the backstory of one of the characters. The first Iron Man is the only other marvel movie I have watched which is linked to the Avengers. For this reason, this summer I plan to watch: Thor, Thor: The Dark World and Iron Man 3.

I have also never watched any of Fox’s Marvel films, (which I am ashamed to say!), so other films I am going to watch include: X-Men First Class, Days of Future Past, X-Men Apocalypse, and possibly the Wolverine films and perhaps the earlier X-Men titles. To finish it off I still need to watch the critically a claimed Deadpool! The reason I am using summer to watch these films is because there are so many of them, and they are perfect for a summer movie marathon!