Read more
You are at:Home»Features»Barney Stinson sayings which scarily make sense
By James Barker on May 19, 2016 Features

He’s legend – wait for it – dary, but would you really take advice from Barney Stinson? Now, your first reaction may be: “God no, what are you thinking, do you want to die alone?” But hang on for one moment – if you actually listen to the advice at the heart of what he’s saying, and ignore the fact he’s usually saying these things while trying to pick up chicks, there’s a certain amount of wisdom in there. Find seven pieces of Barney Stinson wisdom that make surprising sense? Challenge accepted.

‘When I’m sad, I stop being sad, and be awesome instead.’

Life doesn’t always deal you the hand you want, but there’s no point moping about. Get yourself out there, surround yourself in your Bros, do something wild and create a story you’ll be proud/embarrassed to tell your kids one day.

‘The future is scary. But you can’t run back to the past just because it’s familiar. Yes it’s tempting – but it’s a mistake.’

You may have caught me out – this one wasn’t just Barney, but him and Robin, trying to convince Ted that reuniting with one of his exes (Stella? Zoey? Victoria? I lost count) is a big mistake. Reuniting with someone you’ve broke up with, or trying to recreate the past in any way for that matter, is usually a doomed affair – no matter how good those times were, the past is the past and often the future will be much more complicated. The next big thing could be right around the corner. Which brings me on to my next quote…

Now, this one’s quite flawed. New definitely isn’t always better – Barney himself even proves this wrong by going back to Robin and marrying her. However, he does have a point, in that it’s far better to live your life in the moment, looking forward to the next big adventure, than clinging onto the past. And everyone loves new stuff. 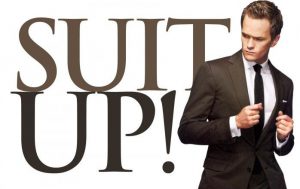 Nothing suits you like a suit [Image from wonderfulengineering.com]

Come on, everyone looks great ‘suited up’, whether it be in an actual suit boys, or a glamorous dress girls. Just look at the university balls – they are basically the same as every other great party, but made 100x better by the fact everyone looks legendary.

‘Ahh tweed, the official fabric of the eunuch.’

‘You have to wait three days to call a woman. That’s the rule!’

You don’t want to come across too keen when it comes to calling/texting that girl you met at your favourite bar, no matter how great they were. Barney uses an ingenious metaphor to convince Ted to wait three days to call a girl he likes, pointing out the three day rule actually goes back to Jesus, who waited three days to rise from the dead. One day: nobody would have realised he was gone, two days: he would have had to rise on Saturday when everyone is busy – but three days is the perfect time. Jesus had quite the crew of bros too – that last supper looked like a wild night which Barney would have fitted in with well.

‘Nothing’s legendary without your friends there to see it.’

This is my favourite Barney quote – and possibly my favourite HIMYM quote altogether. It’s his parting piece of advice to his protegees when he retires from ‘the game’ in the final season. Think back to the best nights of your life, and I can almost guarantee they were what they were because of the people you spent them with.

Surround yourself with your own gang of friends – like Ted, Robin, Lily and Marshall – and the legendary stuff will come naturally.