Read more
You are at:Home»Features»Teenagers aren’t stupid; and neither is their literature
By Rehana Nurmahi on March 20, 2016 Features

Let me tell you a story, kids – so a couple of years ago now; I entered a very intense argument. I was told by someone that as a person who cared about literature, and someone who was planning to go on and read English at university, it was something of a travesty that many of my favourite books came into the category known as YA Lit. For those of you who aren’t down with the lingo – Young Adult Literature.

I was made rather angry by this statement. Yes, I acknowledge that in terms of writing, admittedly novels written for younger audiences probably don’t reach the heights of classic novelists such as Tolstoy or Dickens or Austen. However, I refuse to believe that just because these books are written for young adults; that implies that they have no cultural value.

I do think that H 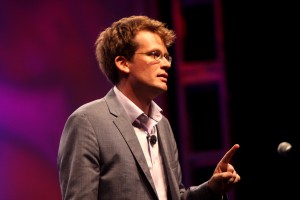 ollywood needs to calm it with the adaptations, (I still haven’t forgiven the producers of the Divergent movie) but I think that the recent popularisation of young adult literature in our culture says a lot about the society we live in. As John Green, one of the kings of the genre says, “Maybe our favourite quotations say more about us than the stories and people that we’re quoting.”

So if the world seems to be quoting more and more YA fiction, then surely that suggests that there is an inherent need for it right now. There is something about these stories that not just enthral us, but connect us with our humanity. I think that there are so many lessons we can learn from these books, lessons that maybe can only be taught because these books are aimed at a younger audience.

I mean, look at the response to the print release of the script to Harry Potter and the Cursed Child. There are children, teenagers and adults already all jumping up and down for joy- and there seems to be no shame about that love, even if Harry Potter was originally intended as a series of children’s books. However, the messages of the novels are universal, no matter what age you are. Just think: how different the series would have been if it was written for a completely different audience? They’re dark enough as it is, would they have been darker? Would the messages of hope that always seem to be prevalent in stories of the genre not be there?

I think another thing that makes YA stories so accessible, is that fact that in having a young protagonist, there is more space to show imperfections. Young people haven’t experienced the world as fully as adults; they’re allowed to make mistakes, and that’s refreshing! A good protagonist should never be perfect, and I guess that in detailing these narratives about growing up and learning, readers can look at ways in which they need to grow and learn, and adult readers can reflect on the ways in which they already have.

A Ferguson monument vandalised with a quote from Suzanne Collins’ Mockingjay.

YA Lit is redefining the way we see heroes in general, especially from a feminist standpoint. We have the Katniss Everdeens, and the Beatrice Priors and Hermione Grangers: young women with integrity who are such interesting and complex female characters for young girls to be reading about.

Of course, there’ll always be Bella Swans too, and the Team Peeta vs Team Gale questions, and the completely overused quotations about thoughts and constellations- but to reduce YA Literature to just those elements, well in my opinion, is completely unfair. The Hunger Games has been a symbol of rising up against oppression, quotes from it even being painted on walls during recent riots. Paper Towns illustrates the dangers of falling in love with the idea of a person without attempting to get to know them deeper. Eleanor & Park shows what life is like for minorities, and how the smallest of things can bring us together.

Young Adult fiction is great because at its heart it just wants to tell human stories. Stories that encourage growth and development, and that encourage us to reflect on our position in society. Although I agree that limiting yourself only to YA literature isn’t a wise idea; I do think that it should be considered just a different genre rather than an inferior one. I only have 2 years left of being a teenager, but I think that I’ll still be picking up books from the teen shelf for quite a while.