Read more
You are at:Home»Culture»Theatre»Review: Showstoppers’ Little Women @ The Annex
By Chloe Wade on June 20, 2022 Theatre

Amongst dissertation and assignment stress, and of course covid, I, unfortunately, haven’t had the time to see any shows by Showstoppers in the past three years despite being a huge fan of theatre. In fact, only this week have I been able to get involved in Theatre Group myself! As a result, I was so excited and jumped at the opportunity to review Little Women at The Annex. Little Women is the first Showstoppers performance I have had the pleasure of seeing and it did not disappoint!

Based on the renowned novel by Louisa May Alcott, the musical rendition of the tale of four sisters was an emotional and powerful journey through their lives, following Jo’s pursuit of writing and the heartbreaking realities of growing up. I was familiar with the story, but completely new to the musical – I had no idea what to expect. Needless to say, the performance surpassed all my expectations. Niamh Grimes’ directing of the show, despite this being her first time directing for Showstoppers, was artfully done, and it was difficult to take your eyes off the stage. I was amazed by the professionalism! 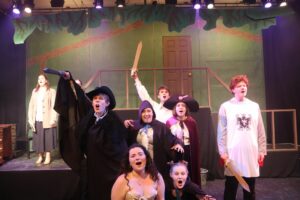 The four March sisters, played by Millie Edwards (Jo), Lizzy Monds (Beth), Alicia Holland Pillado (Meg) and Hermione Lester (Amy) are perfectly cast, and you can really feel the love the sisters, and actresses, have for each other onstage. Their harmonies together are absolutely breath-taking and, more often than not, I had goosebumps! I was captivated by their voices and, from the standing ovations and generous applause they received, I was clearly not the only one. I’m not one to get emotional at musicals, but the astonishing ballads did choke me up, especially Emily Young’s rendition of ‘Days of Plenty’ which really almost got a tear out of me (believe me, that is an achievement!). Emily’s warmth as Marmee dominated the stage every time she appeared, and I think everyone just wanted to give her a huge hug! A special mention has to go to India Browning whose facial expressions of disgust and sarcastic quips as Aunt March really brought out the comedy in the production!

And it wasn’t just the ladies! The male actors, Will Bartlett (Laurie), James Taylor (Professor Bhaer), Patrick Riley (John Brooke) and Tom Rolph (Mr Lawrence) were equally incredible and charismatic in their roles. Of course, their singing voices were unfaultable, but their dialogue and expression of character were exceptionally strong throughout the show. I especially enjoyed the fight scene between Will and John as it brought a different dynamic to the stage. 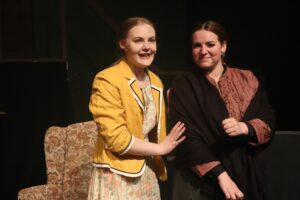 Costuming was impeccable and I absolutely adored the clever use of set in this production. Just a few simple staging props – a bench, a desk, a sofa and a change in lighting – transformed the stage into completely different locations. I was especially blown away by the staging in ‘Volcano Weekly Press’ and ‘Some Things Are Meant To Be’; the image of the kite flying offstage was incredibly emotional, and, well, the forest sequence has to be seen to be believed! The whole backstage crew – including the stage managers, sound and lighting teams, and technical directors – deserve so much appreciation because their actions really did bring the entire show together.

Of course, my review of this musical would not be complete without expressing my true wonderment at the music in Little Women. I was aware that the music team was actually missing a few people that night, but by no means did it affect the quality of the show and the music. The seven-piece pit band was, in simple terms, incredible and expertly led by conductor and musical director Rosie Young. There was a good mix of fun, bouncy melodies and the slower, powerful ballads – music for anyone to appreciate. Even during the intervals, hearing the music was uplifting and enjoyable.

Really, all I have to say is… I loved it. I have been raving about Little Women all day. Even during the interval, I was in shock at just how incredible the show was. And I sincerely hope that one day, maybe when visiting my friends in Southampton, I will be able to return and have the privilege of watching another Showstoppers performance.