Enticing horror fuelled by a few great performances can't help but struggle to realise its potential and make ground in a truly remarkable way.

The original tale of Washing Irving’s The Legend of Sleepy Hollow (1819) has long caught the imagination of writers, directors and audiences alike for two centuries. As source material with no concrete interpretation, Philip Meeks’ rendition of The Legend of Sleepy Hollow both embellishes in the supernatural qualities of the original story and exploits its grey areas to find new meaning. What comes about is a sometimes smart rendition of an already great story, that stumbles and fumbles in how it tells it. So while this version of the story may never hold the status of “legend” as it holds in its name, it’s a perfectly compelling show that deserves at least one watch. 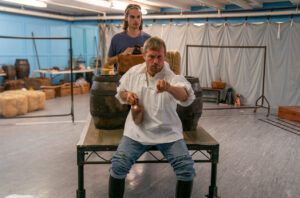 Telling the story of the stranger, Ichabod Crane, who arrives at the settlement of Sleepy Hollow, the show depicts a backdrop of a gruesome legend that haunts the town’s past of the one and only, Headless Horseman. Yet when Crane finds himself competing for the hand of Katrina Van Tassel against Abraham “Bron” Van Brunt, the story we think we know quickly turns into an uncanny tale, unlike anything I expected. Without spoiling its changes to the plot, Meeks’ story feels more modern, if somewhat occasionally haphazard. While I respected the new nuances it exploits in the older tale, and the attempt to bring an added depth, it sadly can’t help but linger with the lurking “hollow” that exists in the tale’s name. What could have worked, and certainly captured some imagination, flounders in the writing’s execution with character development that happens too quick.

I guess quickness, like the haste of the headless horsemen himself, is the play’s undoing at times. The first half an hour tries too desperately to jump us into the story of Icabod Crane that it lacks any sense of clarity. While one could argue ambiguity is one of the charms of horror, in this case, it was a weakened crux. Constant scene changes, actors doing what felt like a weird amalgamation of interpretive dance and melodrama, and a narrative that jumps around with no care of giving its story time to breathe sadly sets up its main plot in a hard to follow tangle of stories. This version of the legend thrives off the idea of “stories” and how they connect, using a non-linear structure to build to an admittedly spectacular climax. It’s just a shame that so much of the narrative gets lost in its time-jumps and storytelling, embellishing in ambiguity a bit too much.

However, I still find myself charmed by The Legend of the Sleepy Hollow because there are elements that work so well. Set design and lighting are almost always on point, and with the hazy smoke, and chilling mixtures of cold colours, there is always the perfect atmosphere for the play’s most chilling moments. Nothing feels gimmicky in those respects (even if the acting sometimes can), and for a “smaller” production, it undeniably has one of the most brilliant realised set and set pieces, all built around the various ways in which something unnerving may happen. In fact, the sheer amount of stylistic elements it juggles (illusions, trickery, shadow play and more), all attest to Jake Smith’s artistic direction. Smith seems perfectly at home creating a haunting visual tale, and nothing visually left me anything but in awe. 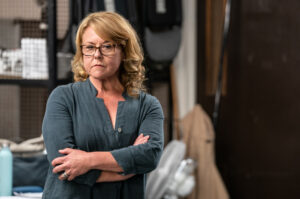 I think then turning our attention to the actors who bring the horror to life is always the most important part of any show. Thankfully, most of the performances had something to celebrate, however, Wendi Peters is undeniably the champion of this legend. Charismatic at times, haunting at others, and always ready to cut then tension with a well-delivered joke, Peters both dials up the creepy aesthetic of the show and delivers her multiple characters with perfection. Lewis Cope is yet another excellent addition to the show, whose performance is only let down by the writing of his character. Yet Cope thrives with talent and adds a compelling complexity to Bron as a character, as well as a surprising if sometimes unsettling suave sexiness to the character. Rose Quentin as Katrina is probably the weakest of the cast, but her performance does pick up in the second half when her character gains a more complex and enticing dimension.

While The Legend of Sleepy Hollow bumbles around at times and fails to reach true heights, it certainly never stopped me from being interested. It’s compelling, its horror is smart, and the visuals and trickery are too much not to be enticed by. While it may be a pale imitation of the greatest of previous adaptations, it achieves something good in its own right. Watch it – enjoy it for yourself because there is enjoyment to be had at this Halloween horror.

The Legend of Sleepy Hollow is playing at MAST Mayflower Studios between the 12th-16th of September 2021. Find out more here.