Covers can make or break a book. It’s often the first impression of a book, it can suggest the book’s genre, plot line, characters and audience. Our writers discussed some of their favourite book covers and why they love them.

Harry Potter and the Goblet of Fire, J. K. Rowling

Dragons and book covers are like cheese and crackers. From The Hobbit to How to Train Your Dragon, these scaly beasts have adorned the front of fantasy novels for decades. When bookcovers are mentioned it is impossible for the original artwork on Harry Potter and the Goblet of Fire not to be conjured up. Using the first Triwizard Tournament task for inspiration, the still shows the slender frame of the satanic Hungarian Horntail (“what’s that boy?”) sending a gobful of flame towards Harry who, creating a tidy right angle between the fire and his trajectory, is zooming into the foreground on his Firebolt with the golden egg, like the Snitch, just out of arm’s reach. It’s the mightiest of the Harry Potter covers when it comes to action and excitement; serving up the ‘fire’ from the title to match the deep red of the title section.

Furthermore, the cover’s fearsome aesthetic also has the sentimental value of being the largest book I had read at that point, and the immense width of JK Rowling’s novel seemed as daunting as a Triwizard task in and of itself. The book isn’t half bad either. 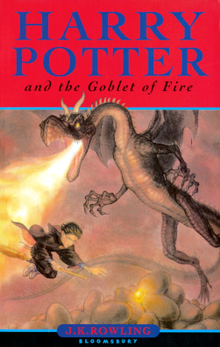 Rowling’s Harry Potter and the Goblet of Fire cover, via Giles Greenfield

The Song of Achilles, Madeleine Miller

Covers of Madeleine Miller’s first novel The Song of Achilles have ranged from everything to plain to utterly gorgeous, depending on the edition. I’ve owned two different editions of the book, but it is perhaps my newest copy, the 2017 Bloomsbury Modern Classics edition, that is my favourite; to the extent that I searched for days to find a version with that cover rather than the original bronze helmet design.

There is a simplicity of a white bow and single blood-tipped arrow drawn in the shape of a heart on blue that is printed upon the cover that perfectly encapsulates everything within the novel. The love between Iliad heroes Achilles and Patroclus, and everything that comes later. In a visual form, love hurts, and will hurt, as beautiful as the story is as it flourishes. With the cover uncrowded it just draws the eye in a way that Miller’s next novel Circe doesn’t quite match. Less is more. Leave the detail for the stunning descriptions on the pages inside. 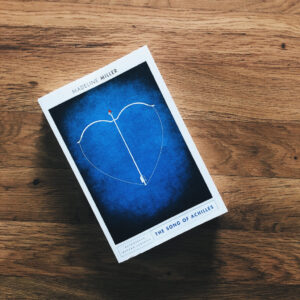 Miller’s The Song of Achilles cover, via crazybookladyreviews