A brooding and solemn tone elevate War For Cybertron over other animated kids’ shows, setting itself up to be the rejuvenated saviour of the Transformers brand - even if its animated format holds it back from greatness.

On average, a live-action Transformers film makes $807 million worldwide and receives a 4.7/10 Rotten Tomatoes score (or a 39% rating). It is one of the most enduringly critic-proof franchises, capable of selling millions of tickets despite a serious kicking in newspapers’ review sections. This has elevated the series into notoriety whereby its new additions are ridiculed even before release. Enter Netflix’s Transformers: War For Cybertron. Hoping to break the stigma around the brand name, the show has two things working in its favour to help separate it from its scrutinised brethren: it is animated, and it is a television series. And Michael Bay is not involved, so three things. This first batch of six episodes form chapter 1, titled Siege, in what will hopefully be a 3-chapter show.

Set exclusively on the Transformers’ home planet Cybertron, here depicted as a dystopian battlefield populated by either soldiers or scavengers, the story introduces the central conflict between noble Autobot leader Optimus Prime and the totalitarian Decepticon leader Megatron, who rules over the planet with fear and propaganda. The show has strong similarity with Star Wars: The Clone Wars in that it takes an integral part of its universe’s history and, using the storytelling privileges that television series can have, inspects a ‘good vs. evil’ war with a more revisionist lens. The results make for a relatively compelling sextet of episodes that look at characters on both sides of the fray. Allegiances are questioned, troubling backstories are alluded to and honour is tested.

A positively dour tone is established from the offset as an Autobot and scavenger stealthily seek out the invaluable resource energon. The animation paints the screen in lashes of greys and dark blues (with primary colours saved for the Autobots) and sunshine is hard to come by in any of the episodes. Darkness also creeps into the story through its sometimes harsh presentation of war: there are shots of dead Autobots impaled on spears, prisoners of war are tortured and shot and there is even a dialogue scene which alludes to the war’s existence stemming from class-based tensions. The tone is not unrelentingly grim, but a few moments of levity or banter would be very welcome.

Admittedly, Michael Bay’s Transformers films set a high bar for robot-on-robot fisticuffs, utilising occasionally vicious weaponry and executing many a coup de grace that would appal censors were they on humans. In animated form the Cybertronian action is far less entertaining, reduced to back and forth shooting as opposed to the glory days of 2011 when Optimus Prime would use axes, knuckledusters and his enemies’ own weapons against them. Another limitation of the animated medium is that, for sustained conversations among the characters, there is a lack of emotional expression on the robotic faces. Wooden body language and the clunky look of some of the characters also make the show feel plodding at times, whilst there is a lot emptiness in some of the backgrounds. Whether these problems are attributed to the style or the budget is hard to tell. 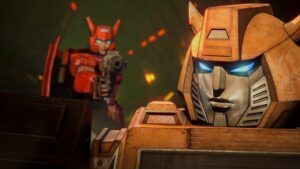 The voice cast are all adequate; Jake Foushee gets the hardest gig in filling the shoes of Peter Cullen’s legendary Optimus Prime, but, after adjusting to a new voice, he moves away from impressionism to mould his own version of the character. It is Optimus and Megatron who get the bulk of the screen time but there are also compelling supporting characters; in particular Jetfire, a Decepticon with a moral compass; the ever-obsequious yet self-interested Starscream (here resembling something close to the Decepticon Luftwaffe) and the unaligned Ratchet make up the standouts of the ensemble.

For enduring Transformers fans this show will be more than satisfactory due to its investigative depth of the political machinations of the titular war, as well as its faithfulness to its characters. For first-time viewers however, there are a lot of unanswered questions, and its action will feel underwhelming given what audiences have come to expect from a Transformers story.

Siege, War For Cybertron‘s first chapter, is available to stream on Netflix now.