Read more
You are at:Home»Culture»The Purpose and Rules Behind Imagist Poetry
By Elizabeth Sorrell on August 2, 2020 Culture, Literature

Have you ever wondered what the bridge was between traditional Victorian poetry and modernist poetry? I know you said no. But here I am, so we’re going to talk about Imagism. Imagism as a poetical tradition has paved the way for modern and postmodern poetry in the same way that we can thank the fauvists for artistic movements like modernism and expressivism. The ‘school of images’ which was led principally by American poets such as Ezra Pound, Amy Lowell, H.D. (Hilda DooLittle), John Gould Fletcher, and William Carlos Williams. This movement later jumped across the pond when English poets such as D.H. Lawrence and F.S. Flint followed suit.

This tradition has faded into obscurity in terms of popular knowledge about 20th century English poetry, but it is hard to overemphasise how integral Imagism’s influence has been on some of our most beloved poets such as T.S. Eliot, Marianne Moore, James Joyce, and E.E. Cummings.

So what is Imagism? Luckily, Ezra Pound and F.S. Flint were kind enough to outline three main rules of the tradition in their respective manifestos A Few Don’ts by an Imagiste and Imagisme:

In other words, Imagism rebelled against late 19th-century verse that conformed religiously to rigid meters, laced with metaphors that served no other purpose than ornamentation. If you feel the same primal rage that I feel when the moon is brought up in a poem with very little purpose and then dropped again, you should be smiling at your screen at this concept. It didn’t throw images (the moon, fruit, and the sea as common examples) into the poem without a specific purpose to the poem. Imagist poetry was often short, free-verse poems without much of a rhyme scheme if one was present at all.

Imagism was also inspired by a diverse range of poetry such as Chinese and Japanese poetry (including haikus), Greek and Hebrew poetry, and French anti-symbolism. It also drew inspiration from visual art forms such as Futurism and Vorticism. As the industrialisation of the military and the wider economy was inescapable, why constrain yourself to restrictive poetical conventions like a spinster waiting for spinning wheels to make a comeback?

Some of my favourite poems are very short but are remarkably poignant; when every image is supposed to be a potent element to the meaning of the poem, each metaphor impacted me with the full weight that was intended. Take Skipwith Cannell’s Nocturnes (D.I):

I am weary with love, and thy lips

Give me therefore thy lips

That I may know sleep.

I am weary with longing,

I am faint with love;

For upon my head has the moonlight 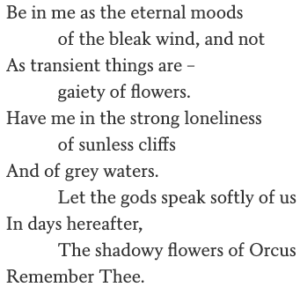 You can see that every word, simile, and metaphor serves a purpose that cannot be dismissed as superfluous or solely ornamental. They all carry with them a role to play in the intended effect of the text for the reader. This is exactly where you cannot underestimate the legacy of Imagism, rather than remain a prisoner to the frivolous inclusion of constrictive metrical conventions and every other word being an adjective, this movement stumbled out of late 19th-century verse so that modernist and postmodernist poetry could run.

I'm an English and Spanish student who just wants people to care about obscure things as much as I do. My hobbies include muffled, unintelligible screaming about theatre, poetry, and film.